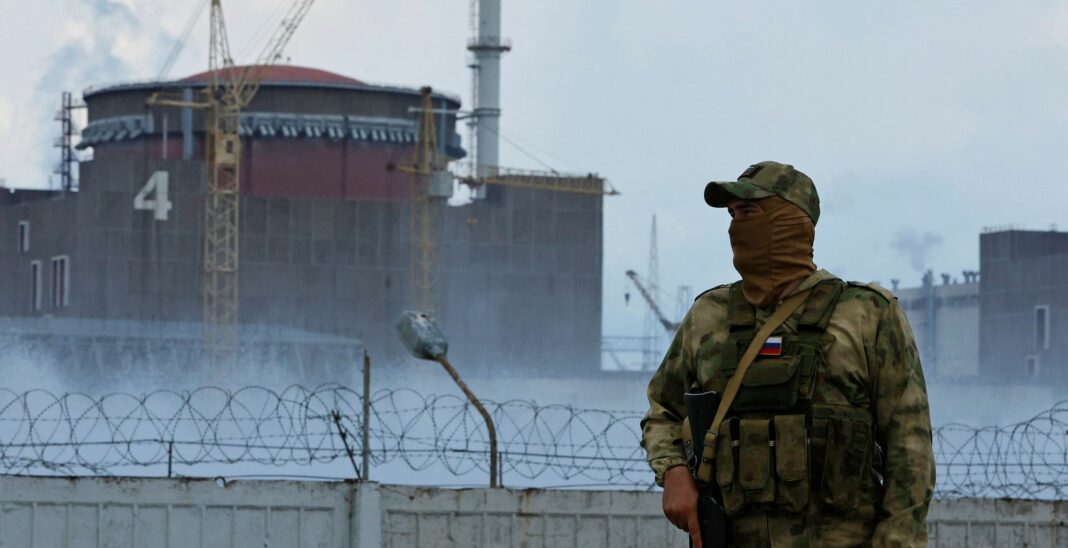 On this day 77 years ago, the U.S. government dropped the second atomic bomb in the center of Nagasaki, a Japanese city of more than a quarter of a million people with no tactical military value. The following article is about the rising threat of nuclear catastrophe today.

Right now, as the Ukrainian army, according to president Zelensky, has launched an offensive in the south, one of the biggest challenges they will face is recapturing the Zaporizhzhia nuclear power plant, the largest in Europe. It has six nuclear reactors that require careful monitoring, and six highly radioactive pools alongside a reservoir that eventually empties into the Black Sea. While neither side has an interest in triggering an all out nuclear disaster, the danger is inherent in the situation.

In March, the world held its breath as videos emerged showing a pitched battle being fought in the courtyard of the plant, causing damage to the building. It has since been occupied by Russian forces, who have set up artillery on the site. Ukrainian forces tried to attack the guns, causing damage to the wall of the reactor in the process. The head of the UN’s nuclear agency labeled the situation “completely out of control.”

The Zaporizhzhia nuclear power plant is essentially a nuclear bomb, whose energy is released slowly through a careful balancing act that is easily disrupted. The dangers of disrupting this balance are clear in the hundreds of square miles of wastelands that still surround Chernobyl and Fukushima following the nuclear catastrophes in 1986 and 2011. Zaporizhzhia is an example of how the threat of nuclear catastrophe, even in unconventional ways, is heightened by the new Cold War emerging in capitalism’s age of disorder.

As the U.S./China cold war reshapes the global economy, supply chains, and geopolitics, bringing an increased risk of armed incidents and regional wars, the ruling class is whipping up support for nuclear rearmament. At the height of Trump’s nuclear threats against North Korea, polls showed a third of American voters were open to a preemptive nuclear strike. For decades, the U.S. has cultivated militarism and nationalism in South Korea, resulting in a stunning poll showing 71% support for nuclear armament. With tacit support from the U.S. government, right-wing politicians in Japan are pushing to revise their 1971 constitution that explicitly bars nuclear weapons from being deployed on Japanese soil.

“All of the nuclear-armed states are increasing or upgrading their arsenals and most are sharpening nuclear rhetoric and the role nuclear weapons play in their military strategies,” said Wilfred Wan, Director of SIPRI’s Weapons of Mass Destruction Programme. “This is a very worrying trend.”

One of Putin’s regional allies is Alexander Lukashenko, the dictator of Belarus whose country shares hundreds of miles of borders with Ukraine, Poland and Lithuania, stretching to within 50 miles of the Russian enclave-fortress of Kaliningrad. In June, Putin promised to allow Belarussian fighter jets to be upgraded in Russia to carry tactical nuclear weapons, and the deployment of nuclear-capable cruise missiles. India and Pakistan are conducting nuclear-capable missile tests against each other at a rate of two per month. The U.S. government claims China is constructing 200 new missile silos, expanding its mobile-launch capability, and upgrading its submarine fleet.

Since 1945, the United States has manufactured and deployed more than 70,000 nuclear weapons, costing five times more than the amount needed to house every homeless person over the same period. The Soviet Union produced similar numbers. At the height of the old Cold War, 84,000 nuclear weapons were in service. Today, the U.S. and Russia still account for the vast majority of the roughly three thousand nuclear weapons that remain on high alert.

Despite the fact that capitalism and Stalinism both recognized that nuclear war would be a total global disaster including for their systems and power, nuclear war almost happened. Almost a dozen high ranking agents of U.S. imperialism publicly attribute “luck” as the main reason nuclear arms have not been used since 1945. Furthermore, the existence of these weapons has not made war unthinkable. Egypt and Syria attacked nuclear-armed Israel in 1973, Argentina seized the Falkland islands from nuclear-armed Britain in 1982, and in 1999, nuclear-armed Pakistan mounted an incursion into a region Kashmir occupied by nuclear-armed India.

Imperialism’s Dangerous Quest to Use the Bomb

Obama was the first to update formal policy to leave open the possibility of a U.S. nuclear first strike. Trump pushed the needle further, making the “first use” language more vague and expanding potential scenarios to include non-nuclear armed countries, cyber attacks, and “biological attacks” – a dubious concept given Trump’s scapegoating of China for COVID. On the campaign trail, Biden pledged to return to the pre-Obama policy of deterrence, but has refused to actually do it in office.

Putin has followed suit. In June 2020, Putin revised Soviet-era nuclear doctrine to be more vague and conditional, while also making overt threats to use them during the annexation of Crimea in 2014, against Danish missile defense warships in 2015, and in the event of Ukrainian attacks on Crimean ports during the 2022 Russian invasion. China is actually the only nuclear-armed country that still formally maintains a “no first use” policy, though many of its newer weapons systems are designed for a first strike scenario.

In 2021, American military analysts were shocked when China tested its Fractional Orbital Bombardment System, which includes a nuclear-capable, hypersonic reentry vehicle. While these weapons are not new, they offer the possibility to launch an attack from a trajectory that is not covered by American early warning detection systems. The U.S.’ eighteen active-duty, $2 billion dollar, nuclear missile submarines function similarly. Given that there is no way to stop a conventional nuclear attack, there is no use for these weapons systems except to attempt a “first strike” attack that knocks out your opponent’s ability to shoot back.

In addition, both the U.S. and Russia are exploring the possibility of a “limited nuclear strike.” This would include detonating nuclear weapons over armies rather than cities, remote military installations, etc. The U.S. is spending hundreds of millions modernizing 2,000 B61 nuclear bombs to include a dial that allows the user to set the blast radius from a few city blocks up to 3.3 times the bomb dropped on Hiroshima. These efforts are designed to make nuclear weapons usable, and rest on the dangerous assumption that one side would break the chain of escalation before an all-out conflict.

The Danger of Mistakes

During the Cuban Missile Crisis in 1962, military leaders in the U.S. argued for a preemptive strike against Cuba based on the false assumption that the bombs were not assembled. In fact, 100 weapons were already operational. In 1983, at the height of the Cold War, a stunned Soviet air defense technician watched what appeared to be a massive incoming attack. He disobeyed orders, and waited to confirm the attack. It turned out his equipment was seeing solar flares, not nuclear missiles. A month later, the Soviet Union launched nuclear bombers believing it was facing an imminent attack when Ronald Reagan used the term “nuclear strikes” to describe a massive, unannounced NATO military exercise.

Even if both imperialist camps have nothing to gain from nuclear attacks, since it’s too risky, the twisted logic of nuclear weapons can point towards war. In June, Putin put Russian nuclear forces on high alert. Western imperialism can only guess if this means Putin is preparing to attack, or if Putin believes he’s about to be attacked. If you believe you’re about to be attacked, why not attack first while your weapons are intact? Similarly, the new nuclear weapons further destabilize the situation. If you believe your opponent can launch an effective “first strike” that wipes out your nuclear weapons, why not use your nuclear weapons first? If someone tests the doctrine of “limited nuclear war” and it actually works, wouldn’t more nations try it?

It’s not likely that there will be a nuclear attack in Ukraine tomorrow, next week or even next month. The threat is increased as the world is divided into two rival imperialist camps, orbiting the U.S. and China, sparking old regional tensions and proxy wars, potentially in regions with massive nuclear power plants or even nuclear weapons. In addition, imperialism is developing a new generation of weapons designed to make nuclear war more palatable to their ruling classes. Capitalism has made the world a much more dangerous place.

Self described socialists like Bernie Sanders and AOC need to stop voting in favor of increased military spending and weapons packages and campaign against. We need to build an anti-war movement opposed to all forms of imperialism. In the 1960s, a massive anti-war movement forced the United States and Soviet Union into discussions about an out of control nuclear arms race. In the 1980’s, anti-nuclear proliferation protests made it less viable for U.S. imperialism to freely deploy warheads in Europe. The arms race in the emerging New Cold War offers nothing but destruction and despair – we need an international, working class centered, mass socialist movement against all forms of imperialism!