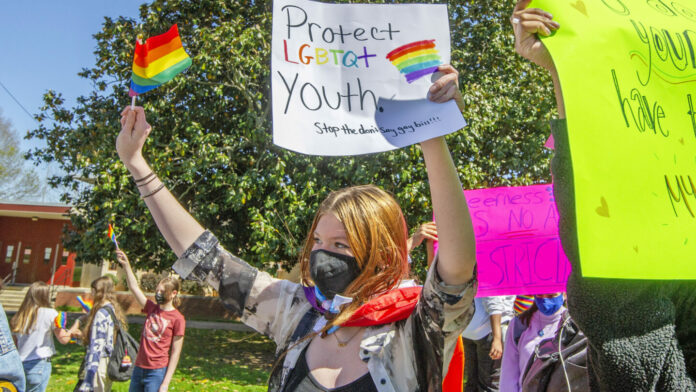 Queer people across the country are on the defensive against an onslaught of hate crimes and legislative attacks. Florida Gov. Ron Desantis recently signed the “Don’t Say Gay” bill into law which bans discussion around gender or sexual identity in schools, justifying the legislation by referring to our lives as “woke gender ideology.” He has claimed that age-appropriate books for children explaining who we are as gay and trans people are “pornographic material.”

More than a dozen states have put forward similar bills to “Don’t Say Gay.” Many more have considered or succeeded in restricting access to gender-affirming care for minors, passing bathroom bills, and banning trans students playing on sports teams that correspond to their gender identity.

Attacks on the rights and safety of LGBTQ people are part of an even larger reactionary assault. The recent draft Supreme Court decision that would overturn Roe v Wade also points toward potential threats to gay marriage and previous victories over anti-sodomy laws.

Pride is, for millions of queer people in the U.S. and internationally, a celebration of the diversity and culture of LGBTQ people. This year, it also needs to be the launching pad for a radical struggle rooted in mass movement against these injustices.

No Such Thing As A Gay-Friendly Corporation

Pride’s origins lie in the Christopher Street Liberation Day march called by the Gay Liberation Front in 1970 to commemorate the one year anniversary of the Stonewall rebellion. The year before, the anger of New York City’s LGBTQ community had boiled over at the Greenwich Village gay bar, The Stonewall Inn. Police harassment and arrests were an all too common feature of life in the LGBTQ community at the time. But eventually came the last straw, which led to an uprising which saw six days of demonstrations, protests, and rioting against the police and gay oppression more broadly. Those six days would lead to the formation of many activist groups, most prominently the Gay Liberation Front, who fought for queer liberation in the context of the mass civil rights and anti-war movements.

Today’s Pride events usually look very little like the original. They are dominated by floats and contingents representing banks and corporations while working-class queer people stand on the sidelines, in some places not even able to freely march in what should be our events.

Every June these companies see dollar signs where queer struggle should be and work tirelessly to make their brands look progressive. But companies like Starbucks will put together their own contingent while also investing in intense union-busting campaigns against their many queer workers. Disney puts out “celebrate Pride” TV spots but then financially backs the sponsors of the Don’t Say Gay bill. The only group these companies really work to protect is their shareholders.

Case in point: as attacks on LGBTQ people, particularly trans youth, have gained steam, companies are beginning to abandon their rainbow-themed aesthetics. Days after announcing it, insurance company State Farm trashed a program to distribute LGBTQ-themed books to community centers and libraries. The company’s chief diversity officer wrote in an email, “conversations about gender and identity should happen at home with parents. We don’t support required curriculum in schools on this topic.”

There is some pushback from below against these “rainbow capitalist” pink-washing campaigns. For instance, this year will be the fourth annual Queer Liberation March in New York City. This is a counter-protest to the deeply corporatized Pride parade and has seen tens of thousands of marchers each year fighting for a Pride free of corporations and banks.

Voting Blue Is Not It

The idea that voting blue would defend the rights and safety of trans people became a “lesser-evil” talking point in the run up to the 2020 election. The Democrats leaned into this sentiment and campaigned as the party that supports LGBTQ people. But a year and a half into the Biden presidency, we are no safer than we were under Trump – and in many ways we are less so.

Despite having the White House and a majority in both legislatures, they have made no honest efforts towards actually protecting our rights. They could have enshrined gay marriage into law but are instead leaving it vulnerable to reactionary attacks. They could pass the Equality Act which would prohibit discrimination based on gender and sexual identity in schools, housing, and more. Instead that bill has been stalled in Congress while trans youth are being prohibited from joining appropriate sports teams, receiving lifesaving healthcare, or even discussing who they are.

The leadership of the most prominent LGBTQ non-profits are tied at the hip to the Democratic Party and have not been able to provide real solutions. Rather than questioning the capitalist system at the root of our problems, they are completely beholden to it. All they can offer are piecemeal battles fought completely through the same court system that has led to the attacks on abortion. The courts have never been a fair playing ground for the oppressed – our power is and always has been in the workplace and the streets. We need to put together a bolder fight, independent from the Democrats, taking cues from the rich history of queer anti-capitalist struggle, if we are going to make real gains.

This Pride, We Demand More

This year’s Queer Liberation March in NYC is titled “For Trans and BIPOC Freedom, Reproductive Justice, and Bodily Autonomy.” These are important slogans that should be taken up at radical Pride events and contingents in all cities. They are also only the start. If we are going to create the kind of fighting Pride that marches forward in the spirit of Stonewall towards real victories, then we should be taking up even more concrete demands that point to our united power as working people.

Pride in 2022 should be about the codification of Roe on a federal level. It should go beyond that and raise the call for Medicare for All which would need to include free abortion on demand and full access to gender affirming care. It should be firmly opposed to both the physical and legislative attacks on Black and POC queer people and trans youth. As a part of that, we should call for the immediate passage of the Equality Act to give us a starting point from which to fight discrimination.

If we’re going to put together the kind of fightback needed to defend and advance our rights, then we are going to have to connect it with broader battles of the working class. We should build labor contingents at Pride marches that include organizing Starbucks and Amazon workers. A mass movement for these demands would need to utilize escalating tactics like protests, occupations, walkouts, and strikes for which the labor movement would play an essential part. That kind of radical movement would need to be completely independent from the Democratic Party and their NGOs.

Instead it should call into question the foundations of the capitalist system built on inequality and division, and fight for socialism and a world free of homophobia, transphobia, and all forms of oppression.