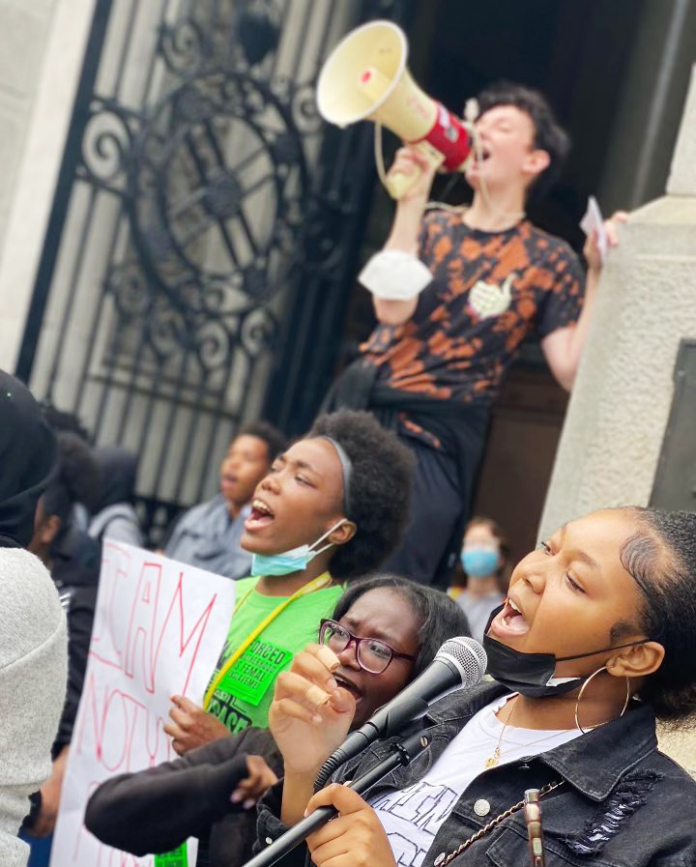 On May 13, hundreds of high school students from five different middle and high schools in Philadelphia participated in a walkout for abortion rights. Some schools only had 20-30 students walkout, while others brought over a hundred. They all converged for a morning rally at LOVE Park. Students spoke energetically about the need to expand abortion rights, as well as comprehensive and inclusive sex education and full staffing of nurses and counselors in schools.

Socialist Alternative played an important role in this walkout, talking to middle and high school students, and helping connect students from different schools. Students in Philadelphia were not alone in this walkout; they were joined by high school and college students across the country.

Young people have historically played a vital role in movements for change and justice. In our short lifetimes, young people today – including myself –  have been born into myriad crises: from a pandemic that shut down schools and interrupted our learning, to the imminent threat of climate change, in the presence of a decade long economic downturn with rising rates of inflation affecting the living standards of working families. The connecting thread between all these crises is the system of capitalism. Being a young person living under capitalism has meant always looking toward another crisis, or the worsening of one that’s already happening.

While the walkouts on May 13 were amazing and inspiring, they weren’t the end of our movement. 500 students were back out on the streets on May 25 demanding action on abortion rights.

The leak of the draft ruling has given us a short but crucial window of time to pose a fightback, and we must use this time to organize! We need to escalate future actions in order to go all out to defend Roe. We should organize more walkouts, but involve teachers, parents, and community members, encouraging them to walk out of work or have a lunchtime rally.

We can look to the recent student climate strikes as an example of how we can coordinate future national days of action. We can also look to the workers at Tufts Medical Center in Boston who walked out of their workplace for abortion rights in early May as well. Our teachers and working parents have power in their workplaces, to shut them down and stop those profits; they must take inspiration from the walkouts at schools and link them to their own workplaces to broaden the struggle and build our movement.

Students Have Always Fought Back

Historically, movements that begin with students have spread beyond schools and inspired workers to move into struggle as well. We saw this in France in May of 1968 when students occupied and protested at their schools around academic demands. This energy quickly spread to factories and workplaces across the country, in solidarity with the students but extending the demands to working conditions.

In order to spread the fight for full reproductive rights today, we must make a conscious effort to expand and escalate the fight beyond student walkouts. This will mean having conversations with workers and teachers, just like the students did in 1968, about how their interests align with students’ demands and the importance of standing in solidarity.

Students and young people, historically, have the most forward thinking and progressive ideas in movements. While we need to spread the struggle beyond just young people and students, we shouldn’t compromise these ideas, but rather push for them to be taken up by the broader movement. Many young people are, correctly, making the connection with attacks on abortion rights and attacks on queer and trans rights. The right wing has been on the offensive, stripping away working class people’s bodily autonomy, whether it’s attacks on abortion or preventing trans youth from safely transitioning. Access to abortion does not just affect women, but it affects trans and non-binary people as well. We must push for solidarity between women and queer people in the fight against all gender-based oppression.

We Need A Fighting Movement

Across the country, thousands of people hit the streets with less than 24 hours notice at marches the day after the draft ruling was leaked, showing the energy and willingness of working and young people to fight. However, this energy inevitably dissipates without mass organizations willing to channel it.

Major women’s organizations, like the Women’s March, NARAL Pro-Choice, and Planned Parenthood, have not even pretended to fight. Instead of putting energy into mobilizing millions of people into the streets, these organizations have continued a legalistic strategy of attacking anti-abortion legislation with lawsuits, and lamented about  a coming “post-Roe” world. These organizations are unwilling and unable to actually show a way forward because of their ties to the Democratic Party and their corporate donors, leaving them more beholden to the likes of Joe Manchin and Kyrsten Sinema than to working-class people.

We need mass organizations willing to take up bold demands and put forward a class struggle, movement-based approach to fight for not just legal abortion, but free and accessible full reproductive care through Medicare for All, including gender-affirming care. We need comprehensive and inclusive sex education in schools to actually prevent unwanted pregnancies, as well as free STI testing and fully staffed nurses at all schools.

Finally, working class people have been fighting protect abortion rights for over 50 years, but attacks on our rights are inevitable under the capitalist system that profits off of controlling and exploiting us. We need to fight to overturn this system and build a society run by and for the working class where we have actual control over our lives — a socialist society. Capitalism cannot exist without gender-based oppression and that is why our feminism must be socialist!