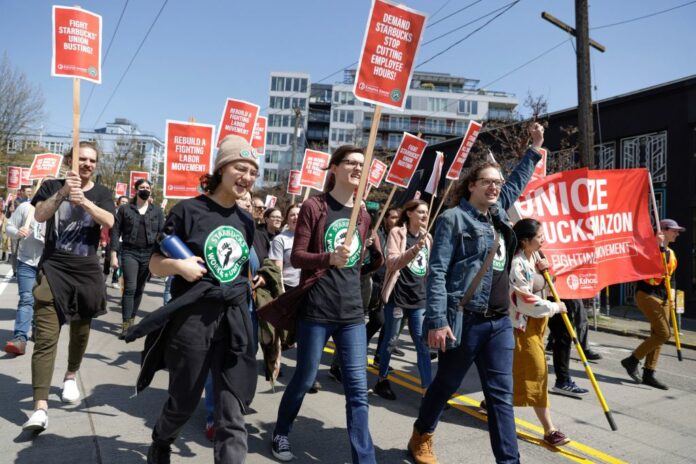 Starbucks has fired at least 21 worker-organizers since February as returning CEO Howard Schultz reclaimed his throne in April. This spate of firings is a coordinated attack against Starbucks workers in over 250 shops across 35 states who have won over 100 of the union elections held so far.

The unexpected breakthrough of Starbucks organizing has galvanized service, retail, and logistics workers across the U.S. who are turning toward unions as a path forward in an unstable economy marred by the COVID-19 pandemic, rising inflation, and supply-chain issues affecting the availability of basic consumer goods like baby formula. New organizing is taking hold at Target, Etsy, Apple stores, Dollar General, and Trader Joe’s among others following Amazon Labor Union’s longshot April victory at the JFK8 Fulfillment Center in Staten Island, New York.

Schultz, once on a short-list for U.S. Labor Secretary during Clinton’s 2016 presidential campaign, has embraced his union busting roots, declaring war on the “outside force” of “so-called workers” organizing for a union. In a leaked video of an April meeting with executives and regional managers, Schultz urged managers to take a more aggressive approach to undermine the wave of organizing across the company, declaring in a virtual town hall that the corporation is “being assaulted in many ways by the threat of unionization.”

Schultz’s most recent move, attempting to offer expanded benefits exclusively to shops that are not engaged in union organizing, is both a clumsy attack on the movement and a recognition of some of the demands put forward by the union for a $15 minimum wage, a tip option for mobile orders, and faster sick time accrual.

Starbucks’ branding as a champion of refugees and immigrants, LGBTQ+ rights, and the Black Lives Matter movement has been increasingly discredited as hundreds of the company’s young, progressive-minded and often LGBTQ+ union leaders are attacked by the corporation for demanding higher pay, better benefits, and improved working conditions.

Profits On The Line

Corporate executives and major shareholders smell blood in the water as the Dow Jones and S&P 500 face their biggest losses since the early months of the COVID-19 pandemic. The U.S. Chamber of Commerce and figures like Schultz and Jeff Bezos have become increasingly vocal in their opposition to the National Labor Relations Board’s (NLRB) recent rulings in favor of unions as the agency moves to outlaw mandatory anti-union ‘captive-audience’ meetings

In a May 10th op-ed, Glenn Spencer, Senior VP of the Employment Policy Division of the U.S. Chamber of Commerce cried “regulatory overreach” as NLRB General Counsel Jennifer Abruzzo weighs revisiting various precedents in U.S. labor law including a previous ruling that enables big tech corporations like Uber to classify gig workers as ‘independent contractors’ rather than employees.

As runaway inflation and rising labor costs threaten profits, major corporations are looking toward the unionization push at Starbucks and Amazon for lessons to stomp out union organizing before it spreads across the retail, service, and logistics industries. It’s crucial that the new labor movement prepares for the coming wave of aggressive union busting ahead of us and emphasizes the need for workplace actions like strikes and work stoppages to fight for the reinstatement of fired pro-union workers and leaders.

The NLRB ruled on May 10th that seven Starbucks workers in Memphis, Tennessee who were fired in February for supporting the union are to be reinstated immediately by the company with back-pay.

“They’re not going to fire an employee directly for unionizing, because they are aware of how illegal it is. Instead, they will try to enforce something that was never enforced for whatever reason.” Memphis 7 worker Beto Sanchez explained in a recent interview.

“The reason they wanted to fire me was because I had a mask off while I was off duty, which doesn’t make any sense. And the same goes for the rest of the seven, as well as other workers across the U.S. that have also been retaliated against. And it’s something that’s not new between Starbucks and other corporations.”

Instead of counting on the NLRB to act as an impartial referee, Starbucks workers across the U.S. rallied, organized, and walked off the job calling for the Memphis 7 and other fired union leaders to be reinstated, presenting a credible threat to Starbucks’ profits and public image. The reinstatements were only possible because pro-union workers relentlessly exposed Starbucks’ union-busting and used what tools they had at their disposal to push back on the company’s attacks on workers.

Sanchez and Memphis 7 worker LaKota McGlawn rallied on Starbucks’ home turf in Seattle on April 23rd with fired workers from New York, Kansas, Michigan, and Washington at the “Fight Starbucks’ Union Busting” rally and march organized by Seattle Starbucks Workers United, Socialist Alternative, and Seattle Councilmember Kshama Sawant. The rally was endorsed by several major unions including the Martin Luther King County Labor Council which represents over 150 unions in Seattle with rank-and-file members passing resolutions in their locals to endorse the rally.

These reinstatements were not guaranteed by a presently labor-friendly NLRB. The NLRB can quickly shift in the opposite direction under increasing pressure from corporations and investors with profits on the line in an increasingly volatile economy.

For example, Refresco pressured the NLRB to overturn United Electric’s victory at the company’s New Jersey plant last year simply because an appointed interpreter arrived five minutes late to the polling location. Similarly, the NLRB agreed to transfer the certification of ALU at JFK8 in Staten Island to the angency’s Phoenix office in a concession to Amazon after the company accused the Brooklyn office of supporting ALU and alleged voter intimidation from ALU organizers. Cornele Overstreet, the director of the Phoenix office, announced that the complaint could serve as grounds for the NLRB to overturn the election.

Keep Up The Pressure

The Memphis 7 victory is not an indication that corporations like Starbucks and Amazon will back down from firing pro-union workers. Amazon has taken a more aggressive approach following ALU’s defeat in their second election at the LDJ5 Sortation Center in May, firing at least six pro-union workers including ALU organizers Mat Cusick and Tristan Lion.

Amazon sent a clear message to management by firing six senior managers at JFK8 who failed to repress ALU’s organizing at the facility — making it abundantly clear that immediately crushing any hint of union organizing is the top priority for senior management at facilities across the U.S. where workers have been inspired by the example of ALU and Starbucks Workers United.

To win a union and lasting gains for the working class, the new labor movement has to mobilize relentlessly to defend every victory and confront every instance of retaliation against pro-union workers or risk facing corporations on their terms in endless court proceedings and litigation over every step workers take to push the movement forward.