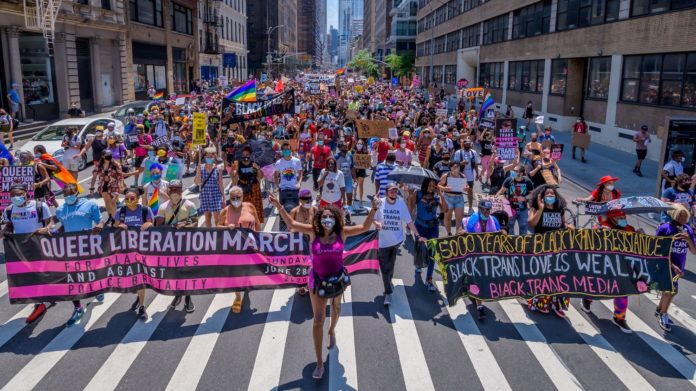 On June 28, 2020 — exactly 50 years since the first pride march in NYC — 50,000 New Yorkers marched through the streets, past the Stonewall Inn, and to historic Washington Square Park at the Queer Liberation March (QLM) for Black Lives and Against Police Brutality.

Just like the first Christopher Street Liberation Day March in 1970, there was no corporate pride this year — only a radical march. And Socialist Alternative NYC went all out for its most successful pride ever.

Building on the #JusticeForGeorgeFloyd movement and the anger that has built up during the COVID-19 lockdown, the Queer Liberation March has catalyzed an ongoing re-politicization of the LGBTQIA+ movement. The QLM encouraged political speech, making space for left groups and radical politics while rejecting contingents of cops in the march and corporate sponsorships.

As the New Yorker wrote, “It’s as if the COVID-19 meteor killed off a twelve-million-dollar dinosaur [corporate pride], and a smaller, more resourceful organism survived to fill the parade-size void.”

In the shadow of George Floyd, Breeona Taylor, Nina Pop, Layleen Polanco, Tony McDade, and too many more, QLM was politically in tune with what this moment demanded: fighting for the lives of the Black and trans community, who have been at the forefront of the best elements of the LGBTQIA+ movement since its inception — like Marsha P. Johnson and Sylvia Rivera. Given its grassroots character, QLM quickly adapted to the reality of protest during COVID-19, and it wasn’t only masks and hand sanitizer; the QLM livestream was added to assist those who could not safely join the protest, and attracted nearly 400,000 views in a single day.

Socialist Alternative co-endorsed the march and worked within the Reclaim Pride Coalition, the organization behind QLM. The Queer Liberation March was initially launched as a counter march in 2019 to the corporatized, pinkwashed, heteronormative “NYC Pride.”

Reclaim Pride was organizationally backstopped by Housing Works, a HIV/AIDS and housing non-profit. In the last year, Housing Works employees have been fighting for union recognition, including members of Socialist Alternative. In a victory fiercely opposed by the Housing Works CEO Charles King, the Reclaim Pride Coalition endorsed the union organizing drive. Our member Brian Grady, a member of the union organizing committee, had the courage to debate his CEO over a virtual meeting — and won the endorsement vote. Reclaim Pride’s endorsement resolution for the Housing Works Union read, “Workers’ rights are queer rights, and labor unions are a human right. Housing Works’ radical tradition has been sullied by [Housing Works CEO] Charles King’s behavior and attempts to use its long history of work in the LGBTQ community to pinkwash its union-busting efforts, which have only ramped up since Housing Works Union went public in October 2019 with the support of over 50 New York elected officials.”

The Housing Works Union endorsement concluded with the powerful demand that Housing Works management immediately stop its anti-union campaign. We need more acts of worker and LGBTQIA+ solidarity like this!

Building on the Housing Works Union endorsement, Socialist Alternative launched the first-ever Labor Contingent at QLM, working with members of DSA’s Labor Caucus to bring out around 75 people, from members of the New York State Nurses Association (NYSNA), United Auto Workers (UAW), including the New Museum Union, as well as Retail Workers and Department Store Union (RWDSU), United Federation of Teachers (UFT), Teamsters, and many other locals. We demanded that the Mayor and City Council defund the NYPD and fund health and education. We marched in recognition that Black Lives Matter and an injury to one is an injury to all. Marching as a Labor Contingent helped link up the struggles for racial equality, queer liberation and workers’ rights. Socialist Alternative is committed to a future where our movements unite as one and build a new party of the multi-racial, multi-gendered working class.

Shamefully, the NYPD attacked peaceful protestors at the end of the march, as Black and trans activists led a speak-out. The cops brutally overreacted, pepper spraying protesters and violently smashing their batons on protestors. In exchange, the crowd yelled at cops to “go home” and eventually forced the cops out of the area.

Jake Tolan, a QLM organizer said, “I wish that I could say what I saw today was shocking, but how could I reasonably expect anything else from the NYPD? Fifty-one years after the Stonewall Rebellion, the NYPD is still responding to peaceful, powerful, righteous queer joy with pepper spray, batons, and handcuffs.” On a day when Socialist Alternative chanted “No pride for some without liberation for all,” pride was not cancelled in 2020, it was reclaimed.