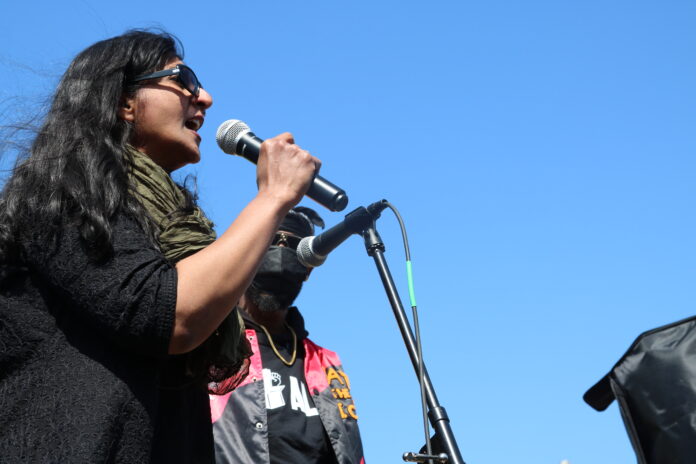 On April 24th, Seattle’s socialist city councilmember Kshama Sawant stood alongside Amazon Labor Union interim president Chris Smalls, ALU lead organizer Derrick Palmer, President of the flight attendants’ union Sara Nelson, and others to support the ongoing unionization effort at Amazon sorting center LDJ5. The workers at LDJ5 are set to vote on unionizing this week, which will determine whether or not they join the nearby fulfillment center JFK8 which voted to unionize last month. Below is the full text and video of Kshama Sawant’s speech.

“Brothers, sisters, siblings – brother Chris, brother Derrick, sister Sara Nelson, it is such an honor to be here with you as the socialist city councilmember from Seattle, and to bring you greetings from the working people, union members, and socialists in Seattle – who became the first city to win a tax on Amazon in the nation!

You know, Amazon’s brutal working conditions made it ripe for the union struggle that is going on, but there was nothing automatic about ALU’s victory at JFK8. It is important, imperative, that those of us who want to build the union at Amazon and rebuild the proud traditions of the American militant labor movement, that we learn the lessons from JFK8.

Lesson number one – lead relentlessly with concrete and clear demands to win over your fellow workers. [Second,] carry out unstoppable shop-floor organizing with workers talking to workers. And last but not least, name the enemy! Be very clear – the bosses, the billionaires, the executives, the major shareholders, are not on our side! They are not busting the union because they don’t know how to make profits. They are busting the union because they know that when workers get organized, it is bad for billionaire profits!

This method that has been used by ALU at JFK8, I would call it class struggle strategy, and it stands in stark contrast to much of what has prevailed in the labor movement for the last forty years – which I would call business unionism. That’s the false idea that somehow you can win over the bosses with moral arguments, but not by mobilizing the membership, taking strike action, doing work stoppages, in short doing everything that JFK8 did. And that is the lesson we need to learn – that the power in the bargaining room comes from worker power in the workplaces and on the streets!

I am very happy to hear that Senator Bernie Sanders and Congresswoman Ocasio-Cortez met with workers this morning. I would urge them, I would urge every self-described pro-union elected official in Congress, to immediately act to bring bills to make sure that labor laws are enforced when these corporations get giant subsidies. Put forward legislation forward in Congress right now to tax big corporations like Starbucks and Amazon!

And we have a message for labor leadership throughout the nation as well. We need a labor leadership that is not in bed with union-busting establishment politicians! In fact, we need a new political party for working people, and in addition, we need a revival in the labor movement itself.

It is very important that the ALU has in their constitution that executive board members will take home a salary no more than the average wage of their membership. This is the absolute bare minimum first step for accountability, and it is almost nonexistent in the labor unions! I, as an elected representative of working people and rank-and-file member of the teachers’ union, as a city councilmember I get paid $146,000 per year. I take home just $40,000 and the rest after taxes goes into a solidarity fund for labor and social struggle. And out of that solidarity fund, I am so deeply proud and honored to be able to donate $20,000 to the ALU struggle.

Let’s make sure that LDJ5 is a victory, because we know that if they smell a little bit of an opening, these bosses will try to seize momentum from us, so it is a collective responsibility on all our shoulders to make sure we support the workers at LDJ5, we support the Amazon Labor union, to make sure that this is a huge victory in this election and a crushing defeat for Amazon and Jeff Bezos.”