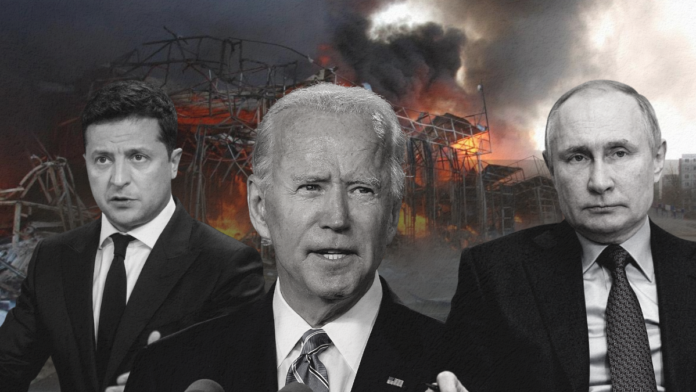 The Russian military’s invasion of Ukraine has provoked nationalist drum beats around the world. Socialists face huge pressure to side with the capitalist classes of the nations in which they reside, rather than with the global working class.

Elsewhere Socialist Alternative has challenged the pressures for socialists to line up behind the U.S. and NATO. In particular we have criticized Senator Bernie Sanders and Representative Alexandria Ocasio Cortez for backing sanctions against Russia and wavering on the question of U.S. military intervention in Ukraine. However it’s also important to critique the opposite approach: a vulgar anti-imperialism that simply places a plus sign where U.S. imperialism places a minus sign. This is all the more important in inter-imperialist rivalry, where a crude rejection of U.S. imperialism can turn into a defense of Russian imperialism.

In the United States one of the biggest purveyors of this sort of vulgar anti-imperialism is the Party for Socialism and Liberation (PSL). The PSL has a long history of championing any figure, no matter how rotten, who comes into conflict with U.S. imperialism, including Slobodan Milosevic, Saddam Hussein, Robert Mugabe, Mahmoud Ahmadinejad, Muammar al-Qaddafi, and Bashar al-Assad. They’ve championed the Chinese state violently crushing the Hong Kong democracy struggle in 2019.

Their current attitude towards the war in Ukraine represents a continuation of this wrong approach. They present the conflict in Ukraine as solely the responsibility of the U.S. and NATO. What criticisms they have of Putin are presented as mistakes of an ally, rather than the actions of a reactionary imperialist. And, like the approach of Sanders and Ocasio Cortez, their solution relies on diplomacy of imperialist powers rather than the power of the international working class.

The PSL responded to the invasion of Ukraine, in a statement on February 24, by pinning the sole blame for the conflict on NATO and U.S. imperialism. They formally disagree with Putin’s decision to invade Ukraine, but nonetheless excuse his actions as a response to Russia’s “legitimate security concerns”. The real responsibility, they claim, lies with “decisions made by NATO powers at every key juncture since the end of the Cold War [that] set the region on a collision course that was bound to come to a head sooner or later.”

This is a completely one-sided account of what is actually a rivalry between competing imperialist powers. During his first decade in office, Putin collaborated closely with NATO and U.S. imperialism, assisting with the war in Afghanistan. But, as U.S. hegemony has gone into crisis, Russia and China have built themselves up as rival powers. This multi-polar inter-imperialist rivalry is what set the region on its collision course.

In a response to Biden’s State of the Union address, the PSL rightly called out the hypocrisy of Biden’s claims to be standing in the interest of “democracy against autocracy”. They correctly point to the U.S.’s propping up of dictatorships like Saudi Arabia, its defense of Israeli state repression of the Palestinians, and its support for coups and coup attempts in Honduras and Bolivia. But, when it comes to Russia’s alleged “legitimate security concerns”, the PSL’s hypocrisy-detectors seem to be malfunctioning.

At each step in the U.S.-Russia rivalry, the PSL rushes to take the official line of Russian imperialism at face value. In 2013-2014, a mass protest broke out in Ukraine, the Maidan Revolution, against the pro-Putin president Viktor Yanukovitch. After first trying to violently suppress the movement, Yanukovitch eventually fled. Without any independent, working-class organization in place, however, U.S. imperialism took advantage of the movement to prop up pro-western politicians, including current president Zelensky. When those politicians carried out measures against the Russian-speaking population of Ukraine, Russian imperialism leaned on that opposition to annex Crimea and prop up the breakaway regions in Donetsk and Luhansk.

But, to hear the PSL’s account, the mass protests against Yanukovitch never happened, and his ousting was solely a U.S. coup. Meanwhile, the annexing of Crimea is presented as a purely humanitarian effort on the part of Russian imperialism. And the current invasion of Ukraine is explained in terms of “the plight of ethnic Russians, especially those in the Donbas region of Eastern Ukraine.”

This approach of the PSL applies to their entire take on the U.S.-Russia rivalry. In talking about Syria, they ignore the existence of the mass uprising in 2011 against dictator Bashar al-Assad, and they ignore Assad’s brutality in crushing that movement, backed by Russian imperialism. They focus on U.S. imperialism backing reactionary fundamentalist forces later on when that uprising turned into a civil war.

In the U.S.-Russia rivalry, both imperialist powers opportunistically grasp onto injustices committed by the other, while supporting popular uprisings against the other power’s allies. The job of socialists should be to condemn the atrocities and support the uprisings while exposing the hypocrisy of both powers. But the PSL doesn’t do this. Instead they portray one imperialism as an act of resistance against the other.

The PSL’s approach to Russia translates to some bizarre historical revisionism: as the revolutionary politics of Lenin, the bureaucratic counter-revolution of Stalin, and the modern capitalist imperialism of Putin, get blurred together into one incoherent mass.They correctly hold up Lenin’s support for the right of nations to self-determination but then claim that “from 1922 until the dissolution of the Soviet Union, the peoples of Ukraine and Russia lived in peace.”

This period was dominated by a Stalinist bureaucratic counter-revolution that, among other things, reversed Lenin’s approach with a whipping up of Great Russian chauvinism. The Ukrainian revolutionaries in the Borotba group who were won over to Bolshevism by Lenin’s approach were physically liquidated by Stalin.

The PSL’s portrayal of the Soviet fight against Hitler as a “partnership” between Russians and Ukrainians is also misleading. As Leon Trotsky pointed out, Stalin dropped the demand for self-determination in the 1930s in order to form an alliance with the Polish government, which was occupying Western Ukraine. Only after Stalin signed a nonaggression pact with Hitler did he champion the liberation of Western Ukraine when it served as a pretext to invade Poland.

The PSL blame the growing national conflicts in Eastern Europe on “the bourgeois-led counter-revolution that dissolved the Soviet Union.” But it was Stalinist bureaucratic handling of national minorities that led to the break-up of the Soviet Union. The movement against Stalinism in Ukraine was led initially, not by capitalists, but by miners in Donbas, who initially wanted genuinely democratic socialism. But with independent working-class organization physically liquidated by decades of Stalinist totalitarianism, the forces of capitalist restoration were able to direct the movement. Capitalist restoration worsened the national conflicts, but didn’t create them.

While the PSL blames “the animus and hostility” between different nations on “the end of socialism and the beginning of capitalist competition” they gloss over the fact that capitalist restoration occurred in Russia as well as the breakaway republics. Putin’s Russia isn’t a socialist country fighting for peace and brotherhood. It’s an imperialist power and Ukraine, just as before the Russian Revolution, is being used as a chess piece in a fight between rival imperialists.

In its February 24 statement, the PSL argues that “The role of the U.S. antiwar movement is . . . to present an independent program of peace and solidarity and anti-imperialism.” This is correct but it’s not the approach the PSL actually adopts. Rather than relying on the international struggle of the working class, the PSL grabs onto whatever force is at odds with U.S. imperialism at any time.

A more recent PSL statement from March 11 puts forward a program for the anti-war movement. Even the radical-sounding demands in their program, like disbanding NATO, are disconnected from any movement that could force imperialism to do this. Instead they appeal to the United Nations Charter of 1945. This cedes the fight against imperialism to the imperialist powers themselves.

Socialist Alternative operates internationally, as part of International Socialist Alternative. Our members in Russia have been active in the anti-war protests in the country, and have faced state repression from the Putin government. These protests, along with the mass uprisings in Belarus and Kazakhstan, point to the power the working class has to end imperialist war.

We call for the withdrawal of Russian troops and opposition to U.S. and NATO imperialism. We support the right of the Ukrainian people to resist imperialism, but call for the forming of democratically run, multi-ethnic defense committees linked to working-class structures, like the unions that the Zelensky attacked prior to the war. This represents a genuine working-class approach to fighting imperialism.