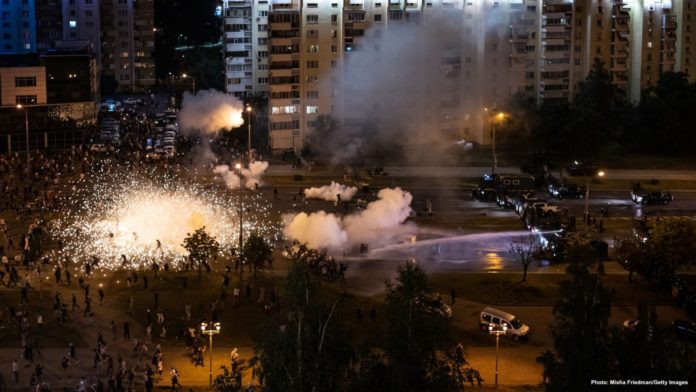 At the time of writing, protests in Belarus against the obvious falsification of the results of Sunday’s Presidential election seem to be spreading, and are meeting with increasing repression.

In Minsk, Brest, Grodno and a dozen other cities thousands have come out onto the streets and in many places have been building barricades. In response, the regime is using the riot police and now even the elite anti-terrorist troops “Almaz”.

Videos show the police violently beating protesters, whilst tear gas and stun grenades are being widely used. Many have been wounded by rubber bullets. On Sunday, it is reported, thousands were detained, including at least 17, mainly Russian, journalists. In a scene reminiscent of those in Tiananmen Square, China one protester was run down by a police van.

Drivers in Minsk are driving through the city hooting their horns in support of the opposition, and in many cases trying to form traffic blockages to stop the transit of police vehicles. In other places drivers circle around police vehicles to stop their movement. Tonight riot police are using taxis and ambulances to get into the crowds of protesters.

Most significantly workers at the Belarusian Metallurgical Factory (BMZ) have declared a strike saying they want “to live, not just exist”. As soon as the announcement was made, riot police approached the factory and it is reported at least sixty workers have been detained. A call has been made for the strikes to spread.

Meanwhile it has just been reported, Svetlana Tikhanovskaya, the only opposition candidate allowed to stand has not been seen for five hours after she visited the electoral commission.

These protests have been provoked by Sunday’s announcement that Alexandr Lukashenko “won” 80% of the vote in the election. This clearly fabricated figure is in complete contrast to the mood of the population, who have been growing increasingly angry at Lukashenko, who has been in power since 1994. Not only has a devastating economic crisis developed in the country, he is also a “virus denier”, claiming that a glass of vodka a day will keep the virus at bay. Consequently, infection rates are four times higher per head than in neighboring Ukraine.

The traditional opposition failed to provide any alternative in this election, claiming they were concerned about people’s safety during the pandemic. Feeling, however, the growing opposition in society, a section of the ruling elite — a former Ambassador and a banker — announced they would stand. This led to a mass turnout of people wanting to sign their nomination papers. To prevent this support being turned into votes, one was arrested, the other forced into exile. A third candidate, a well-known blogger was also arrested. It was his wife, Svetlana Tikhanovskaya, who then announced her candidacy.

This accidental oppositionist soon saw mobilizations of thousands of people in support of her campaign, in which she simply promised that if elected she would release all political prisoners and organize new, democratic elections. Lukashenko believed that as a woman, she was unable to be President. But all indications are that the population did not agree. Where voting figures from individual stations have been revealed, they show that it wasn’t Lukashenko that gained 80%, but Tikhanovskaya.

The fact that the only opposition candidate was accidental, and even those that had originally been prepared to stand were from the ruling elite demonstrate the urgent need for a genuine left, working class alternative to be built, with democratically elected committees of action to intervene in such protests with demands that reflect the real interests of working people, for democratic rights and an end to the dictatorial regime, for proper wages and support for free healthcare and education, for a democratic and independent socialist Belarus. Of course, the strike started at the BMZ should be turned into a national strike led by democratically elected workers’ committees.

This is the lesson from the events in neighboring Ukraine when, during Euromaidan, because of the absence of a left alternative the genuine concerns of ordinary people were exploited by the bourgeois opposition and far right.

As expected the Western powers have been quick to publicly criticize the election result. Just months ago, of course, the EU was turning a blind eye to Lukashenko’s authoritarianism as they tried to win him away from Russia. Now, European Commission President Ursula von der Leyen simply calls on Minsk “to ensure that the votes are counted and published accurately”. This ignores, of course, that the whole election process was rigged from the beginning and cannot be otherwise in an undemocratic authoritarian state.

Authoritarian leaders of other countries such as China and Kazakhstan have been quick to congratulate Lukashenko. And of course greetings were quickly sent from Russia. However, Russia’s response appears to be more nuanced. The last thing Russia wants is a repeat on its doorstep of the Ukrainian Euromaidan, when the pro-Russian President in Kyiv was overthrown in favor of a pro-EU government.

The Kremlin’s message to Lukashenko looked forward to cooperation within the “Union state” — a continuation of the Union between Russia and Belarus. Lukashenko, since Euromaidan, has followed an increasingly independent course from Russia — that to some degree is reflected by the number of Russian journalists currently detained and by the scandal in the pre-election period around the arrest in Belarus of a group of Russian mercenaries. In Russia’s usually Kremlin loyal parliament voices have also been raised criticizing Lukashenko’s repression. They are giving the distinct impression that support for Lukashenko will only go so far, if he doesn’t agree to come back completely into Russia’s orbit, if necessary the Kremlin will support another candidate — maybe Viktor Babariko, the former banker close to Russia’s Gasprom. To step up pressure a somewhat spurious committee has appeared in one of Belarus’s regions claiming to want to join Russia, in the same way as in Ukraine in 2014.

Sotsialisticheskaya Alternativa in Russia and Ukraine are, of course, in full solidarity with the struggle of Belarusian workers and youth against the dictatorial regime of Lukashenko and have organized protests at the Belarusian embassies in Kyiv and Moscow with the demand for “Lukashenko to go — for democracy for workers and all oppressed”.