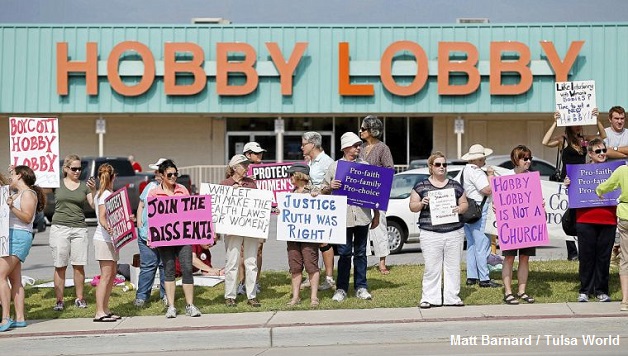 This summer’s Supreme Court rulings captured the outrage of millions as women’s rights took a brutal attack through three devastating rulings. The ‘Buffer Zone’ ruling struck down a Massachusetts law requiring protesters at abortion clinics to stay 35 feet away from the entrance to protect women entering the clinics. The Supreme Court undermined the ability of overwhelmingly female home health care workers employed by the government to gain union representation. But most infamous was the ‘Hobby Lobby’ ruling which gutted the contraceptive mandate under the Affordable Care Act.

The Hobby Lobby ruling allows companies to avoid complying with the requirement to cover all forms of contraception approved by the government without charging workers a co-payment by claiming it violates their religious freedom as employers.

In the United States, 57 million women are covered through employer-sponsored health insurance. The Hobby Lobby ruling is a devastating attack on working class women, and it directly targets low income women who cannot afford reproductive health care without their employer-provided coverage. As Ruth Bader Ginsburg, Associate Justice of the Supreme Court, in her minority statement put it: “It bears note in this regard that the cost of an IUD [intrauterine device] is nearly equivalent to a month’s full-time pay for workers earning the minimum wage.” Women of color will be most impacted by the Hobby Lobby ruling, because with lower incomes and wealth on average, they are less likely to be able to afford to pay for their contraception out of pocket.

In the days following the ruling, Democrats called on women to not forget the role of Republican politicians in attacking women’s rights in the upcoming midterm elections, which have typically very low turnout. Women were decisive in Obama’s election victories which were both against Republican candidates who made pathetic attempts to win the “women’s vote” amidst a continuous war on women’s rights driven by their own party.

But throwing our weight behind the Democrats is a false start to fighting the ongoing attack on women’s rights. While Democrats have generally spoken out against the Hobby Lobby and Buffer Zone rulings, some quite forcefully, their party’s defensive strategy has allowed Republicans to define and dominate the debate on women’s rights for decades. For women to protect past gains or make new ones, a defensive approach is not enough! As history demonstrates, it is through mass struggle, organized resistance and political independence that working-class women have forced politicians to make concessions.

The Supreme Court rulings will increase the level of poverty for working class women, and reinforce the various forms of violence that women face in all aspects of life. The withholding of healthcare assistance will deny the genuine right to choose for many women, and will withhold lifesaving options for women who are otherwise economically dependent on a violent partner. Yet Hobby Lobby is just the most recent attack on the social services that disproportionately serve women.

The ongoing and massive cuts at the federal, state and local levels, which the Democrats have largely supported if not spearheaded, carry devastating consequences for a whole range of programs that provide crucial services for women and people of color.

Even the legacy of the 1976 Hyde Amendment, which banned the use of Medicaid funds for abortions and effectively took away the genuine right to choose for many poor women, can be partially laid at the feet of the Democratic Party. While the Hyde amendment was a Republican initiative, the House of Representatives had a 291 to 144 Democrat majority at its passing! Even worse, the Hyde amendment is still in place – renewed even in the years when Democrats had full control. In 2010 Obama used an executive order to include Hyde language into the Stupak–Pitts Amendment to the Affordable Health Care for America Act, as a political maneuver to secure Rep. Stupak’s vote. Even as Republicans have led the charge on the most brutal legislative attacks on women, Democrats have played politics with women’s lives while covering the real anti-women effects of their policies with their rhetoric about women’s rights.

Most recently, Obama willingly included the initial religious exceptions to the Affordable Care Act for women whose employers are religious hospitals, colleges, and charities which serve huge sections of society. This concession sparked outrage and opened the door for future exemptions like the Hobby Lobby ruling itself. In early 2012 Obama used the tightening of religious exemptions to appease mass anger for overruling the FDA’s decision to give Plan B over-the-counter status. At the time he again echoed right wing arguments, stating that he didn’t want young women picking up Plan B “between the bubble gum and the batteries.”

Mainstream women’s organizations direct the anger of millions into votes for Democrats, who overwhelmingly combine basic talking points for equality alongside a compromising, backsliding approach. This paralyzes the women’s movement from organizing the mass resistance necessary to take on the onslaught from Republican politicians and a section of corporate America.

To move beyond a purely defensive strategy, the women’s movement must be independent from the capitalist system and its political representatives. While Democratic politicians have clearly differentiated themselves on the Hobby Lobby ruling, among other key votes at the federal and local levels, we can’t avoid the reality that the Democratic Party is fueled by big business and will never mount a serious challenge to the oppression of women which remains a pillar of the capitalist system. Their support for massive austerity has hit women, people of color, and immigrants the hardest. The Democratic Party will continue to hold back a bold movement to challenge the corporate domination of politics and deepening inequality.

Successful attacks on women’s rights only invite attacks on other oppressed groups. Days after the Hobby Lobby ruling, the Department of Education granted a religious freedom exemption allowing George Fox University to ban a transgender student from receiving on-campus housing. The reverberations of Hobby Lobby have already emboldened dozens of religious organizations and even a former Obama White House official to request that a similar exemption is allowed for discrimination based on gender orientation on a large scale.

The mass outrage exists to build a women’s movement that truly represents all women, and that stands in solidarity with the struggles of the LGBTQ community, immigrants, and people of color. We must unite in struggle with other movements, as our oppression is so inextricably connected and, for many women, overlapping.

The Supreme Court rulings demonstrate the urgent need for a mass movement with a fighting strategy to capture the anger of millions and organize against inequality. To do this, labor and women’s organizations must break from the Democrats and mobilize independently to fight for women’s rights — including the ones we’ve just lost.