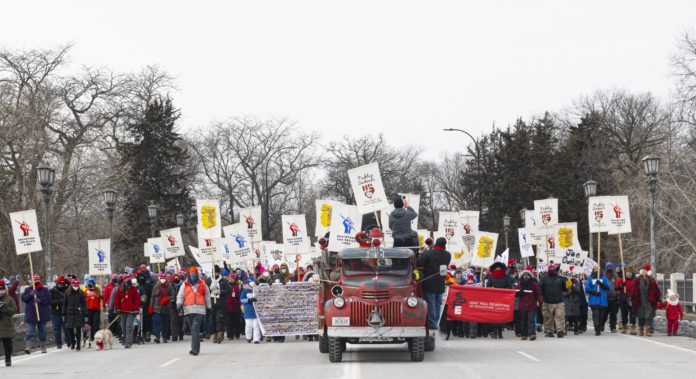 Last week, over 96% of the total membership of Minneapolis Federation of Teachers (MFT) Local 59 voted to go on strike for the first time in over 50 years. The union represents over 4,000 workers, both licensed teachers and educational support staff, in 70 schools across the city. Union activists are reporting that morale is at an all time high, with unprecedented interest in the union among their co-workers, with reports across the district of educators signing up for the union in order to vote “yes” to strike!

At the same time, members of the Saint Paul Federation of Teachers (SPFE) were also taking a strike vote. While a strong majority still voted to go on strike, the “yes” vote was lower than in Minneapolis, with 75% total turnout and 75% support for going on strike. To have educators in the two largest school districts in Minnesota willing to go on strike sends a powerful message, and it’s excellent that school food service workers organized with SEIU 284 are taking their own strike vote next week, but we need unity around action! If need be Minneapolis should take the initiative on their own while they have the momentum.

This strong vote from workers in the Twin Cities is a real mandate to use the power of a strike to win concrete demands on wages, mental health supports, class size, and workplace equity for teachers of color. However the joint statement issued by the executive boards of both unions emphasized “strike action as a last resort”, and continued that they “still believe that tentative agreements can be reached in the coming scheduled mediation sessions” during the legally-required 10-day period between when a strike is announced and when workers walk off the job.

There are two scenarios where an agreement could be reached at this stage. The least likely scenario, without strike action, includes the district administrators surrendering and giving into all the key demands of the educators. The other scenario would be where the union leadership backs away from its initial demands – either because they’re worried they can’t win or because they want to look “reasonable” in the negotiations.

Proposing a watered-down deal early, before mobilizing educators who were overwhelmingly motivated to strike for clear demands, would cast doubt over the union’s strength to deliver the classroom conditions that educators and students deserve. It would sap the educators’ momentum, and potentially pave the way for the most demoralizing type of defeat – the one in which educators aren’t even allowed to fight for what they need.

The combination of school closures and bipartisan cuts to COVID relief have been a disaster for working class parents, especially women. There is historic support for unions, raising the minimum wage, taxing the rich, and workers rights generally, but it’s essential that MFT does everything it can to win the strike as quickly as possible. Taking a “one day longer, one day stronger” strategy doesn’t work, and runs the risk of eroding the enthusiasm of educators in the middle of the Minnesota winter.

Two weeks ago, both unions took steps in this direction, organizing a joint Minneapolis / St Paul rally, which culminated in a march that took a bridge over the Mississippi river. Events like this are important because they give educators, who may be participating in a protest for the first time, the confidence that they will need to shut down “business as usual” to win.

Every building will need strong picket lines of educators, supplemented by a consistent mobilization of parents, students, and community supporters. Pickets should start early in the morning to prevent attempts to keep the schools open. In Chicago, admins kept “limited programming” open in the schools, undermining the strength of the strike.

MFT 59 already has a strong basis to build community support for the strike. The union has been on the front lines of the fight to win a strong rent control policy in Minneapolis, advocated for real police reform, and supported the fight for a $15/hr minimum wage, plus much more. These campaigns are confronting the same political establishment that is trying to break the strike, and keep educators underpaid and schools underfunded

In addition, winning quickly means taking the fight directly to the superintendent, school board members, and Mayor Frey. It’s excellent that the union is discussing an offensive strategy of daily protests. This will require door knocking in working class neighborhoods with invitations for families to participate in the actions, and covering the city in posters that explain the strike and have information about the mass actions. Socialist Alternative is ready to do everything we can to help with this effort and we hope other organizations like the Democratic Socialists of America will join us.

MFT is organizing a mass canvassing event this Saturday February 26, where educators will meet up at their buildings before going out to canvass working class neighborhoods to explain what the strike is all about. In addition, there will be a community BBQ where the wider community can learn more. Actions like this are needed to win essential support from students and parents, including mass protests scheduled when working class people can participate to mobilize this support into a force to win.

In addition, other unions could prepare serious mobilizations of their memberships under the slogan “an injury to one is an injury to all.” Already, Amalgamated Transit Workers Local 1005 and the National Association of Letter Carriers Branch 9 have passed resolutions to mobilize their memberships in solidarity, and ATU 1005 has offered $5,000 to the MFT strike funds. These proposals were initiated by members of Socialist Alternative and should be taken up by other unions as quickly as possible.

Students can also play an essential role in supporting their educators and fighting for better schools. A few weeks ago, thousands of students walked out of schools to protest the Minneapolis Police Department execution of Amir Locke. Coordinated student walkouts the day before the strike would be a powerful show of solidarity and also take away the administrators’ ability to shed crocodile tears over the wellbeing of students as the strike goes on.

It’s also excellent that MFT has dramatically expanded its structures to allow for wider participation in the strike. Every school has a strike captain, a contract action team member, and shop steward, and they are all meeting together regularly to discuss next steps. From here, it’s essential that the bargaining process is open and transparent, so this wide base of educator activists can communicate with the wider membership in daily huddles at every school.

It’s essential that the membership be allowed to fully discuss any tentative agreement with the district before the picket lines and protests are called off so that the momentum is not lost at the most important moment of the struggle. In Chicago, over 40% of the CTU membership voted down the watered-down TA even after CTU leaders sent educators back to work in the buildings. This has resulted in widespread confusion, demoralization and conservative sections of the union gaining ground.

Who’s responsible for the strike?

The corporate media will try to blame educators for the strike, but let’s be clear about who is responsible for educators walking out: it’s stingy politicians and greedy administrators who refuse to pay for the schools the working class, immigrant, and Black communities need. Minnesota’s counselor-to-student ratio of 1:659 is a structural failure, especially in a state with a $7 billion budget surplus, massive corporations like Target, and Wall Street banks like US Bank. We need permanent taxes on the super rich to fund our public school system!

As well, it’s excellent that the union is fighting unapologetically for a pay raise in a world where billionaires are launching themselves into space for fun, and greedy corporations are raising prices on basic goods. Nearly 650 teachers, including 120 teachers of color, have left the district over the past year and a half. When adjusted for inflation, Minneapolis teachers have taken a 20% pay cut over the last few decades. Educational Service Professionals (ESPs), who are in the same union but have a separate contract and who are disproportionately educators of color, only make $24,000 per year – about a tenth of Superintendent Ed Graff’s annual salary.

In this struggle, educators and students are taking on Democratic Party politicians, who have presided over school privatizations; criminal underfunding of public schools; cuts to school support staff; enrichment programs like art and music; and attacks against educators themselves. Additionally, the main barrier to passing Medicare for All is resistance within the Democratic Party, leading to the outrageous situation where ESP’s pay the same amount into healthcare as principals who make six figures. Rising rents, rolling back COVID protections, and a lack of affordable housing are the legacy of the Democratic Party in Minneapolis, and the main contributor to the fact one in twenty MPS students are experiencing homelessness.

A strong strike mobilization, and ultimately a successful strike, could dramatically shift what working class people see as possible in the fight to take on the political establishment. To win any of the educators’ demands, the structures built through a successful strike could become places to debate how to win a program for Medicare for All, rent control and affordable housing, end racist policing, and more. Through this experience, unionized educators could form the backbone of launching politically independent initiatives and candidates, even make significant steps toward creating a democratically organized new party for the working class, without corporate donors and ties to big developers.

Even as the arbitration period continues, MFT Local 59 needs to set a clear date for the strike to begin, and put real resources into organizing a big rally on the first evening of the strike. There also needs to be daily communication and discussion to make sure members are engaged in the process, and motivated to maintain picket lines in the icy Minnesota winter. Fellow union members should pass resolutions along the lines of ATU 1005 and NALC, and donate to the strike fund. Student activists should explore organizing a walkout the day before the strike, which again points to the importance of setting a date. These things will leave little doubt about which side is “reasonable” in this situation, and lay the basis for the wider fightback that is necessary to win the schools working people need (and deserve).