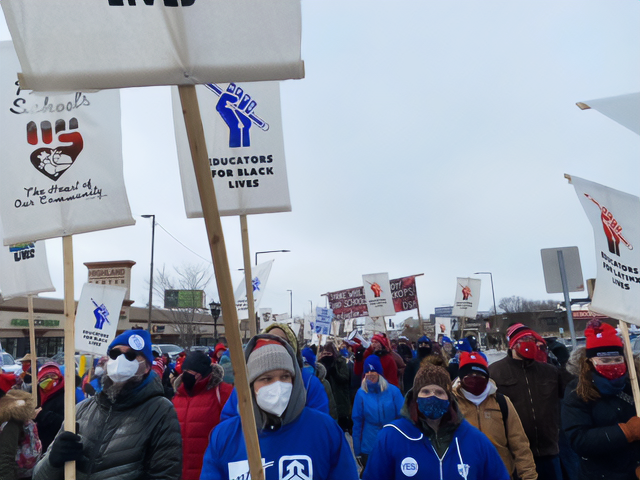 More than 9,000 educators in the Twin Cities may go on strike at the beginning of March. On February 12th, thousands rallied in subzero temperatures, demanding higher wages and mental health support for students and families entering into the third year of COVID-19 pandemic. Below is the text to a leaflet Socialist Alternative Minnesota used in discussion at the rally. We will continue to build support for the strongest possible ‘yes’ vote over the next week, and organize to unite parents, educators, and students to build the strongest community solidarity should the educators strike.

How do we win the strike? All Out for Higher Wages, Mental Health Supports & Safer Schools!

Enough is enough! Educators deserve a living wage. Parents and students deserve well-staffed and therefore well-funded, safe schools. We support educators demanding their rights as workers who are always on the frontline of social crises.

Last fall, hundreds of thousands of workers went on strike, and “Striketober” and “Strikesgiving” have continued. Across the country, working people are standing up to big corporations, such as Amazon, Starbucks, Kelloggs, John Deere. A victory for Twin Cities educators can set the standard for how we fight and win across the country!

Teachers have taken deep pay cuts over the past two decades while anti-union billionaires like Elon Musk and Jeff Bezos are taking vanity trips to space! And we should be honest: both Democrats and Republicans have pushed for schools to reopen without passing any further, meaningful support for working class families.

We support educator demands for paid professional time for ESPs, for more mental health support (social workers and counselors at every school), for the recruitment and retention of teachers of color, for smaller class size. Minnesota’s counselor-to-student ratio of 1:659 is a structural failure. Wage increases must be linked with Cost of Living Adjustment, to offset the billionaires profiting off rising inflation.

Hostile media outlets and politicians will ask “who is going to pay for all this?” We need to be clear: Minnesota has a $7 billion budget surplus. Our state is home to massive corporations like Target and US Bank. We need permanent taxes on the super rich to fund the public school system working class people, immigrants and people of color, need.

First and foremost, we back the highest possible strike vote to show the district that we’re united! Fight to make sure every educator votes yes! Daily updates from the bargaining team on negotiations can help guide the struggle, along with marches on the school board and the corporate interests backing statewide attempts to privatize public education and undercut educators.

We must be organized, parents and educators united, because the media will try to blame teachers for the faults of the administration. This is absolutely intended to drown educators – but we can fight back! In this united struggle, we need mass community mobilizations that disrupt “business as usual” to win. For example, frequent rallies to motivate community solidarity, built by the union and broader community organizations.

Fighting for Racial and Economic Justice

The Minneapolis political establishment presides over vast racial inequalities and has no appetite for genuinely combating racism, as evidenced by Amir Locke’s recent murder by the Minneapolis Police Department. Building the labor movement is key to fighting for adequate COVID relief, Medicare for all, truly affordable housing, better workplace conditions, and winning genuine police reform. MFT has been at the forefront in the fight for rent control in Minneapolis, which is a crucial tool to cut across the displacement of working-class people, especially Black, indigenous, and immigrant communities. Joining these movements behind educator’s fight for better schools, along with a militant and quick strike based on rallies and actions to mobilize our united strength, working people can leverage our power for real results! At the heart of our struggle, we must fight with the labor principle: an injury to one is an injury to all!