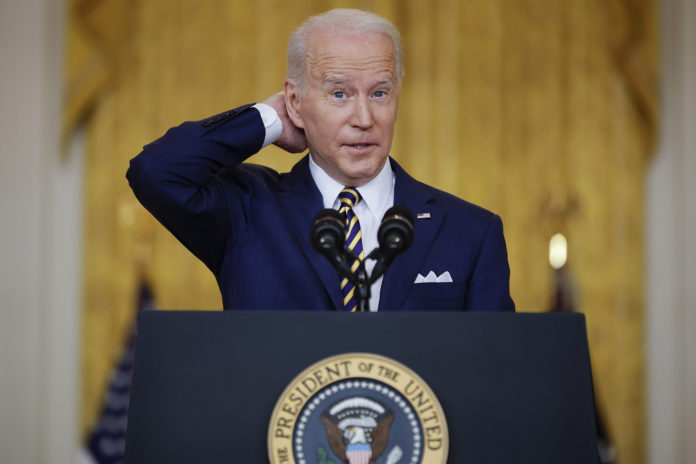 In a press conference marking Biden’s first year in office, a reporter asked, “Inflation is up, your signature domestic legislation is stalled in Congress, and a few hours from now an effort in the Senate to deal with voting reform legislation is going to fail. COVID-19 is still taking the lives of 1,500 Americans every day and the nation’s divisions are just as raw as they were a year ago. Did you overpromise the American public?”

This is a far cry from the mindset of most people in the U.S. Half of Americans report feeling “frustrated” and “disappointed” at Biden’s presidency. If the 2024 election were held today, 60% of Americans wouldn’t vote for Biden. Over a year after casting their ballots in the hopes of steering the country away from the right, millions are staring down the looming threat of a GOP sweep in the midterms.

Biden was elected by voters who had more confidence in him than Trump to adequately handle the pandemic. Yet 2021 saw more COVID cases, more deaths, and less pandemic relief than in 2020. Now, according to Gallup, worry about the pandemic is as high as it’s been since before vaccines rolled out: fifty-eight percent believe it is getting worse. In year three of the pandemic, federal relief is wearing out, which compounded with the pressure of 40-year-high inflation is creating untenable economic stress for working people. In fact, inflation has overtaken COVID-19 as the highest concern for Americans. The rising costs of food and gas are burning a hole in people’s wallets while Biden has refused to take the issue seriously.

One Nevada woman interviewed by CNN summed up the sentiments of many: “I don’t want to say this, but when Donald Trump was here, it was nothing like this.”

Even more maddening than Biden’s failures is his incredulousness at it all. New variants, obstruction in Congress, and inflation – Biden says, who could have seen it coming? Just about everyone paying attention.

The $1.9 trillion American Rescue Plan passed in March 2021 provided crucial relief for working people and families. Millions were able to get vaccinated in early 2021. But by the time of the White House’s “independence from COVID” July 4 barbecue, Biden’s vaccination target came up 7.4 million short. By then, Delta was already on the move, and it didn’t take long for the ‘Biden honeymoon’ to come to a screeching halt.

At the same time, the U.S. refused to seriously take up distribution of quality vaccines globally which, left unaddressed, would only result in more variants. Instead of using the Defense Production Act as he promised to mass-produce tests, Biden declared a war on the unvaccinated. As people vaccinated and unvaccinated alike waited in testing lines for hours and scoured empty shelves for testing kits, White House Press Secretary Jen Psaki ridiculed the idea of sending tests directly to households.

Unemployment, sick leave programs, and the enhanced child tax credit have all run dry, and Biden has backed off from promises to cancel some student debt, instead declaring resuming debt payments a top priority of his administration.

Biden’s signature “Build Back Better” agenda put forward enormously popular social programs to be funded by taxing the rich. Yet in October, only 10 percent of people said they knew the specifics of the plan, which could have included paid parental leave, universal pre-K, free community college, expanded Medicare eligibility, and climate measures. This set Biden up for a hellish reconciliation process in the fall up against Sinema and Manchin, and by November, the vast majority of programs that would have helped working people had been slashed. Now both Biden and the party leadership are talking about shrinking the package even further, and scrapping the name. The goal is to create new legislation that caters to all of the coal baron Manchin’s demands: first and foremost, “no handouts.”

In the midst of an Omicron surge and record low approval ratings, Vice President Kamala Harris told an interviewer, ”It is time for us to do what we have been doing, and that time is every day.” She’s right – in the sense that every day, the Democrats are shooting themselves in the foot. It’s not hard to see where things might go from here. Twenty-six Democrats are retiring from the House. As Dems stumble toward midterm disaster with virtually nothing to show for their big promises, they’ll likely campaign on alarmist proclamations about “existential threats to our democracy.” While it’s absolutely true that democratic rights are under attack in Republican run states, if that’s all they’ve got, it’s going to be a pretty tough sell.

The Trump era showed just how much damage the GOP can do with even an inch of power – they’ll readily use the 51-vote budget threshold to ram through tax cuts for the rich, issue right-wing executive orders, pack the Supreme Court with ultra-conservative nutjobs, and benefit from significantly greater buy-in from across the aisle than the other way around. And since the Democrats took office, the biggest threats to working people have come from right wing state legislatures.

Why Won’t They Declare War on Sinema and Manchin?

We’re meant to believe that conservative Democratic senators Sinema and Manchin’s unstoppable, god-like invincibility is the sole reason we can’t expect any legislative gains from this administration. Most recently, the failure to make headway for crucial voting rights reform set a dismal tone on MLK Day. Because of the 60-vote majority needed to filibuster-proof any non-budget legislation, if the Democrats don’t suspend or change the filibuster – and soon – they’re dead in the water.

We’ve seen the Democrats use iron tight party discipline to crack down on the left. Whatever threats House leadership threw at AOC to cause her to tearfully change her “no” vote to “present” on funding Israel’s Iron Dome could be applied to Sinema and Manchin on the filibuster. The public smearing that boxed the Squad into heaping praise on the Biden administration and aligning themselves with the party leadership could be replicated.

They could also use the authority of the party structures. All those annoying texts and emails from the DNC asking for money could instead be calling for public pressure on Manchin and Sinema to pass the Democrats’ agenda. The multimillion-dollar budgets of the DSCC and the Senate Majority PAC could be doing the same. They have countless tools at their disposal, but they won’t use them. Why? They don’t want to.

Progressives like Bernie Sanders have begun to talk about primary challenges to Sinema and Manchin. But even with those two out of the way, what’s to stop any other member of the caucus from becoming the new “rotating villain”? All it takes is the corporate lobby wooing them, and the Democratic leadership turning the other cheek. Regardless, neither is up for election until 2024, when for all we know we could be under a Republican majority and it would make little difference.

A Bold Left Alternative is the Only Way Out

To say that the Democrats’ track record “opens the door” for right populism to take hold is an understatement – the failures of the Biden administration are a giant, flashing marquee to the right populists and the far right that working people are desperate for change. For the left, it’s either go down with the Democrats’ sinking ship, or step up to provide an alternative. If we aren’t honest about the stark reality of what Democratic leadership has meant for working people, and the futility of “harm reduction” voting, the frustration and disappointment will only inflame the right-wing threat, not fuel the movement for what we truly need.

It could not be any clearer that to reform the Democratic Party would require transforming it at a fundamental level via a bottom-up revolt. Candidates who refuse corporate cash and commit themselves to a fighting approach for working-class demands would need to challenge corporate Democrats at every level, alongside a full overhaul of the undemocratic party structures. If “party reform” would require such a cutthroat battle, why even do this within the Democratic Party, who have inbuilt tools to sabotage left campaigns like Bernie’s and punish their left flank? Building a left party of our own is the only rational way forward.

While Biden’s approval ratings have declined across the board, the frustrations of younger people and independents have been the most pronounced. These are who the left can speak to in putting forward a political alternative. The formation of a broad left party to rescue working people from the failed Democratic strategy and the right wing alike has never been more urgent.