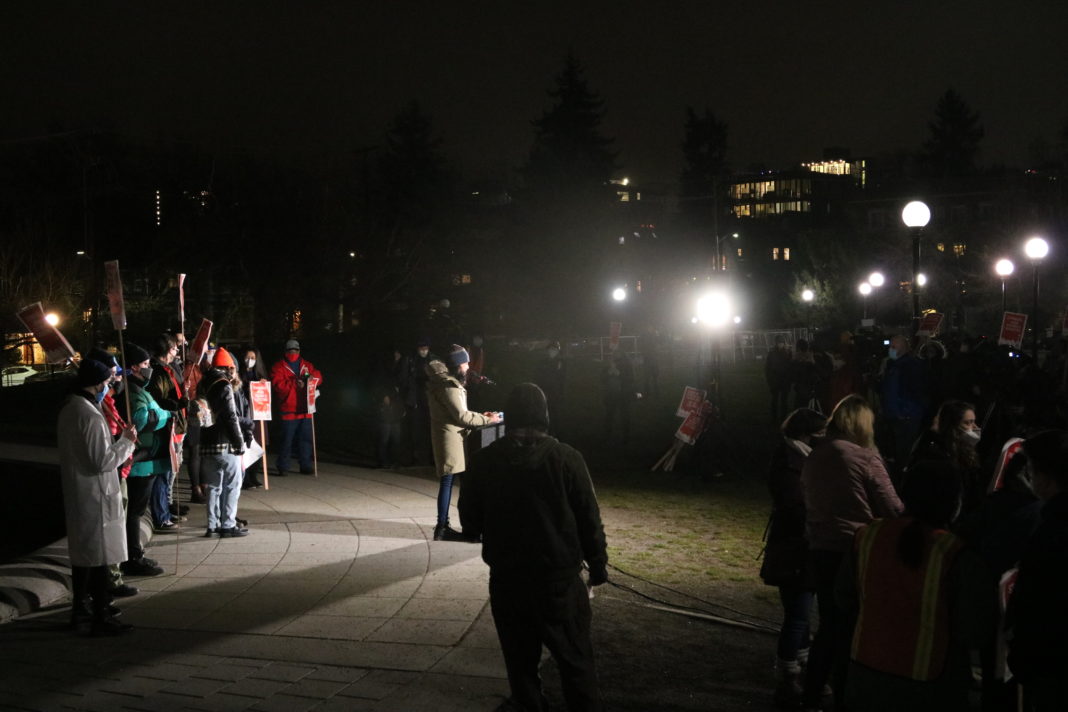 That morning, the workers stood with Seattle City Councilmember Kshama Sawant, who is a member of Socialist Alternative, in front of Starbucks’ headquarters in Seattle, to demand Starbucks stop their union-busting tactics and allow workers to have fair union elections.

Sawant announced at the press conference that she would give $10,000 from her solidarity fund (which comes from taking home only the average workers’ wage out of her City Council paycheck) to the newly-formed Starbucks union to aid the organizing effort.

Sawant represents Seattle’s District 3, which is the home of former Starbucks CEO Howard Schultz, who is estimated by Forbes to be worth more than $4.4 billion – dollars that come directly from the labor of Starbucks workers.

Local unions like PROTEC17, UAW4121, and the Bookworkers Union joined the Starbucks Workers United members that evening for a rally at Cal Anderson park to show their solidarity, along with hundreds of supportive community members.

“We are proud of the Starbucks workers in Seattle and in Eugene, Oregon who have petitioned for recognition. We want to let you know that PROTEC17 members in your communities support your efforts to win union recognition and a good contract,” said PROTEC17 steward Gretchen Waschke. PROTEC17 represents over 9,000 public-sector employees across the Pacific Northwest.

As Sawant took the stage, she noted the incredible precedent set by the Starbucks workers. “Starbucks is a behemoth of a corporation with $29 billion in revenue last year. If workers succeed in building a union, and not only that but winning a fair contract, this will be nothing short of an earthquake,” Sawant said. “It’s crucial we learn the lessons from the history of union organizing. As history shows, and as Starbucks workers are showing now, power at the bargaining table comes from power outside the bargaining table.”

The Starbucks workers are part of a broader surge in union organizing, particularly in the service industry. Workers across 15 cafés in Boston recently won union recognition, and more could be next. In the front of the minds of these workers is the need to win better conditions in their workplaces.

​​“Baristas, counter staff, back of house, front of house, it’s up to us to get organized and fight back on a clear set of demands: a living wage before tips, gender affirming health care, and democratic decision-making on the job, including around COVID safety,” said Sam White, a worker at a newly-unionized independent coffee shop in Boston, and member of their workplace’s Contract Action Team.

With over 9,000 locations in the United States, unionizing even a fraction of Starbucks stores will be a challenge – however, the speed at which new stores are filing for union elections shows that workers are fed up with their current conditions and up for the challenge. With picket signs in hand reading “Rebuild a Fighting Labor Movement – Unionize Starbucks!”, the workers show how their fight is part of something much larger.