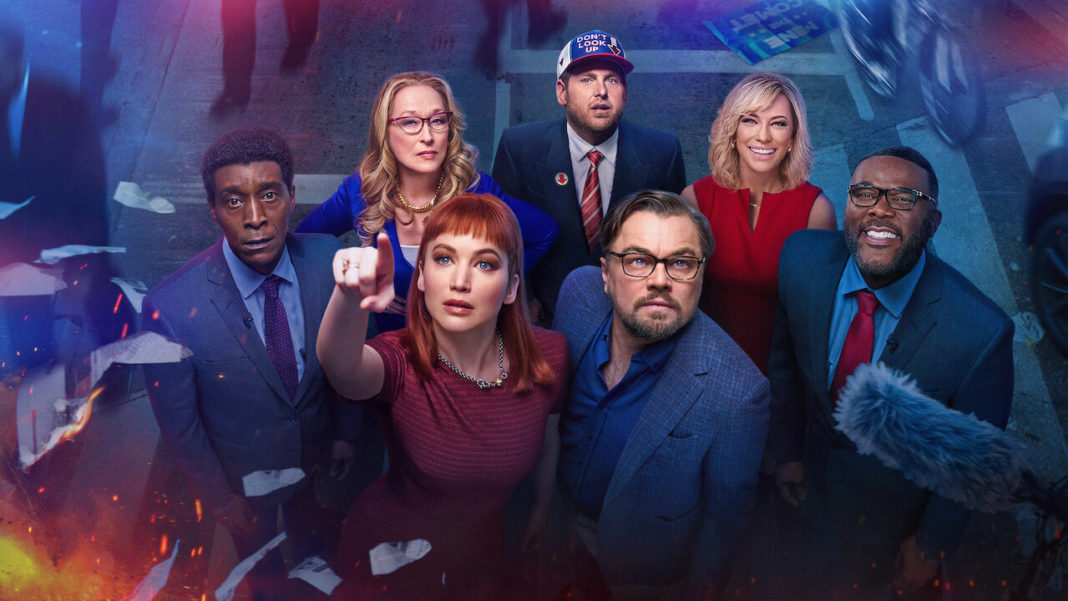 “We really did have everything, didn’t we? When you think about it.”

So ends the 2021 film Don’t Look Up, written by director Adam McKay and journalist David Sirota, senior advisor to Bernie Sanders’s 2020 presidential campaign. Billed as a ‘comedy/disaster’ movie, the film offers a parodical storyline in which two astronomers (played by Leonardo DiCaprio and Jennifer Lawrence) discover that a massive comet is on a collision course with Earth and will cause an extinction-level event unless the course of the comet is altered.

Don’t Look Up is most clearly a satire of the response to climate change, but audiences will also find deep and intentional parallels to the response to the COVID-19 pandemic. However, while people frustrated by the failure to adequately mobilize to mitigate these pressing emergencies may find some catharsis in watching, it will be a cold comfort, as the movie’s main message seems to be that “if the government won’t listen, and the media won’t listen, and the public won’t listen, then we might as well just pray.”

Don’t Look Up takes a pessimistic and even nihilistic approach to satirizing the onslaught of climate change and other manmade disasters rather than offering any kind of solution. If the purpose of this movie is to spur us into action to stop climate disaster, it has failed in this task – and in doing so, it has encouraged the kind of cynical nihilism that poses such an obstacle to the climate movement.

It’s Not A Comedy

“They found a bunch of gold and diamonds and rare sh*t on the comet. So they’re gonna let it hit the planet, to make a bunch of rich people even more disgustingly rich!”

Some audiences may find the blunt heavy-handedness of the movie entertaining or even hilarious at points, but most of the jarring remarks that might read as jokes in another movie leave you instead with a sense of being deeply unsettled.

Don’t Look Up is definitely a parody, but it’s not a comedy – because drawing out the absurdities of life is only funny to a point. Over the last year, many people who perhaps didn’t pay much attention to politics have now seen the disaster that results from such absurdities in real life. For example, only last week the Center for Disease Control (CDC) announced a reduction of quarantine regulations from 10 days to 5 days after exposure to COVID-19, which is flagrantly in the service of big business and corporate profits rather than public health. The idea that the governmental body supposedly responsible for protecting the health of millions of people would obey the wishes of Delta’s CEO over the well-being of every person in the country is, fundamentally, absurd. This farcical decision, connected so deeply to the thousands of people whose lives it will cost, is not funny in the slightest.

This is the kind of stupidity that Don’t Look Up presents to its audience, intentionally. Because the writers have matched up the response of the government, media, corporations, and the public to an accelerated timeline – 6 months until the comet hits Earth – every tragically inadequate response can’t be funny because it’s outweighed by the immediate existential threat the comet poses. Don’t Look Up asks its audience to do the same thing we’ve all been doing in real life for some time now: to stare systemic failure in the face, and not to blink.

The first half of Don’t Look Up follows the two astronomer characters, Dr. Mindy (Leonardo DiCaprio) and PhD candidate Kate Dibiasky (Jennifer Lawrence), as they attempt to convince various people with power to do something to avert the comet.

First, they get an audience with President Orlean (Meryl Streep) and her son, Jason (Jonah Hill), the Chief of Staff. The White House doesn’t take them seriously, and Dr. Mindy and Kate then leak the story to the press, attempting to alert the world through the media, but that doesn’t work either.

Later, after a PR disaster with her Supreme Court candidate, Orlean calls the protagonists back and agrees to a mission to divert the comet – basically to rebuild her public image and win the midterms. (Orlean is coded with references to the Trump administration, but the filmmakers are careful not to identify her with one party, and points out that both parties are on the same side.) However, just when this mission is about to succeed, enter CEO Peter Isherwell, who has discovered valuable materials on the comet and wants his own company to mine the comet for profit. Orlean wastes not a moment in bending to Isherwell, and the White House’s plan is called off in favor of the billionaire’s profit-driven scheme. Isherwell’s plan is not based on peer-reviewed science, and the protagonists break from the White House and eventually begin their own campaign to build public awareness of the comet as Isherwell’s plan fails.

The movie is quick to point out the links between all these groups – politicians, billionaires, and the media, grouping them together as an economic elite. President Orlean is at Isherwell’s beck and call through the film, because Isherwell was a “platinum eagle” level donor to her campaign. The media stars that initially help get the protagonists’ message out come from money and withdraw their help when it’s not convenient for them. The film’s core thesis on the powerful people in society is a common refrain: “it’s all one big club, and you’re not in it.”

To write a movie observing how the protestations of the wealthy are the main obstacle to stopping climate change is, on the whole, positive. However, to only acknowledge the inherent divide between the economic elite and the rest of us isn’t enough. For this movie to provoke useful debate, for it to mean something, it should posit how this conflict can be overcome.

What, then, is the movie’s attitude towards non-elites? The language of Don’t Look Up presents Dr. Mindy and Kate as the “regular people” of the story. We see them struggle with the weight of the existential threat to the planet, be heartbroken by the failure of the system, and eventually come to terms with their own demise. But in reality, the two astronomers represent the scientific community – in essential agreement about the threats of climate change and COVID-19, and frustrated with the nonsensical and suicidal response of the people who have the power to do something about it.

The film’s language actually takes a flagrantly derisive tone towards its real “regular people,” represented by social media (who care more about the love life of Ariana Grande’s character than they do about the comet) and the interstitial cuts of public response to the film’s events, like when Kate accidentally starts a riot by telling people at a bar why the President’s plan to divert the comet was called off.

The movie’s attitude towards regular people is exemplified by a pointed quote from CEO Peter Isherwell to Dr. Mindy: “You think you’re motivated by beliefs, high ethical beliefs. But you just run toward pleasure and away from pain. Like a field mouse.” The filmmakers, like Isherwell and the rest of the elites they lambast, view regular people as mob-mentality animals acting on instinct – instead of the singular group of people with the actual power to change society.

Blink, and you might miss the heroes’ alternate strategy in the back half of Don’t Look Up. Amidst competing campaigns for the public’s attention to the comet (the protagonists’ #JustLookUp versus the White House administration’s #DontLookUp), the main demand from the ‘Just Look Up’ movement is for the U.N. to launch its own rocket to alter the course of the comet.

This pseudo-solution is quickly done away with in the plot of the movie, as an alternate plan to destroy the comet fails, and the protagonists realize there is no time left for a new plan. Instead of taking part in the rest of society’s response to impending doom – rioting, drinking, shooting wildly at the sky – the protagonists turn off the television, refuse to watch the sky, and have a quiet and heartfelt dinner while the world ends.

This, above all, demonstrates the titular pessimism of the movie. “Don’t look up” is not just the film’s title (named not for the protagonists’ campaign, but for the competing denial-focused campaign of the White House), but its central message: when there’s nowhere left to run, nothing left to try, just don’t look up as the world ends.

There’s, of course, one major problem with that: we are far from out of solutions to climate change or the COVID-19 pandemic. In the case of climate change, technology is ready and waiting to convert the entire world to efficient green energy. The obstacle standing in the way is the servants of profit – billionaires and the politicians of both parties who make their living off coal and oil. History has shown over and over that the way to make gains for working people is not to beg for action from these elites, or even to petition international powers to do that job, but to mount a decisive struggle with action in the streets and workplaces.

The “regular people” that the movie is so derisive towards actually hold the lever of economic power that is capable of forcing the government’s hand, and capable even of transforming society to one that does not run on profit but one that is formed around human need and progress.

It’s on this basis that Don’t Look Up falls flat. In expressing the real fear, frustration, and anger that many people are feeling, it falls victim to its own fatalism. What could have been a movie about where the real power in society lies instead becomes a dismal film about the end of the world. Don’t Look Up is, for all its “listen to the science” castigating, part of the problem and not the solution.

The good news is, we know what it takes to win. Student climate walkouts from the last few years are pointing in the right direction, and massive 100,000-strong climate demonstrations at COP26 – a summit which failed on all levels to deliver any plan to avert climate change – are getting closer to what is needed. Time is running out. But what is missing is not more fatalism. We need a unified movement on strong demands like taxing the rich for immediate disaster relief and a wholesale restructuring of the economy around renewable energy and green jobs. For a climate movement that is currently much weaker than it needs to be to win, that is a serious undertaking. But in the words of Don’t Look Up’s Dr. Mindy, “everything is theoretically impossible, until it is done.”