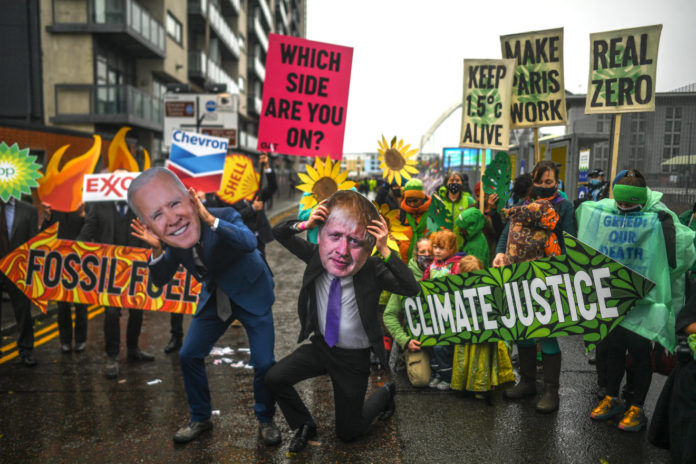 “Unless there are immediate, rapid and large-scale reductions in greenhouse gas emissions, limiting warming close to 1.5ºC or even 2ºC will be beyond reach.”

With unprecedented climate tipping points being surpassed, world leaders at COP26 didn’t just drop the ball – they threw it in an incinerator. Now the climate movement needs to figure out where to go next.

“Crisis COP” Was Doomed from the Start

Since its beginnings in 1995, the UN’s annual climate summits have been a diversion from what’s really needed to address the climate crisis. Prolonged negotiations between recalcitrant nations resulting in meaningless pledges with no enforcement have proven over the past quarter of a century to be completely ineffective in steering the world off its course towards disaster.

The main aim of COP26 was to recommit to the goal set out in the 2015 Paris Accord of limiting warming to 1.5ºC by the end of the century. The pact made in Glasgow leaves the Earth on track to blow past this threshold.

Far from coming together to brainstorm effective solutions to the crisis, it would be more accurate to say world leaders faced off. Petty battles – between rich and poor countries, between rival powers – on behalf of national ruling classes all stood in the way of meaningful steps and sent the conference into overtime as the Friday night deadline was passed. Underhanded maneuvers, like India’s last-minute motion to weaken the language on coal which was supported by China and the U.S., left a sour taste to what had already devolved into a fragile, disappointing result.

These cynical nationalist impulses were sufficient reason, in the eyes of the ruling class, to doom entire species to mass extinction, to raze ecosystems, and to sentence billions of people in every corner of the globe to a grim future of extreme weather and shortages of food, water, and land.

The so-called “last best chance for humanity,” left such a crushing prognosis that conference president Alok Sharma cried from the podium in his closing speech. The most asked of polluting nations was to go home and come to COP27 in Egypt next year with better ideas – literally a pledge to make better pledges.

The regime that really came out on top was the dictatorship of fossil fuels – whose army of over 500 lobbyists seated at the conference outnumbered any country’s delegation. This underlined how the outrageous track record of COP conferences goes beyond the failures of its agreements, but also extends to how it has helped the fossil fuel industry’s bottomless thirst for profits by arming it with tools to greenwash its activities.

Permit trading, carbon credits, and “offsetting,” these are the devices used by BP, Shell, Occidental, and a slew of parasitic polluters, banks, and investment firms to put themselves at the forefront in the “Race to Net Zero.” The PR stunts and corporate commitment to branding themselves as “green” and “climate-aligned” were truly incredible. There is no disputing the fact that they are selling a fiction. For example, November 3 was “Finance Day” at COP26, devoted to the fairy tale that the private sector will save the planet.

No fossil fuel is carbon neutral. No coal mine, oil refinery, or natural gas pipeline is “1.5ºC compatible.” To save the planet, these activities need to be brought to a full stop and replaced with renewable sources. But the last thing the corporations and world leaders will ever acknowledge is the need to stop the problem at its source. This conference was not about “keeping 1.5ºC alive.” It was about keeping capitalism alive.

We haven’t got forever. When Greta Thunberg calls for “No more blah blah blah,” she is speaking to a mood that has broadly set in, that the posturing of the global ruling class at platforms like COP is achieving nothing. But this clarity, while important, doesn’t offer us an alternative to the grim vision of the planet’s future COP left us with, or the strategy to make one a reality.

Today’s climate movement is very different from the environmental movements of the past. The immediacy of the threat and the increasing scale and scope of its impacts have put young people front and center. There were historic days of action across the world in 2019, and the Fridays for Future campaign introduced the idea of strike action. While the 100,000-strong mobilization in Glasgow on November 5 was a powerful indication of the movement’s potential, this and other one-off actions have not had enough of an impact. The crisis is at a new stage, and the movement in turn needs to advance to lead it.

The 2019 momentum created by the international Fridays for Future protests was thrown back by the pandemic. Now, determination to take radical action is re-emerging among young people, but this is happening in varied, experimental ways that reflect a broader sense of disorientation. We need to do something, but what? Voting for Green parties, dismissing political struggle wholesale? Should people go on hunger strike as youth climate activists have in DC, in a desperate and self-sacrificial plea for the Democrats to follow through with their climate commitments? Some in desperation may even turn to futile individual acts of terrorism and sabotage of fossil fuel projects advocated in Andreas Malm’s How to Blow Up a Pipeline?

These ideas circulating reflect a search for an answer, and elements of key conclusions like the untrustworthiness of establishment parties, the need for dramatic action and confrontation, and the need to interrupt profits. But our tactics cannot be successful if they are disconnected from a mass movement strategy that will allow us to mobilize not in the tens or even the hundreds of thousands, but in the millions.

In the coming years, it will be increasingly difficult to find an ordinary person who has not in some way suffered from the climate crisis. Think of how many people in the U.S. have by now survived at least one natural disaster, potentially losing their homes, their loved ones, or being displaced; or have been poisoned from polluted air and water. Each and every one of these people and communities are in dire need of political empowerment, to participate in activism and in class struggle against the capitalists and their climate crisis. The most direct way to accomplish this would be the formation of a new working-class political party and it is the only way to reach the mass scale and coherence to go one stage further, beyond a “youth movement” patronized and belittled by the establishment and toward a truly mass force able to win the ferocious existential battle facing us.

Forget COP, we need our own climate action conferences to harness the full organizing power of mass anger, to debate strategies, and plan escalating tactics. We cannot allow this work to be sabotaged by corporations, their politicians, NGOs, or any force that can hold our movement back from the most effective methods of escalation and the most crucial program of demands. Since corporations will only lie and cheat their way out of accountability, we need to fight to take the polluters into democratic public ownership. Labor unions and the workers’ movement worldwide need to engage in workplace struggle in conjunction with the whole climate movement. The wealth hoarded by the billionaires today needs to be put into mass eco-friendly public transit, housing, and green infrastructure.

These measures are not radical in the context of what science says we need, but capitalism will not abide them. There is absolutely no time to waste in overcoming this system and replacing it with a socialist world that truly operates in the interests of people and planet, not toward its annihilation.