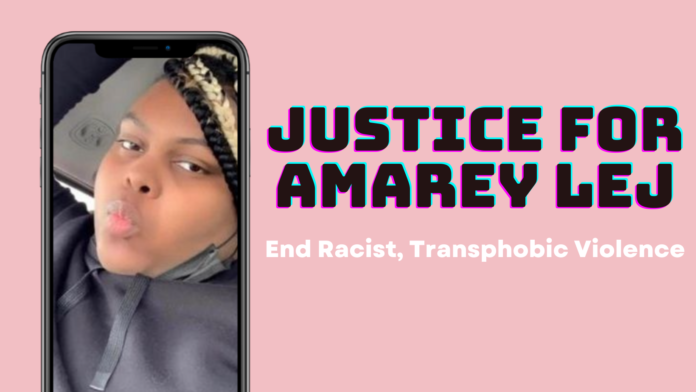 On the very first day of 2022, Amarey Lej, also known as Myara, was found shot to death in a Pittsburgh city street. Her death is the first reported murder of a transgender person in the U.S. in 2022.

It is unknown if Lej was killed because she was a Black trans woman, and we may never know the details of this heartbreaking act of violence. What we do know is that, under capitalism, transgender people of color, even compared to trans people generally, are at greatly increased risk of being the victims of fatal violence. According to the Human Rights Campaign’s 2020 report on violence against the transgender community, 78% of the victims of fatal violence against transgender people since 2013 have been trans women of color, with Black trans women making up 66% of the victims.

The Crimes of Capitalism

On top of bigotry and discrimination putting transgender people of color at increased risk of violence, the deficiencies of the capitalist system compound these risks. Trans people generally make lower wages and are more likely to experience homelessness, and poverty puts people at higher risk of violence as well. To make matters worse, victims of violence often feel unsafe going to the police, especially in over-policed communities that have been bombarded by the racist War On Drugs and gentrification.

2021 marked the deadliest year on record for trans people, a record that is unfortunately reset nearly every year. While this year-by-year increase may be at least partially due to better reporting, it is also linked to the emboldening of the far right in recent years.

Our hearts break for Lej and her loved ones, and the question “how can this be prevented?” is forefront in our minds.

The crises of capitalism, racism, and transphobia are all worsening as we speak. In 2021, over 200 Black people were killed by the police, which puts them at 27% of all police killings in 2021 despite being only 13% of the US population. 2021 is being hailed as the worst year in recent memory for trans people, with 17 anti-queer bills being passed nationwide. This onslaught of oppression is compounded by the worsening of conditions for all working people. Working people of all demographics are falling ill with COVID-19 as the pandemic continues to be mishandled internationally. Working-class people nationwide who test positive are being sent back to work before they are better. On top of that, all this is happening while so many workers are homeless, underpaid or outright jobless, and in communities increasingly devastated by climate catastrophe. Working-class people face down all this and more at the hands of the crisis the capitalist system has produced. Our only way out of it is to fight back together.

An End to Oppressive Violence

Regardless of whether Lej’s death was a premeditated hate crime or simply a crime of opportunity, the trans community and Black community need solidarity from the broader working class now more than ever. The fights against racism, transphobia, homophobia, and violence in our communities will never be won if we try to tackle them separately.

In order to take the first steps towards ending the oppressions that plague the working class, the labor movement should boldly take up the demands of queer and Black people as an important part of a broader program for workers’ rights. Trans workers and workers of color are more likely to find themselves working low-wage, generally unorganized retail and service jobs. Unions can play an outsized role in forging unity and solidarity among working people by taking up bold campaigns to organize the unorganized. The recent wave of strikes and unionization campaigns over the last six months clearly show that workers have a deep desire to fight back against the bosses for better wages, hours, and conditions. In order to do this successfully, unions will need to win the buy-in of everyone. The first step down this path would be taking up demands against oppression more broadly, like trans-inclusive healthcare, with rank and file workers leading the way and explaining the importance of these issues to their coworkers when necessary.

A true end to gender oppression, racism, and violence in our communities cannot be fully realized  under capitalism, a system that requires inequality to maintain itself. The struggle against gender oppression, racism, and anti-social violence needs to be linked up to other struggles of the working class and oppressed, and channeled toward fighting for a socialist restructuring of society. An end to capitalism will not immediately erase centuries of transphobia and racism, but would undoubtedly lay the basis for a society that could fully eradicate gender-and sexuality-based discrimination, and racism.

The fight against all forms of oppression can only be won united as one international working class. In the words of the Marxist revolutionary, Leon Trotsky: “Life is beautiful. Let the future generations cleanse it of all evil, oppression, and violence, and enjoy it to the full.” Amarey Lej deserved a life free of evil, oppression, and violence, and a chance to enjoy it to the full. Together, the workers of the world can secure that for future generations.