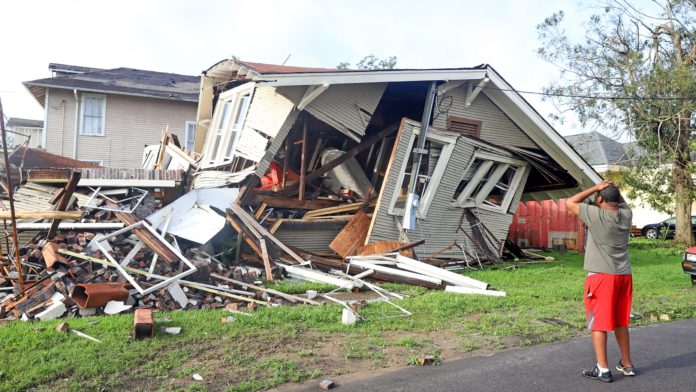 Imagine it’s 90 degrees outside, your wall-to-wall carpet is fully soaked in flood water and it’s starting to mold. Your power is out so you have no air conditioning, not even a fan, and your phone has been dead for days. Everything in your fridge is rotten, but the grocery store doesn’t have power so they’re cash only, but you don’t have any cash. You don’t have a car, so your options are to keep your family inside the house, breathing in spores, or stay outside in flooded streets and unlivable heat.

This is the basic state of existence for millions of people in Louisiana after Hurricane Ida tore through the Gulf Coast. Sadly, the misery and desperation was not contained. 1,300 miles away, 44 people died from the very same storm as it pummeled New York and New Jersey.

A woman named Choi Sledge in Queens, New York told the New York Times that around 9:30pm on the night the storm hit, she got a call from her basement neighbor, 48-year-old Mingma Sherpa. Sherpa told Sledge that water was pouring in through the windows and she had no way out. Then the line went dead. The next day, Sherpa, her husband, and their two-year-old son were found drowned in their apartment.

Ida jumped from a Category 1 to a Category 4 storm in 24 hours as abnormally hot waters in the Gulf of Mexico supercharged the wind speeds and storm surges. The death toll from the storm has climbed as the effects of Ida continue to wreak havoc along the eastern end of the country, with cities experiencing unprecedented flooding and storms. Ida has reached uncharted territory, with catastrophic winds sustaining themselves without water contact across more mileage than ever seen before.

The danger in the immediate regions where the hurricane passed through has not yet passed, either. Carbon monoxide poisoning, flooded roads, and use of power equipment have historically led to a vast number of deaths in the aftermaths of hurricanes like Ida. There is a serious risk of contamination from hazardous chemical plants in a region called “cancer alley,” an industrial strip in Louisiana. Two thirds of the strip were impacted by Ida, ultimately affecting upwards of 590 industrial sites. As a result, there are deep concerns about flooding risking the integrity of these fragile facilities – meltdowns could be catastrophic.

The health impacts that could result from these natural disasters can’t fully be understood at this point. Viral and bacterial infections are spiking as a result to exposure to flood water. In regions affected by wildfires, respiratory disease is growing more rampant. Coupled with spikes in Delta cases, hospital systems simply aren’t prepared for the influx of patients. Those most affected by this are also those that have the least access to healthcare. This points to yet another reason that we must call for Medicare for All – people need health assistance and they need it now. This is not a demand that can be watered down or pushed off, it’s of the absolute necessity.

We can point directly to the climate crisis as the main contributor to the damage that has occurred along the Gulf Coast and up the East Coast. Wetlands that have long served as a sort of barrier for the region during hurricane season no longer exist due to oil spills, water drainage, pollution, unsustainable use, invasive species, disrupted flows from dams, and sediment dumping from deforestation and soil erosion upstream. Extreme hurricanes and tropical storms, as well as extreme heat and droughts, are both a consequence of warming global temperatures and rising sea levels.

These rapidly intensifying hurricanes, with effects like that of Harvey in 2017 and Ida today, are a clear indicator of the climate crisis. Storms like these make calls for residents to evacuate virtually moot, as protocols and plans to do so haven’t been updated in years. The reality is that there is no infrastructure in place to provide safe shelter to people fleeing the path of natural disasters, of any kind. It took less than three days for Tropical Depression Nine in the Caribbean to make landfall in Louisiana as the Category 4 hurricane we now call Ida, traveling with sustained winds of 150 miles per hour. Even with that time, nothing was done or could be done on the scale necessary to avoid the chaos that unfolded.

Storms like Ida are rapidly becoming the norm, causing damages that will only increase as the climate crisis heightens. The Washington Post recently released a statistic that one in three Americans have been affected by a weather disaster in their county in the last three months. Numbers like those are only going to become more horrific as time goes on.

What we are seeing is a direct result of the careless way in which big businesses treat the planet – the same destructive behaviors that caused the Caldor Fires by Lake Tahoe and the unprecedented heat wave that has been sweeping across the nation for months now.

We need immediate action on the climate. The Democrats are negotiating their $3.5 trillion budget reconciliation bill this month which includes certain climate measures, but they’re already paring down their early promises. What started as an increase in the corporate tax rate from 21% to 28% (still well below the 35% rate before Trump’s 2017 tax cuts) is now proposed to be just 26.5%. Unless a sufficient mass movement is built to demand the bill’s passage in full, we can assume some of its more progessive climate provisions will be carved out, like when climate measures were readily dropped from their previous infrastructure package.

Many progressives ran their campaigns around the demand for a Green New Deal. With Democratic control of Congress and the White House, and progressives holding the balance of power in both the House and Senate, they have unique leverage right now to fight for bold climate action. They should call mass demonstrations and organize conferences to bring together youth climate strikers and organized labor. On the basis of a democratic mass movement, the $3.5 trillion infrastructure package and more could be won. Given the recent record of elected progressives, unfortunately, there’s reason to doubt they will use this leverage.

Climate change cannot simply be counteracted by ordinary people committing to recycling and using less water. These issues are at the root caused by capitalist destruction of the planet for short-term profit. Both in the short and long term, fighting the effects of storms like Ida that have been exacerbated by climate change will require a mass movement against economic power, against capitalism.

Youth climate activists, trade unions, workers’ and grassroots organizations need to join in a mighty struggle for a democratically planned economy where polluting sectors are brought into public ownership and retooled on a green basis. This would necessarily include a jobs guarantee and retraining program for any worker in a polluting industry and massive investment in transforming our infrastructure. Fighting for a socialist future is the only way to prevent a future full of devastating climate disasters.

This also includes fighting for a fully developed strategy to mitigate the damage of climate disasters, as well as a Green New Deal NOW. We demand the conversion of public arenas and empty luxury housing into emergency housing for those impacted by disaster, the creation of community and workplace councils to coordinate and distribute aid, immediate cash assistance to those affected funded by taxing the rich and big business, the mass expansion of emergency responder agencies, and mass investment in weatherizing and rebuilding homes. We also demand a COMPLETE halt on any new fossil fuel plants and an IMMEDIATE plan to transition the energy grid to 100% renewable resources.