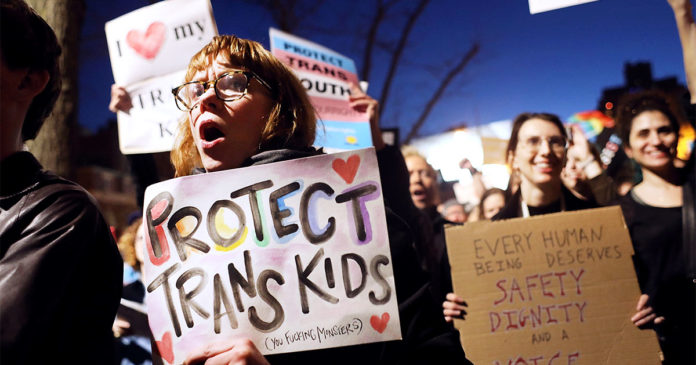 By March 31, International Trans Day of Visibility, the state of Arkansas had introduced four major bills targeting the rights of transgender people, and the 2021 legislative session has shaped up to be the most reactionary and transphobic in recent memory. On April 6, the Arkansas legislature overrode the Governor’s veto to ram through a bill that will strip trans youth of access to gender-affirming healthcare, and an anti-trans bathroom bill was introduced in the House. Despite Trump leaving office, trans people continue to struggle against bigoted violence, economic marginalization, and social exclusion. With Arkansas leading the way, attacks on the rights of trans people continue to escalate across the country.

Governor Asa Hutchinson signed into law a bill that bans trans girls and women from playing sports in schools in accordance with their gender identity in late March. The so-called “Fairness in Women’s Sports Act” insists that students be classified according to the sex on their birth certificate. This law will be enforced in public education from elementary schools up to college level, and private schools that compete against public schools must also conform. While conservatives insist that allowing trans girls and women to compete gives them an unfair advantage, science does not back up this belief. The 2011 NCAA Transgender Handbook quotes Dr. Nick Gorton, who says “Transgender student-athletes fall within the spectrum of physical traits found in athletes of their transitioned gender, allowing them to compete fairly and equitably.”

There is a lot of variety in the physical makeup of trans athletes despite the stereotype that conservatives perpetuate, and there are a number of additional factors that make an athlete successful, including training and technique. It is also significant to note that there have been no studies done to compare the performance of trans athletes before and after their transition. In reality, the purpose and effect of this law will be to prevent trans women from participating in sports, which can be a crucial avenue through which young people build self confidence, friendships, and manage stress. These laws, 52 of which are moving through legislatures in 28 states, will further alienate trans women and girls, and further exacerbate legal discrimination against trans and gender non-conforming people.

The “Fairness in Women’s Sports Act” is far from the only legislation that specifically targets the trans community in general and trans youth in particular. HB1749, a bill that could force public school employees to use only the name and sex designated on the student’s birth certificate, is making its way through the state legislature. Again, this bill targets trans and gender non-conforming youth, and if passed, will end up exacerbating discrimination and mental health issues due to misgendering and deadnaming. Risk of suicidal behaviors increases for trans youth who are not correctly named and gendered in schools, at home, and with friends.  Even without this bill, many trans and gender non-conforming kids do not receive the kind of supportive environment they need to thrive, and HB1749 would further invalidate them.

Another bill, HB1570, the “Arkansas Save Adolescents from Experimentation (SAFE) Act,” will deny gender-affirming treatment for any trans person under 18. Even though Governor Asa Hutchinson vetoed the bill early this week, the legislature overrode his veto, green lighting the most flagrant attack on trans rights in recent memory. The act will prevent public funds from being granted to organizations that provide gender-affirming procedures to minors. It will forbid public facilities from providing transition-related healthcare and will not allow Medicaid to provide coverage for this type of care to trans youth. Doctors who provide gender-affirming care to minors will be subject to losing their licenses. Additionally, this act will give insurance companies the option to refuse coverage of trans-inclusive healthcare to adults. HB1570 illustrates how the attacks on the trans community strip people of basic rights, using the rhetoric that transitioning to another gender is not valid but just an experiment or a mistake. Far from protecting young people, this bill puts trans youth in danger. Studies have shown that providing puberty blockers to trans teens lowers risk of suicidal ideation and other mental health problems.

HB1570 is not the only trans-exclusive healthcare bill passed in the current legislative session.  Governor Hutchinson recently signed SB289, which is also known as the “Medical Ethics and Diversity Act.” Under the guise of religious freedom, this law allows healthcare providers to refuse care based on religious, moral, or ethical objections – even when a medical procedure is necessary. Because this law allows medical care providers effectively to discriminate based on personal belief, trans patients – as well as the rest of the LGBTQ+ community – could find it more difficult to find sufficient healthcare in Arkansas. Coupled with the SAFE act, this law strips away healthcare access for trans people of all ages.

More recently, the House introduced HB 1882, “Arkansas Privacy Accommodations Act.” If passed, this bill will enable litigation against government public agencies if accommodations are not made for individuals who do not want to use the same restrooms as people who are trans or gender non-conforming. This bill applies not only to restrooms but also to sleeping quarters, locker rooms, and shower rooms. On a practical level, this bill will be difficult to enforce. However, should the government try to enforce it by checking birth certificates or other government-issued identification, it will end up invading the privacy of trans and gender non-conforming people, making them feel more unsafe. According to GLAAD’s 2017 report “Debunking the Bathroom Myth,” “multiple studies show that transgender people often report experiencing denial of access to facilities, verbal harassment, and physical assault when attempting to use public restrooms.” More importantly, however, the focus on trans stereotypes and bathrooms distracts from the harsh reality that transgender people face in their daily lives. For example, they experience job discrimination as well as higher rates of poverty and homelessness because of who they are.

The state legislature is not solely to blame for these attacks on trans rights. These anti-trans bills could not have progressed this far without the help of big business. Corporations like Walmart, which boasts a pro-LGBTQ+ image, have donated to numerous sponsors of the anti-trans bills through their PACs. Despite being awarded a perfect score of 100 on the Human Right Campaign’s 2021 Corporate Equality Index, Walmart donated $160,000 to the sponsors of HB1570 and SB354 throughout their political careers. Other prominent corporations have used their PACs to give tens of thousands of dollars to the campaigns of the anti-trans bill sponsors. For example, AT&T has donated $74,000, and ExxonMobil has given $71,000.

The rollback on trans rights is not limited to Arkansas, and a number of other states are a part of this trend. For instance, Tennessee Governor Bill Lee and Mississippi Governor Tate Reeves have already signed anti-trans sports bills similar to the one in Arkansas in their respective states. Aside from Arkansas, a number of other states want to ban gender-affirming healthcare to minors. Among them are South Carolina, Texas, and Alabama. The Texas bill would classify the act of providing youth with gender-affirming treatments or surgery as child abuse. The Alabama bill attacks trans-inclusive healthcare for youth by classifying it as a felony.

Despite these significant rollbacks to trans rights, Arkansans are already starting to fight back.  Teachers have started a petition to push back against HB1749, and Arkansans have begun to organize protests against these anti-trans laws and bills. In order to put enough pressure on the state government, however, the people of Arkansas need to build a sustained, broad, multi-racial, multi-gender working class movement with bold demands that go beyond the mere repeal of these laws.  Even before this legislative section, the trans community was suffering enormous oppression from employment discrimination, housing discrimination and homelessness, transphobic violence, and inadequate healthcare.