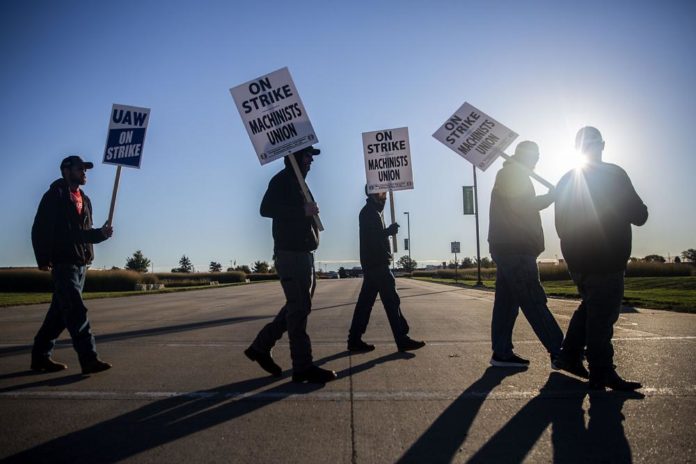 During forty years of neoliberal attacks on pay and working conditions, workers have fought to maintain decent living standards for themselves and their families by sacrificing their free time – either by working multiple jobs, or by putting in endless hours of overtime. Young people have gone to work while still in school, and both parents working full time has become normalized. This has put an increasing strain on working class life. The bosses’ ruthless response to the pandemic, laying some workers off into enforced idleness while others, labeled “essential workers” were stretched further than any workforce in living memory, has brought things to a head and this was fully reflected in the John Deere workers’ revolt.

With a fighting leadership, much more could have been won.

Workers at John Deere plants voted four times in the past two months. In September, faced with the company’s demands that despite record profits, workers already stretched to the limit should work longer hours for less pay and worse benefits, they voted 99% to authorize a strike. In October, their union leadership recommended a contract that would still have provided pay raises below the level of inflation – a slow-moving pay cut. Outrageously, this contract offer included a plan to cut pensions and benefits for new hires, creating a third tier in a workforce that has been divided ever since the union agreed to a two-tier pay and benefits structure in 1997. In a series of stormy meetings workers voted this offer down by 90% and proceeded to go out on strike.

Two weeks later, union leaders came back with a significantly improved offer, doubling first year pay raises, improving pensions and healthcare and most importantly, taking the third tier threat completely off the table. This was rejected again, although by a much smaller margin. A majority of the workers, knowing the strength of their position with a nationwide labor shortage and buoyed by unprecedented levels of community support, saw their chance to regain all of the concessions given up under the neoliberal assault and recover the same pay and benefits enjoyed by pre-97 hires. The entire impetus for this fightback came from the rank and file, as their union, the UAW, is in crisis with 15 leading officials including two previous presidents having been convicted of corruption over the past two years and more on the way. The union officials have consistently failed to show anything resembling a fighting lead.

This lack of leadership is also the reason why on November 17, workers voted by 61% to 39% to accept a TA which is only slightly different from the one that was rejected in mid October. Interviews with striking workers showed that a majority of members, faced with the prospect of an indefinite strike going into the winter months, understood that their national leadership was not going to fight for the transformational changes that are needed. The role of the leadership over the past several decades has weakened shop-floor organization and no organized opposition has yet emerged which is strong enough to challenge this and rediscover the UAW’s fighting traditions.

But this strike has proven that workers’ expectations have leapt far above the heads of their leadership. Defensive strikes had become the norm for the labor movement over the last several decades. Instances that went further, under guidance of leadership, often set their sights for “what is possible.” But as with the wildcat carpenters strike in Washington, UAW’s rank-and-file struck a new tone for the labor movement by refusing to keep their demands to what the bosses were willing to offer.

The strike won significant gains compared to what the company and UAW leadership offered and in that sense it has been rightly greeted as a win. But it cannot be seen as a complete victory.

“One day longer” is not a strategy to win.

These gains were won in spite of a profound lack of any plan to win beyond striking for “one day longer”  and crucially, a complete lack of demands that would have expressed exactly what goals workers were fighting for and be used for mobilizing mass support. Any rational organization sets targets and goals by which to measure its successes and remedy shortcomings but the UAW did not do this.

This complicated balance sheet will leave lasting imprints on the labor movement. On the one hand we see the power of the strike to push the bosses to make concessions. After decades of labor’s decline under the heel of neoliberalism and many bitter defeats, it is important this positive lesson is highlighted. On the other hand, workers’ aspirations far exceeded what was won, so for many this only reaffirmed their distrust in union leadership and for some, the whole concept of unions and class struggle as a vehicle for winning change. It is critical that workers grapple with this strike’s many lessons if we are to build a labor movement capable of winning desperately needed change.

In the “Post 97” Facebook groups–named after the ‘97 contract, a historic betrayal that introduced two tier pensions among other concessions–workers discussed the need for major changes. A more militant layer set their sights on returning to the equivalent of a pre-97 contract. For many the strike was a fight for a return to the 8 hour day, weekends, pensions, healthcare and family supporting wages. In short, they were demanding their lives back. This echoes the demands of workers from the earliest days of the factory system.

Grating against workers’ growing sense of self-worth and power is capitalism’s unquenchable thirst for profit. Under the guidance of John Deere’s CEO, John May, the company has increasingly followed the Amazon model, or perhaps really the Ford model; encroaching into workers’ lives in dystopian ways. Under the hated CIPP incentive plan, workers are timed on how long it takes to make products at full speed so the company can set new, higher standards, ensuring an endless speed-up. Recently, a worker at the East Moline “Harvester” plant described how supervisors were timing how long it takes to walk to and from the bathroom and how much time they spend in it. This authoritarian behavior extends into workers’ lives as they are no longer allowed to control their weekend schedules because of mandatory overtime and the abusive practice of unpaid on-call status for weekends, “just in case” the company should need them.

Workers want their lives back!

Overtime is one of many ways companies have forced workers to shoulder cost of living increases. This has left many John Deere workers with health complications from long-term wear-and-tear, one of many reasons the guarantee of healthcare in retirement should not even be up for negotiation. This is why Medicare for All should be a central demand for the labor movement. At the same time company executives and shareholders are drawing hundreds of times their workers’ wages.

As the third TA vote neared, workers repeatedly reminded each other of the 10-12 hour shifts and breakneck speeds they would be returning to in order to meet demand. After a year of record profits, and another such on the horizon, this is a spotlight on the glaring inadequacies of the offer.

Likely to the dismay of union leadership, the sellout of previous generations–which allowed the bosses to claw back these gains–was not forgotten. In fact, the bitterness of those betrayals and years of stagnating wages has only served as fuel for worker militancy. Workers have rejected neoliberalism to such a degree that anyone still arguing for austerity is automatically discredited. But it is not enough to reject failed ideas or leadership.

The UAW leadership dragged its feet every step of the way in this strike. From the very beginning of negotiations, workers were kept in the dark. On the other hand, unorganized Facebook discussions about expectations were important but not enough to forge a united consciousness around a clear set of demands.

Strike guidelines were intent on keeping the strike within narrow bounds. While many were obvious but important reminders about safety, they also included explicit instructions to allow strikebreakers in and out of the plant without interference. There were no attempts by leadership to expand pickets using community support or appeals to salaried workers to stand in solidarity with the strike. The union’s resistance to arbitrary injunctions by local courts to ban effective picketing were limited to legal briefs in the courtroom. This is despite the fact that the strike had massive community support throughout. In fact, the few attempts at broadening the struggle by the rank-and-file were admonished by leadership.

This was replaced with calls for “sticking together” and striking “one-day-longer.” With no plan for escalation or common list of demands, the pitiful $275 per week strike stipend sent the message loud and clear to membership: “we are unwilling to fight.” However neither UAW leadership, nor John Deere’s shareholders were convinced this would be enough to end the strike in November. Twice bit by membership over weak TAs, UAW International did not even recommend a ‘yes’ vote on the third. And only after it passed did shareholders finally catch their breath when, as Bloomberg announced, “Deere shares rose as much as 3.5%… [and] outperformed the broader market.”

In the ongoing discussions throughout the strike with rank-and-file workers, Socialist Alternative found an openness to criticize leadership and willingness to fight for far-reaching demands. We believe that, until the very end, even a significant section of “yes” voters could have been won over to a militant approach. The missing ingredient was an alternative to existing leadership in the form of rank-and-file organization. With a clear program of demands, strategy and tactics, a rank-and-file caucus could have been a lightning rod for the fighting layers of the union.

To get a fighting, democratic union, rank and file must organize

If workers are going to have a chance to undo the concessions of the past 40 years and win real gains, business unionism will need to be replaced with class struggle unionism. The development of rank-and-file opposition caucuses is the vital next  step to this transformation. These caucuses need to be built around a program to democratize the unions, with officers paid only the average wage of workers they represent; a fighting set of economic and social demands; and the call for a mass unionization drive. The real momentum to win big victories will come when we bring millions more into the unions as in the 1930s. The partial victory won by workers at John Deere through sheer determination shows the enormous potential and also the real obstacles facing organized workers in the fight for a better life.