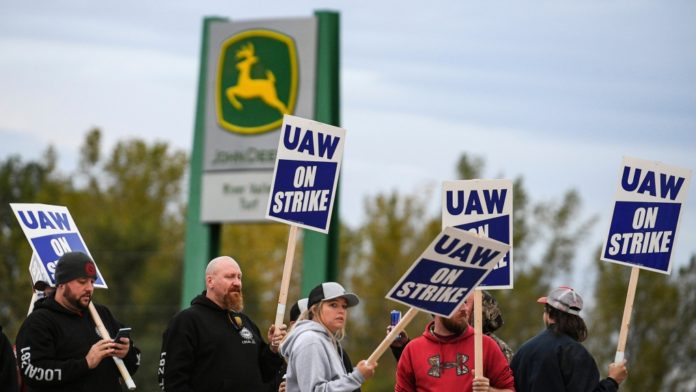 “Pension and post-retirement healthcare are still a must. We will never have the scales tilted in our favor like this again.”

“They left in contract language that cuts our pay every year. That allows them to effectively “steal” money from our pockets when the mood hits them, and that allows us no recourse.”

“They did not address overtime issues – that don’t allow us to plan time with our families. It’s not just about money. It’s about being treated like human beings in our workplace. To be able to say to your boss, ‘I can’t work this weekend, my wife has to work and I need to be home with our children,’ without being threatened.”

These are all statements by John Deere workers about why they rejected the company’s second tentative agreement, which John Deere now claims was their “last, best and final offer.”

The following leaflet was produced by Socialist Alternative to offer our support and ideas on how to prove them wrong! Find us at SocialistAlternative.org or email us locally at [email protected]

The strike won real gains, but the fight must continue.

The gains in the second tentative agreement show that striking works. A few examples include doubling the offered wage increase, nixing the proposed third tier pension, improving healthcare benefits and returning to thirty days’ probation. But it’s not enough.

Employees were considered “essential” during the pandemic and pushed to work 12 hour days. Every year the CIPP* incentive program was already causing increased stress on body and mind – just so that Deere shareholders and executives can rake in record profits, like how the John Deere CEO, John May, made 160% more in 2020 alone.

Workers are fed up with working weeks without a day off for bosses who treat them like disposable hardware. This is why a record number of workers all over the country are quitting their jobs and why strikes are breaking out at workplaces like Nabisco and Kellogg’s food plants. Workers will no longer accept crumbs while they work their bodies to the bone.

In too many unions, leadership refuses to communicate negotiations with workers. Most union members are not even being told what is going on in bargaining behind closed doors. There should be meetings between members of the bargaining team and rank-and-file workers that happen regularly on the picket lines throughout the week to help ensure that the demands link the pickets to the bargaining table

John Deere has threatened to use a scab workforce and facilities abroad to undercut the strike. The bosses need to get the message that these threats are not taken lightly by the union. Workers have to find ways to block shipments and scabs from entering and exiting the facilities, because strikes are most effective when they fully shut down production. “One day longer” is not a strategy to win. Months without pay will wear union members down while management and shareholders sit back and live off the fat built up for them by workers. The massive outpouring of community support shows that there’s room to escalate the struggle with mass protests, rallies and solidarity actions that engage everyone in the community.

At the Nabisco plant in Portland, Oregon, community members stepped up to do things that the union was told not to do by court injunctions. The informational pickets previously called for outside of scab shipping companies and this Monday’s protest outside of Deere Headquarters are important steps in the right direction. Socialist Alternative believes this should be expanded to regular, coordinated community pickets that can significantly strengthen the strike. Such pickets could even be held outside of Deere’s network of storage facilities that are not under contract.

Socialist Alternative has been in contact with workers from Waterloo, Dubuque and the Quad Cities. Through these discussions these demands have come to the forefront.

Workers have never been in a stronger position than in today’s labor shortage. This is the time to fight and win big!

If you want to help us fight for these demands, contact us at [email protected].