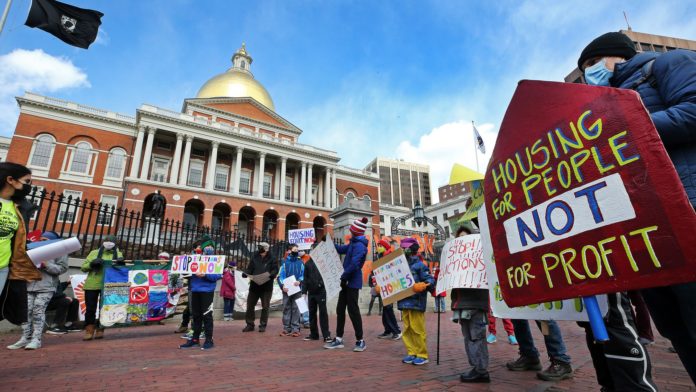 “I just feel like I’m drowning,” a New York City renter told us as the clock ran out on the federal eviction moratorium. “I owe my landlord thousands of dollars and if I don’t come up with it in the next two months, I have to pack up my entire apartment and find a friend who’ll let me sleep on their couch. It feels like blackmail or something.”

With 6.5 million American families behind on rent payments and 3.5 million individuals at immediate risk of eviction, Biden and the Democratic leadership allowed the federal eviction moratorium to expire on July 31.

Biden lamented that his hands were tied and only Congress had the authority to act to protect renters. As he did when he blamed the “Senate Parliamentarian” for blocking the $15/hour minimum wage, Biden pointed the finger at the courts to explain his inaction in staving off an eviction crisis.

In a truly impressive display of solidarity, House of Representatives member Cori Bush responded to this by sleeping on the steps of Congress in an act of protest until Democratic leaders took action to extend the eviction moratorium. Housing activists and other Squad members joined her for a three-day occupation that ended with Biden — through the CDC — issuing a 60 day extension of the moratorium in areas hard hit by the new wave of COVID.

By calling Biden’s bluff, Cori Bush proved an essential lesson for working class activists: when we leverage the power of a movement, rather than relying on backroom negotiations with the establishment, we can win.

Kicking the Can Down the Road

While the addition of 60 days to the eviction count down clock was no doubt a relief to millions, it doesn’t fundamentally change the nature of the crisis facing renters.

Millions were put under enormous financial strain during the pandemic. While stimulus checks and increased unemployment benefits softened the blow, lost wages and new expenses left many working people without enough to cover rent. Even one month’s missed rent can become a long term financial burden and can leave renters vulnerable to landlord harassment.

Despite states receiving $46 billion for rental assistance, only $4.2 billion has reached renters. State governments have executed austerity budgets for decades and were completely unprepared for a windfall of cash. They had to set up an entirely new infrastructure to distribute the federal money and in many cases relied on private contractors to do so. The rollout of rental relief has been plagued by glitches, red tape, and an enormously high barrier to access for ordinary people.

Renters in many states have been asked to provide stacks of documentation in order to qualify for relief. Housing activists have reported coming across applications as long as 45 pages. All the while, landlords have resorted to mobster tactics to kick out struggling tenants. Eric Dunn, director of litigation for the National Housing Law Project, reports a dramatic spike in tactics from landlords to get people out including changing the locks, cutting off utility services, suspending trash pickup, and refusing to make repairs.

You may imagine this is the worst of it, but sadly you’d be wrong. Once a landlord has successfully evicted someone, that eviction record can haunt them for years as they try to secure new housing. Many landlords rely on private tenant screening services to fill vacancies, and many of these services automatically filter out any applicant with an eviction record.

To make matters worse, even if a renter is able to secure a new lease, they may quickly be priced out as rents skyrocket. In the first half of 2021, rent prices soared 9.2%. This is triple the average pace.

Extending the eviction moratorium by 60 days is welcome, but, like most progressive offers from the establishment, it’s rearranging the deck chairs on the Titanic. We need comprehensive housing reform, and ultimately an end to the for-profit housing system, to provide lasting relief to working people.

Private Housing Is To Blame

The housing crisis existed long before COVID exposed its deep rot. Renters make up more than one third of U.S. households and they tend to be younger, poorer, and more racially diverse than homeowners. The median income of renters was half that of homeowners in 2019, meaning they are less likely to have savings and more likely to work in precarious jobs.

The vast majority of rental housing in the U.S. is privately owned and operated for profit. Even the “below-market” rental sector serving low-income renters is overwhelmingly dominated by privately operated non-profits or private, for-profit landlords.

According to a Johns Hopkins study “Fewer players, fewer homes,” the years since the Great Recession have seen an increasing consolidation of the real estate industry, with very few large firms owning an increasing share of rental properties. This has created a highly volatile situation for ordinary people. In such a concentrated housing market, these firms can manipulate housing production to maximize their profits. For example, they can opt to build new housing when demand growth is at its strongest and charge prices far above the cost of production.

This situation will only get worse in the wake of the pandemic as the already low number of small landlords shrinks. More and more housing will be dominated by major financial institutions, leaving ordinary people scrambling to keep up with the cost.

The only permanent solution to the ongoing housing crisis facing ordinary people is for housing to be taken out of the hands of parasitic financial institutions and placed in the hands of the public.

Just 15 firms control nearly a million residential units in the U.S. The largest of these firms, Mid-America Apartment Communities (MAA), made $1 billion in gross profit between June 2020 and 2021. Rather than being used to lower rents or make necessary upgrades to their units, this profit becomes a play-thing for super rich tycoons.

In the immediate term, we need a mighty tenants movement to fight for crucial renters rights laws, where tenants organize with others in their buildings, under the same landlords, and in the same cities, using militant tactics like rent strikes and eviction defense when needed while demanding things like universal rent control and the construction of public housing. We need a cancellation of all back rent accrued during the pandemic, protection from all COVID related evictions, universal rent control, and a massive investment in high quality public housing. Beyond this, as part of a broad socialist transformation of society, we need to take the real estate industry into democratic public ownership.

As with healthcare, transportation, and other key components of modern life, housing should be publicly owned and run by democratically accountable councils of working people, in the case of housing by tenants themselves. As part of our fight to protect tenants from a coming wave of evictions, we should be fighting for a broader vision of society where bloodsucking landlords are a thing of the past.