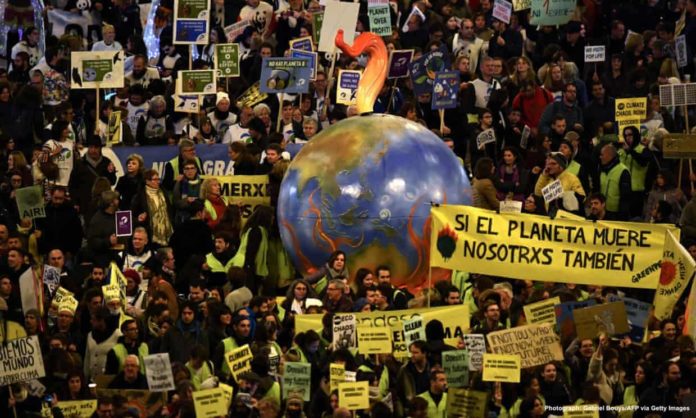 Capitalism is killing the planet — fight for a socialist alternative!

We are living through a decisive period in the fight against climate change. A recently leaked report from the UN’s Intergovernmental Panel on Climate Change (IPCC) has warned that at current rates, we are heading for 3C of warming — well above the 2C limit set by the Paris Agreement to avert a climate disaster.

But this disaster is already unfolding, with tragic consequences. In Zhengzhou, China, 12 people have died after being trapped in flooded subway carriages following extreme rains. In Germany and Belgium, dozens have died in unprecedented flooding. In the US and Canada, severe heatwaves have taken hundreds of lives. It is clearer than ever that we need to act now — not just in 10 or 20 years.

In light of this ongoing catastrophe, November’s COP26 conference in Glasgow, Scotland itself will pose important questions about how to seriously tackle climate change.

Since the last summit, notable only for delaying any action until this year’s conference, we have seen that capitalist leaders like Joe Biden are prepared to make big promises under the pressure of the crisis we are living through. Biden himself has failed to deliver on many such promises, including on the climate. On one hand, he has vowed to “advance environmental justice” whilst on the other, refusing to act against new oil pipelines such as Line 3 and the Dakota Access Pipeline (DAPL).

Meanwhile, a growing list of big business affiliates to the COP26 highlights that any kind of “system change” is off the table for these discussions. Clearly, this year’s conference will not provide any serious solutions for workers and young people facing the worst of this crisis. But it will be an important opportunity to get organized and build a fight for real action.

The climate movement in 2021

The Earth Strike of September 2019, which represented the peak of the climate movement, saw over 7 million mostly young people around the world take to the streets in 150 countries. Since then though, the movement has been through something of an ebb.

In this vacuum of organizing, many young people have looked at other routes to continue the movement.

This includes the rise of Green Parties, especially in Europe. In other cases, people have looked to individual actions, “beyond politics”, through organizations such as Extinction Rebellion (XR). But this kind of action, without a clear idea of system change or the forces that can bring it out, will not be able to deliver the kind of decisive change we need.

What kind of forces do we need?

The initial waves of school strikes pointed toward an approach based on mass mobilizations of young people, linking up with the organized working class, particularly in the Trade Unions. When workers take strike action, they can grind society to a halt. Although smaller-scale actions can be effective, a movement with the backing of the workers’ movement will be essential in winning action on climate change.

This could include coordinated strike action between unions between different countries to bring the globalized capitalist system to its knees, as part of a genuinely international movement against climate change.

A mass climate movement would need to link up with other struggles of workers and young people, such as the struggles against attacks on our right to protest internationally, against sexist and racist oppression, and of workers fighting against mass job losses as a result of the pandemic — all of which have an interest in ending climate change. It would also highlight the systemic nature of climate change, and how it ties into the wider capitalist system responsible for the multi-faceted crisis facing ordinary people right now. This would be an important step not just in fighting for climate change, but for making the popular idea of “climate justice” a reality as well.

This would have to be linked to a clear program for fundamental system change. That means challenging capitalism and fighting for a socialist society where decisions about what is produced and how are decided democratically. Under capitalism, where production is based on the endless drive for greater profits, environmental effects are treated as an “externality”. This focus on short term profit is an inbuilt feature of capitalism. As a result, we see that it is the big corporations themselves that contribute vastly toward the destruction of our planet, with over 70% of CO2 emissions coming from just the top 100 companies worldwide.

Additionally, the food industry accounts for up to 26% of total greenhouse gas emissions. Food is massively overproduced even as millions go hungry worldwide. It is totally unsustainable, but as long as it continues to make a profit, these companies will continue their destructive course.

The technology exists to rapidly replace fossil fuels with sustainable energy sources such as water, wind and solar power, and to produce food along more sustainable lines. But none of these companies will sacrifice their profits to make such a transition willingly.

A socialist program on climate change would involve bringing the big polluters that contribute the overwhelming majority of emissions into democratic public ownership — we can’t control what we don’t own, after all. On that basis, we could plan production in a way that takes into account the environment and the lives of working people. We could immediately begin to address mass greenhouse gas emissions, and the general wastefulness of the current system — including plastic waste and deforestation. Crucially, at the same time, we could protect all jobs, repurposing them and opening up new ones for a mass program of green jobs.

The climate crisis has not waited for us to deal with COVID-19, but it has shown that under capitalism, the international cooperation needed to deal with a large-scale crisis is not possible. Instead, the coronavirus was allowed to become a worldwide catastrophe through problems such as vaccine nationalism, where capitalist states and big business put competition and profit ahead of doing what is needed to fight the virus. More broadly, the approach of the ruling class has been marked by a reactive approach to the virus, with none of the foresight or planning needed to tackle it effectively.

The last COP summit was met with mass protests of over half a million people. We need to start organizing now to build for massive counter protests at COP26 itself in November, as well as local protests in countries around the world.

A COP26 coalition, involving dozens of different campaigning groups, has already begun preparing for protests. This should include mobilizing workers and students on a mass scale — trade unions will need to organize their members to turn up in force and student unions at colleges and universities should arrange for transport to maximize turnout. This should be seen as the start of a new, stronger climate movement with a clear program of action.