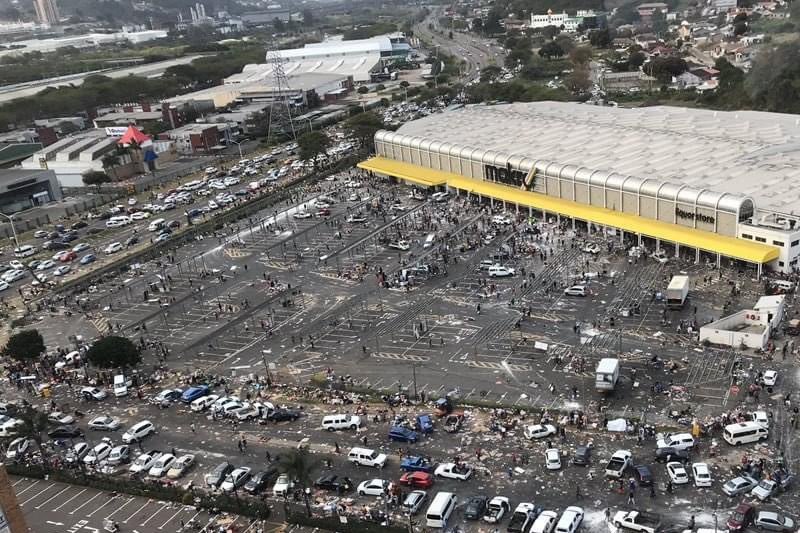 South Africa is currently engulfed in food riots. Scenes from KwaZulu-Natal (KZN), Gauteng, Eastern Cape and the North West have shown masses of people rushing to secure what little they can from malls, grocery chains, and other shops. Many buildings have been set alight as well. At the time of writing, more than 70 people have been killed in the chaos, and more than 1200 arrests have been made. It is almost certain that with the deployment of the South African National Defence Force (SANDF) and a police force increasingly desperate to “restore law and order” that these numbers will rise significantly in the coming days.

Protest action started after the Constitutional Court’s ruling ordered the former president, Jacob Zuma, to present himself to a correctional facility to commence his 15-month sentence after being found guilty of contempt of court. The mobilizations to free Zuma took a qualitative turn in the early hours of Sunday July 11 when more than 20 trucks were torched around the Mooi River area in KZN. Protestors turned to burning and looting in several parts of KZN and later in Johannesburg as the unrest spread nationally. On Monday parts of Pretoria were also on fire as malls in Mamelodi were set alight. In a public address on Monday evening, President Ramaphosa called for calm, whilst announcing the deployment of the South African military to reinforce an overwhelmed police force.

Riots for Food, Not For Zuma

By Sunday it was already clear that these protests had evolved into food riots despite the media’s continued labeling of them as “pro-Zuma” or “Free Zuma”. However this has not prevented the pro-Zuma faction opportunistically using the situation to pour fuel on the fire, with Zuma’s children leading the charge on social media. The damage caused by looting, burning of trucks and infrastructure in KZN alone had exceeded R100 million at this point. The Special Risks Insurance Association (Sasria) expects claims resulting from the current unrest to be in the “billions of rands”. Durban, Umbilo, Umhlanga, Springfield Park are among the worst affected in KZN. Parts of Gauteng are also affected, including Soweto, Berea, Katlehong, Jeppestown, Daveyton, Benoni, Tembisa and Mamelodi. News reporters trying to get comments about Zuma were completely ignored by people scrambling to grab food for their families or items that could later be sold or traded.

The motivating factors of the food riots have little to do with the demand to free Zuma. Many protestors blame the government for the economic crisis. Mass unemployment, lack of opportunities for the youth and corruption in government are among grievances protestors have voiced. However, many people have also joined the riots out of sheer desperation. The fact that supermarkets have primarily been targeted indicates that these riots are about securing the basic necessities to survive.

With the deployment of the army to assist police, the government signaled it had lost control. It must be emphasized that this was done to protect private property and profits, not to protect ordinary people and communities. Instead of using the infrastructure and resources of the SANDF to address the inequality and hunger through distribution of basic necessities to those in need, Ramaphosa — consistent with his response to the pandemic — resorted to deploying state forces with their weapons turned on the masses. They have warned communities “not to provoke [them]” and that they will not tolerate “ill-discipline”.

The violence of a capitalist system

It may be tempting to dismiss the current unrest as acts of “senseless violence”, however it is important to understand the ongoing systemic violence that the capitalist class and their stewards in the South African government have enacted on the working class and the poor for years. Almost 500 days of lockdown conditions have accelerated the economic downturn that was already evident in 2019.

In the past 10 months living costs have skyrocketed with rampant inflation as the cost of the average household food basket increased by 7.1%. Electricity price increases as high as 17.8% went into effect at the beginning of the month despite the continued spells of nationwide load-shedding. This has taken place after a 7% contraction in the South African economy in 2020 and a swelling of the expanded unemployment rate to an historic 43.2% with more than 1,5 million people losing their jobs in the pandemic. The fallout of this economic devastation has breached through all layers of the working class as South Africans take on increasing levels of consumer debt to support their livelihoods.

More than a year ago, praise was heaped on Ramaphosa for the handling of the COVID crisis with implementation of a hard lockdown and a R500 billion stimulus package to counter the effects. A year later, less than a third of the stimulus has actually been utilized despite the continuing precarious situation brought on by the pandemic. At the end of April the monthly R350 Social Relief of Distress (SRD) grants for the unemployed were halted as the ANC pushed the narrative that the South African economy was on the road to recovery. This is on top of the fact that the Treasury says they will be flattening the budget over the next three years. When taking an increasing population and inflation into account, this amounts to a 10% decrease in spending per person.

We also see increasingly severe infection waves despite the government consistently making premature announcements on how the economy is on the path to recovery. This is not at all helped by a fumbled vaccine acquisition and rollout campaign that has led to only 2,3% of the country being fully vaccinated, amongst the lowest in the world at the moment.

Factionalism has driven a deep wedge within the ANC over decades. Ramaphosa entered office with an impossible task to rid the ANC of corruption, one which we predicted would lead to the complete destruction of the party. Just how deep corruption goes in the ANC has been exemplified in the Covid corruption scandals that continue to emerge since last year — instead of ridding the ANC of corruption, Ramaphosa’s botched handling of the pandemic has created more avenues for it. The contradictions that the ANC exists in are perhaps most clear with the biggest looters in society calling on the desperate and poor not to loot!

Neither Zuma’s nor Ramaphosa’s faction have the support of the masses. And many protestors have voiced anger with the ANC as a whole. There is a clear distrust between the working class and the ANC. Hunger, desperation and inequality continue to erode the ANC’s credibility, as they continue to put the cost of the pandemic and previous recessions on the backs of the working class with brutal austerity measures. In 2019, for the first time since 1994, less than half of the voting population cast their ballots, and the ANC struggled to even secure a majority. It signaled a serious disillusionment in the political establishment.

While the RET brigade [RET — Radical Economic Transformation] headed by Jacob Zuma uses this moment to further their agenda of discrediting Ramaphosa through sowing anarchy and confusion, the president will do all he can to appease the interests of the private sector. The gunning down of the Marikana mineworkers in 2012 gives us a mere glimpse of the measures Ramaphosa could take to ensure the investor class trusts him. Neither of these factions will address the root of the current upheavals — the failures of the capitalist system and the ANC’s shared austerity project. Both factions are married to the capitalist system that gives them access to power. The pandemic has pushed us into a new political era and confidence in the ANC to whether the continuing storms is eroding more rapidly than ever.

A formula of an increasingly distressed working class along with a complete betrayal of the ruling parties in handling the pandemic would make anybody wonder why such explosive events had not yet taken hold over the past year. But as Marxists we recognize that there must first be a spark. These events have shown that there is no stopping the working class once all fears have been pushed aside. The accusations by Police Minister Bheki Cele of “instigators” causing the riots are missing the point entirely.

Chaos and anarchy not the answer

The capitalist economy is a bloody crime against the working class and it needs to be overturned. However, the destructive and unorganized nature of the riots continue to alienate the masses. This is despite the majority of the working class sharing the same frustrations with those who have turned to these tactics.

Working class communities are raising serious concerns about food security and further jobs losses due to the destruction of property. The obstruction of supply lines and torching of facilities related to healthcare pose an even more serious problem while South Africa is gripped with its third and worst wave of COVID-19 so far. Shops and malls across the country are emptying stock and closing down as preventative measures, telling workers to stay home — unpaid. The major chains will have damages and lost stock paid out by their insurance, while small businesses will suffer the worst effects. Not only will this accelerate the transfer of wealth and capital to the big corporations, but it poses a serious risk of dividing communities even further.

Although these riots could be effective in securing basic needs in the immediate term, the only way to ensure that the basic needs of all people are met is to overhaul the parasitic capitalist economy into one that is planned democratically. For this, the working class must seize under its control the commanding heights of the economy. Instead of stealing bread from the shelves, we must seize the bakeries, the mills and the commercial farms! Instead of destruction of workplaces and services, we need organized and disciplined mass struggle to secure the factories, distribution lines and essential infrastructure under democratic worker and community control! Only by removing the bosses from these vital industries can we guarantee that food and basic necessities are accessible for all and not sold for profit. Instead of stolen bread for one day, we can guarantee to keep that bread coming and end hunger entirely.

Build an organized, disciplined and democratic mass struggle for socialism!

We must also link our struggles with the militant layers in eSwatini that are revolting against the last-standing absolute monarch in Africa, driven by a similar inequality as we see in South Africa. We can take inspiration from the uprisings taking place in Latin America, such as in Colombia where a one-day general strike called by the trade union leadership ignited a mass anti-government movement with prominent slogans like “We’re sick of surviving, we want to live”. These ongoing protests have forced the withdrawal of anti-working class tax reforms and the resignation of the finance minister. It has shown the world that even in desperate and pandemic conditions, the working class can and must fight back. Above all, we must build a mass working class movement that will ensure these inevitable uprisings will be democratically organised, led by the working class, and be committed to fighting for an international, socialist programme.