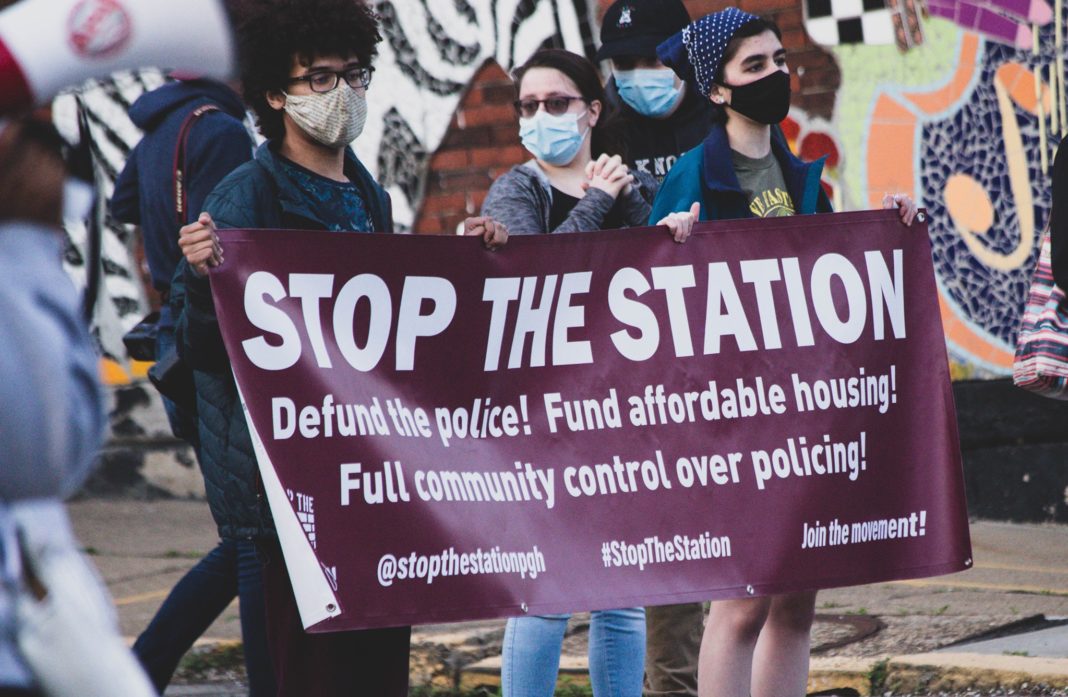 Last summer, Pittsburgh, along with the rest of the nation, saw the Black Lives Matter movement’s powerful resurgence in the wake of the police killing of George Floyd. Amidst massive protests and repressive police violence against youth and people of color, Stop the Station formed as a grassroots community coalition to stop the proposed relocation of a police station to East Liberty, a historically Black working class neighborhood that has been the epicenter of Pittsburgh’s dramatic gentrification. This remains an ongoing struggle, with the plans for the station appearing to have paused for now.

Stop the Station has since widened this fight beyond the district and launched a citywide referendum campaign for Community Control Over the Police (CCOP). CCOP’s central demands are for a democratically-elected, civilian-led police control council with full powers to hire, fire, subpoena, set budgets and department policies, and take over the mayor’s negotiation and approval of police union contracts. This independent grassroots movement has united BLM and housing activists, social workers, teachers, youth environmental activists, socialists, and ordinary working class residents across the city.

A Guilty Establishment: Building on Lessons from the Past

Today’s fight for community control builds on decades of struggle for democratic oversight and police reform in Pittsburgh. After years of rampant police violence, the murder of Jonny Gammage in 1995 galvanized support for what eventually became Pittsburgh’s Citizen’s Police Review Board (CPRB). While the CPRB’s creation represented a victory for the working class coalition that organized a hard-fought referendum campaign, the board has not lived up to the movement’s vision. Like similar review boards across the country, it has failed to substantively hold the police accountable, due to being rendered toothless by establishment politicians, police, and courts.

Two-thirds of Pittsburgh officers have received one or more misconduct complaints, indicating that problems with the police are deeper than just “a few bad apples.” Yet only a pitiful 3% of more than 3,000 complaints received by the CPRB over twenty years have resulted in a public hearing, which at best produced disciplinary recommendations the board itself was powerless to enforce! The board is not democratically elected, but is instead appointed by the mayor and City Council. Black and working class people in Pittsburgh therefore have no way to hold the CPRB accountable, nor can they expect corporate Democrats like Bill Peduto, who over his eight years as Mayor increased police funding by 50%, to fight for a stronger board.

Pittsburgh’s Democratic Party establishment has historically betrayed Black working class neighborhoods, from the lower Hill District’s destruction for the Civic Arena in the 1950s, to the mass eviction of Penn Plaza residents in 2015 to make way for luxury redevelopment. More recently, Peduto’s bloated police budgets have paved the way for over-policing, which has aided gentrification and the mass displacement of 7,000 Black residents (9% of Pittsburgh’s Black population) between 2014 and 2018. Many also recall his callous response to the 2018 police killing of Antwon Rose II, a teenager shot three times in the back after fleeing a traffic stop and whose killer cop Michael Rosfeld was acquitted by Democratic District Attorney Zappala. Peduto’s first statement did not condemn the murder, but instead reminded people that the suburban town of East Pittsburgh was outside city jurisdiction, and therefore beyond his responsibility.

Peduto again came into conflict with the BLM movement last summer, after covering up police brutality against peaceful protesters. Hundreds marched to his house and were met with further violence, all as the movement’s demands for accountability and cuts to the police budget were met with patronizing derision. The widespread frustration with eight years of racist over-policing, gentrification, and pro-corporate policies came to a head in this year’s May primary election, when Peduto was finally voted out.

Also in May, two recent ballot initiatives passed overwhelmingly that ban no-knock warrants (“Breonna’s Law”) and limit solitary confinement in Pittsburgh jails. Last November, 78% of voters also supported strengthening the CPRB’s ability to compel officers to cooperate with investigations. These referendums demonstrate a deep desire for changes to policing, and can be built upon to point further in the direction of real democratic workers’ control over public safety in our communities. This would include the power to rein in police spending—including the tens of millions spent on new facilities, surveillance technology, and “less lethal” weapons—and to redirect that money toward well-paid public sector jobs, affordable social housing, and social services.

A victory for CCOP would be a huge step forward for Pittsburgh’s Black and working class communities. This victory would extend to the entire BLM movement, and the millions of Black and brown youth who are hungry for real systemic change going beyond Derek Chauvin’s indictment. Most important is the foundation this campaign can set for similar organizing initiatives across the city. Building out this movement nationwide on a sustained, independent basis will be key to winning significant concessions from the two-party corporate elite, on policing as well as other key demands like taxing wealthy corporations and developers, like UPMC and Walnut Capital in Pittsburgh. If CCOP makes it to the November ballot, the movement will have to fight to not only win and defend such a victory from court challenges from the police and establishment attacks; we must also continue to organize to ensure it elects working class representatives, particularly those from the Black community, who are willing to break with the capitalist political establishment and stand with our movements.

A Grassroots Movement with Democratic Decision-making

Stop the Station has raised the idea of democratic community control since its formation; but the possibility of setting a national precedent materialized last February when the movement voted to proceed with a ballot referendum campaign at a community action conference with over one hundred participants. Three such conferences discussed, debated, and voted upon major decisions regarding strategy, platform, and even the campaign’s name. The third conference elected an initial Coordinating Committee to lead CCOP, including members of Socialist Alternative and other community leaders and organizational representatives. Grassroots democratic structures like this are important for all social movements to take up not only to be sustained, but to collectively determine the best possible strategy and tactics to win demands.

Throughout this process, the perspectives and experiences of Pittsburgh’s working class, youth, and people of color have factored into grassroots legislation for community control over the police. Attending each conference was University of Pittsburgh law professor and progressive Congressional candidate Jerry Dickinson, who volunteered to draft legislation for a new democratically-elected Civilian Police Control Council. This bill, voted upon by the movement in May, is based on the democratic will of action conference participants and working class residents we spoke with on the doors and in the streets. It’s important for progressive candidates like Dickinson and elected officials to use their offices and campaigns in this way, to help organize and empower working class-led struggles.

CCOP has also had an impact on the Democratic mayoral primaries, during which gentrification and police violence were top defining issues. Running to the left and heavily critical of Mayor Peduto was PA State Representative Ed Gainey, who is now likely to become Pittsburgh’s first Black mayor. Gainey campaigned on promises to take on UPMC and bring more affordable housing to Black and working class neighborhoods. He’s also called for demilitarizing the police, and has expressed openness to a democratically-elected civilian council without fully committing support. Peduto meanwhile dismissed the idea, with the tired excuse that his hands are tied by state law when it comes to initiating any meaningful police accountability measures.

Many are rightfully thrilled that Peduto’s tenure of lies and broken promises is coming to an end. However, far-reaching change will not be driven by Gainey, who enjoyed the Democratic Party establishment’s endorsement and has a concerning record of accepting money from the same corporate developers that have driven racist gentrification. Change will be driven by the workers and youth who are participating in movements against police violence, racism, and inequality. Gainey’s support for “community policing” reforms while profit-driven urban renewal continues to violently reshape working class neighborhoods will fall far short of tackling these crises. Instead the movement should call on him to unequivocally stand with this historic campaign, and help this movement win the nation’s first democratically-elected Civilian Police Control Council.

The movement for Community Control Over the Police has highlighted the need for a new independent party, rooted in the working class and youth. Such a party could serve as a sustained mass vehicle for the struggle against systemic oppression and capitalism, which relies on police to protect private property and profits. The independent nature of this campaign has already generated excitement amongst workers and Black residents in particular, as many working class people already understand why we can’t rely on status quo politicians. It’s also begun to spark conversations around the need for a democratically planned socialist economy, where workers have a say not only over policing and public safety, but over our workplaces, housing, schools, and utilities.