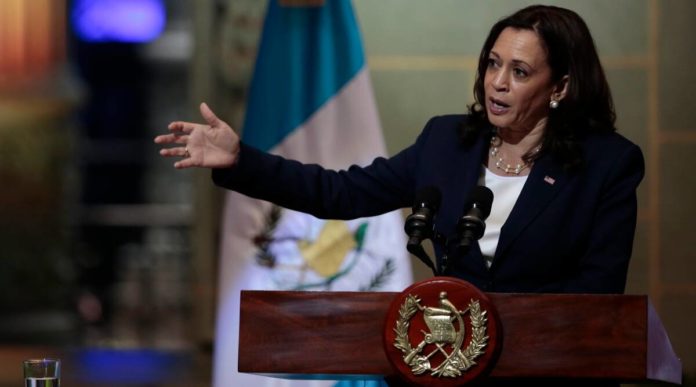 In May, more than 180,000 migrants were taken into custody as they tried to cross the U.S. border, representing a historic surge in migration from Central America not seen since the early 2000s. In response, the Biden Administration sent Vice President Kamala Harris to Guatemala to discuss the causes for the surge. The message of her visit was impossible to misinterpret: “do not come.”

Harris argued that the leading cause of migration to the U.S. was corruption and the failures of the local governments to control violence and poverty. While there is certainly truth to this, not once did she acknowledge how the effects of U.S. imperialism – through neoliberal trade deals like NAFTA, policies associated with the “war on drugs,” or active support of coups ousting left-wing leaders – have caused the very instability and dire economic conditions in the first place. By valuing the profit of U.S. business over the working and living conditions of people in Central America, these policies have devastated the region and directly contributed to the increase in violence, poverty, and desperate people fleeing that we have been seeing for the last few decades. In an attempt to distract from this feeble position, Harris did, however, pledge 500,000 vaccine doses to “make a dent” in the COVID crisis still wracking the region and reiterated that aid in the form of U.S. investment was on the horizon. This was conditional, however, on “certain progress [being] made” by the Guatemalan government to reduce migration.

Surge at the Border

Migration from Central America, especially over the last few years, has been steadily increasing as conditions continue to worsen. As the effects of climate change accelerate, there are an increasing number of environmental and climate refugees. The extended drought season and extreme weather events, such as hurricanes and tornadoes, have decimated the region and, as a result, any chance at a decent standard of living for many Central Americans. Climate change paired with the pre-existing inequality, poverty, corruption, and violence has forced many Central Americans to leave their homes to try to better provide for their families. When the pandemic hit, it only further exacerbated these conditions. The surge in migration of unaccompanied minors over previous months gives an insight into the desperation of families in this emerging period of climate upheaval.

The response by a section of the political establishment in the early 2000s was to attempt bipartisan “comprehensive immigration reform” to ensure a controlled steady flow of migrants who are kept in a semi-permanent second class status on the “path to citizenship.” This approach was supported by a majority of the ruling class who benefit from the additional, cheaper labor. However, the attempts at immigration reform collapsed under pressure from the right and since then there has been a concerted effort to ramp up security measures, including the creation of Immigration and Customs Enforcement (ICE) and Trump’s border wall more recently. As part of Biden’s response to the surge at the border, he has pledged $4 billion to fight the causes of migration in the region for only a four-year period. However, this aid is set to overwhelmingly go to non-profit organizations and the private sector, such as the Harvard T.H. Chan School of Public Health and Microsoft, instead of local governments. This is not even a drop in the bucket of what is needed to improve circumstances in Central America long-term.

Biden campaigned on the promise of reversing Trump-era anti-immigrant measures, including reuniting families and tackling the asylum backlog. While he did use executive order to reverse the Muslim ban and protect Dreamers, Biden has only reunited seven families since February out of the over 5,000 families separated under Trump. Under the 1980 Refugee Act, asylum seekers are legally allowed to enter the U.S. in order to apply for an interview and a hearing about their case to be granted asylum. Trump enacted policy Title 42, which denied asylum seekers these rights by turning them away at the border before they could even get to the U.S. Biden has continued this policy under the guise of public health concerns, despite his promises to hasten the process for those with pending asylum claims under Trump.

While Biden’s proposed budget for the Department of Homeland Security will stop funding Trump’s border wall, much of the budget is aimed towards funding ICE. Biden promised to stop the detention of migrants at the border, but the budget funds 32,500 detention beds, which when compared to last year’s budget is only a decrease of 1,500 beds. Biden also promised to stop the use of 287(g) agreements, which allows ICE to deputize local police forces to help the agency. This budget proposal instead would continue the practice and increase the amount of federal and local programs that can use this policy, such as the Criminal Alien Program, which permits ICE access to individuals in prison or jail for deportation.

We Need a Fighting Movement

The failure to carry out any significant immigration reform has become a weak point for the Biden administration. Regardless of party affiliation, about 68% of Americans agree that the current process for immigration is not working and that the American government is failing to act adequately to address the crisis. While there is a big section of the ruling class that sees more immigration as a solution to the current domestic labor shortage right now, hardened opposition in the Trump-dominated Republican Party and a lack of a coherent immigration policy among Democrats all but dooms substantial immigration legislation in the short-term. Neither capitalist party has a solution to address the root causes of migration, because both parties relentlessly supported the neoliberal policies in the region that have led to mass migration in the first place. What we are seeing now with climate refugees will only become a more dire situation over time as climate change continues to worsen living conditions.

With our political and economic systems in the hands of capital, everyone in the U.S. will continue to see deteriorating living conditions and an artificial scarcity of decent jobs and housing while the ruling elite will cynically pit immigrants and American workers against each other. We need a workers government that would extend massive aid to the areas like Central America that have been devastated by U.S. imperialism. We need an urgent fight against xenophobic ideas around migration in sections of the working class. A united movement of American-born and foreign-born workers will be necessary to overcome xenophobia and racist divisions, win better wages, working conditions, affordable housing, decent healthcare, and citizenship rights for all undocumented workers in the U.S.