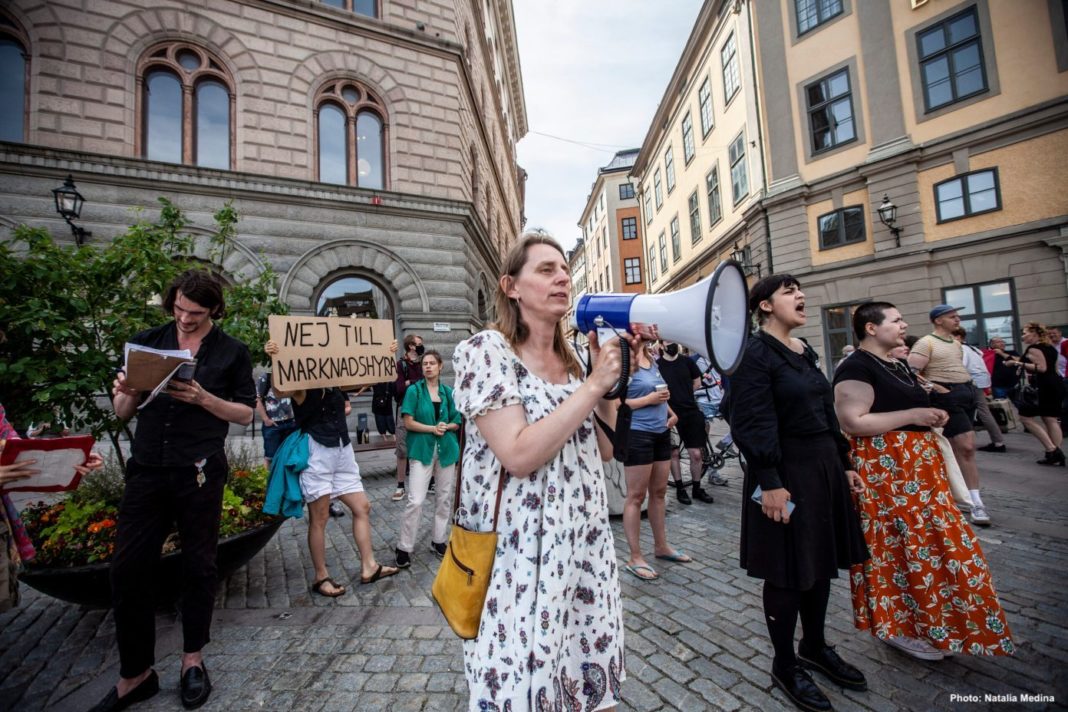 Monday, June 21, 2021 became a historic day in Sweden. For the first time ever, a prime minister has been defeated out after the Riksdag voted in favour of no-confidence. It is the struggle from below against market rents that overthrew the government, which finally fell victim to its right-wing policy.

Elin Gauffin, national spokesperson for the campaign “No to market rents”, Rättvisepartiet Socialisterna (ISA in Sweden)

Already at 8 o’clock on Monday morning, activists from the unique grassroots campaign “No to market rents”, the protest movement that was at the forefront of the resistance, gathered at Mynttorget outside the Riksdag in Stockholm to provide support for the no-confidence motion.

Speeches and chants such as “We will stop market rents — now!” and “Our rents are too expensive — refuse, refuse market rents!” echoed in the square during the countdown to the expected declaration of no confidence. It was a fighting atmosphere and amongst the participants in the demonstration there was the feeling that we are about to win an important victory.

In contrast, the main liberal newspaper Dagens Nyheter concluded: “Today the most important housing reform of the decade fell”. And in this struggle, socialists and ISA members in Rättvisepartiet Socialisterna played a key role.

This government of the Social Democratic Party and the Green Party with Stefen Löfven as prime minister was formed after 131 days of negotiations following the elections in September 2018. It was based on the 73 point “January Agreement” between the two liberal parties. It included a number of neoliberal and anti-worker attacks, making it easier for employers to sack workers, abolishing a special tax on high incomes, agreement not to limit private profit making corporations in the welfare sector, allowing for the privatization of the public employment service, increasing subsidies to household services for the rich and more.

Our party — Rättvisepartiet Socialisterna, RS, ISA in Sweden — campaigned from day one against the agreement and a government formed on that basis and argued for a new election. We called on the Union of Tenants to take the initiative by calling mass meetings and a national day of protest. The Left Party, however, did not vote against the new government, arguing that a Social Democratic government was a lesser evil than the right-wing alternative, including the racist party Sweden Democrats. This was done despite the agreement even having a paragraph saying that the Left Party should have no influence in Swedish politics during the government’s term of office. The Left Party was not consulted over the Agreement.

On this basis of the Agreement, the government started to implement a program that was to the right of the government of right-wing parties in 2006–2014. In addition to the points mentioned, they dramatically increased the military budget, restricted the right to strike and continued its anti-refugee policies including mass deportations.

The straw that broke the camel’s back

Landlords, property owners and right-wing parties have long wanted to introduce market rents. The housing policies of the reform years 1945–80 have gradually been abandoned. Public housing has been privatized to a high degree, state planning abolished and subsidies have disappeared. Yet, there have still been restrictions on rents, built on a system of negotiations between the Tenants Union and the Property Federation as well as public housing companies.

The January Agreement planned to introduce market rents for new housing, i.e. the right for landlords to set any rent they want without negotiation. This would eventually open the door to market rents for all rented flats.

Our party, RS, early identified this as the issue to campaign and mobilize on. The growing discontent beneath the surface in society — against rapidly increasing inequality and constantly worsening conditions through cuts and privatization — could be channeled on this issue. Already, rent increases of 40–60 percent had been introduced in areas where private property companies made fake “renovations”. At the same time, campaigns organized by our members in local areas, in parts of Gothenburg and Stockholm, had mobilized tenants and secured victories.

Already in the spring of 2019 we were the driving force in big mobilizations in Gothenburg and Stockholm against the new proposals for market rents.

When the Tenants Union nationally refused to join the campaign or set up a serious resistance, and even expelled the chairman of the union in West of Sweden, RS member Kristofer Lundberg, the independent campaign took new initiatives.

In early 2021, the campaign was stepped up. We knew the Official report of the Swedish government regarding market rents was to be presented at the end of May. Many local tenants unions and activists joined the campaign, as well as most of the left, including regions of the Left Party.

This campaign has become the strongest national challenge to the government, with local committees around the country. Mass meetings on Zoom were held from January onwards. On April 18, 160 local protests were organized, limited in size by Covid restrictions, but well covered in the local press and on social media.

Again on June 3–5, new days of protests were organized after the report was presented. This time, national media also covered the issue. The mass of tenants became aware of the threat. Facts such as the rent increases in Helsinki, Finland, of over 40 percent following introduction of market rents became well-known.

The pressure from below and with the next scheduled elections looming in just over a year meant that the Left Party saw its chance to hit back against its humiliating role as “the government’s doormat” in parliamentary politics. The party stuck to its “red line” and threatened to withdraw support for the government if market rents were proposed.

The government’s attempt to portray this as a “limited proposal” only covering newly built housing failed. Everyone understood it was only the first step. And if it was so limited, why did the government risk its future?

After previous compromises to support the government, the Left Party finally stood up. Many also saw through a second attempt by the government to propose negotiations between the Union of Tenants and the property companies on the issue, since such “negotiations” would take place under the threat of market rents.

The vote of no confidence was also supported by the brown-blue opposition parties — the Moderate Party, Christian Democrats and the racist Sweden Democrats. This has been used in the media to say the left supported these parties or opened the way to them forming a new government.

But it is exactly the policies of the present government that has opened the door for the right wing. These parties have exploited discontent by scapegoating immigrants and poor working class areas, when the real blame for the destruction of welfare lies with the banks, the rich and their political parties.

It is the kind of grassroots campaign we’ve built now that can challenge the right. This victory in the first round against market rents should be the beginning of a mass campaign against the entire rightwing agenda.

Now ex-Prime Minister Stefan Löfven has a week to announce whether there will be rounds of negotiations or an extra election, which has only happened in Sweden once before — in 1958.

The fight has dealt the January Agreement a death blow and if Stefan Löfven is to return, the proposal for market rents must be withdrawn.

The focus in this governmental crisis has been on class issues and the entire establishment has been shaken up. Market rents was the straw that broke the camel’s back. Unlike all the right wing parties, we look forward to an election.

Opposition to market rents and class justice, and the events of Monday, June 21 has increased self-confidence and given hope. The best outcome now would be an election that could strengthen those parties that are against market rents and right-wing politics in general. The “Campaign against market rents” would then be partly reorganized into an election campaign for the Left Party, but still organize the mass protests we plan for September. The Left Party has increased its support among activists right now and many people appreciate that someone has finally stood up for workers and been prepared to resist.

The calm period in Swedish politics is definitely over. The wider working class has been dormant from struggle for a long period and has so far not moved into activity, but is a spectator to developments. But what is happening now is creating important openings and turmoil.

The role of Rättvisepartiet Socialisterna is to argue that an unbroken line is needed between the struggle and the necessary socialist political alternative, and that the movement needs to be broadened. The admittedly very important housing issue must be connected to other equally burning issues such as education, health care and the climate. In dialogue with ISA, our party needs to closely follow the political developments this summer and see how, while maintaining our independence, we can extend our orientation to the Left Party.