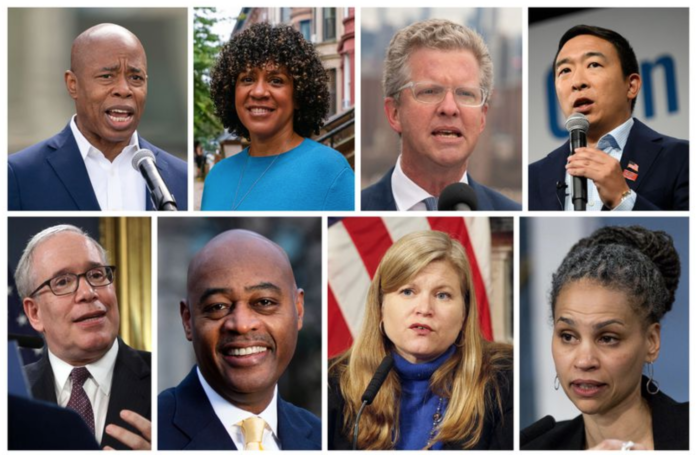 With the primaries about to begin for the New York mayoral race, the city’s 8.4 million residents are staring down the likelihood of a new administration even worse than that of the dangerous and disappointing Bill de Blasio.

After a series of scandals and missteps by the leading “progressives” in the Democratic primary race (Scott Stringer and Dianne Morales), the polls show three moderates leading: A Literal Cop (Eric Adams), The Meme Candidate (Andrew Yang), and The Technocrat (Kathryn Garcia).

This situation highlights the failure of the left in New York to put forward a viable candidate to take on the capitalist establishment, as well as demonstrating the absolute necessity for the multi-racial working class to come together to fight for an independent alternative to the Democrats.

Adams, Yang, and Garcia – No Friends of Working New Yorkers

The latest NY1/IPSOS poll of the Democratic primary has current Brooklyn Borough President Adams at 22 percent, investor and former presidential candidate Yang at 16 percent, and former NYC Sanitation Commissioner Garcia at 15 percent. In addition to being close in the polls, all three candidates are well aligned in their support for issues that will maintain a status quo that hurts the working class in the city.

All three are staunch in their opposition to the movement to defund the police, even though the NYPD uses their bloated budget to harass the most vulnerable people in New York. In fact, a vote for any of them would likely mean an increase in police budgets and further police occupation of public spaces in the city (recently foreshadowed by the violent way the NYPD has begun clearing city parks at night).

The frontrunners are also unified in their support for the real estate lobby: all three have taken plenty of donations from developers and landlords, have said they do not support a rent rollback in rent stabilized apartments, and do not support canceling rent during the COVID-19 pandemic. They also have pledged to push for the creation of more anti-union charter schools if elected.

It’s clear from these and other issues in their platforms that any one of Adams, Yang, or Garcia would at best represent a continuation of the failed policies of the de Blasio era, and at worst would push New York in a more reactionary direction.

Where Is the Left?

From the beginning of the race, the progressive and socialist left in the city has been fractured and unable to coalesce around one candidate.

Scott Stringer received an early boost in September 2020 when he was endorsed by state senator and Democratic Socialists of America member Julia Salazar, but his campaign has since cratered after past sexual harassment by Stringer was brought to light. Salazar and the Working Families Party recently changed their endorsement to Wiley.

Dianne Morales was certainly adept at co-opting the language of our social movements, including the demand to defund the police by $3 billion. However, she has been derailed by serious allegations of staff mistreatment, as well as refusing to recognize the demands of her campaign workers who formed a union (in fact, she fired 40 of her staff members in the wake of the unionization). Perhaps all of this should come as no surprise since she served as CEO of the nonprofit arm of one of the worst slumlords in the city.

Maya Wiley is the least damaged of the nominally progressive leading candidates, but she was a loyal de Blasio soldier for two and a half years of his administration. Her credibility is increasing after endorsements from AOC, Salazar, and others. But it’s concerning that DSA elected officials are endorsing a politician with no record of fighting the establishment by building the power of the working class. This class struggle strategy isn’t incidental – it’s how the socialist movement has won major victories from the beginning. If elected, Wiley will not lead the necessary fightback against the billionaire class in Wall Street, Big Tech, Big Pharma and real estate who really run New York.

In addition to the general weakness and fracturing of the left leaning candidates, the 2021 election marks the first time that ranked choice voting (RCV) will be used in municipal primaries, which has the potential to harm left candidates more than it helps them. Socialist Alternative knows all too well how the establishment can use RCV as a tool to attack left campaigns, after our experience with the Ginger Jentzen campaign in Minneapolis in 2017. Running on a conversation-defining demand for rent control, Jentzen won the most first place votes, but narrowly lost after ranked-choice votes were redistributed.

The NYC branch of DSA – the largest socialist organization in the city – chose to focus their not-insignificant electoral power on attempting to win six city council races this year. They did not attempt to put forward a mayoral candidate, leaving the race devoid of a socialist voice. It remains to be seen how many of the six candidates will win, although some, like Tiffany Cabán in Queens, stand a good chance. However, the city council (let alone individual council members) is much less powerful than the mayor. The lack of coordination on the left in the mayor’s race has overshadowed DSA’s council candidates. A strong mayoral candidate accountable to a socialist organization could have galvanized the down-ballot candidates. Despite our differences in program and strategy, Socialist Alternative calls for registered Democrats to vote for DSA-endorsed City Council candidates where they are running.

The questions that socialists and others on the left must ask themselves is how did we get caught so flat-footed by the 2021 mayoral election, and what needs to be done to win actual change for the working class in New York?

For Socialist Alternative, the answers are clear: the present situation is the result of a lack of an organized working-class approach and movement that is independent from the death trap of the Democratic party. If we want to make sure this type of election isn’t repeated in four years, we must build an organization that can take on both the right wing and the establishment Democrats of the city.

For us, independence from the Democrats is not a trivial matter of what ballot line a candidate chooses to run on – it is a vital question of how to build and win lasting power and material gains for the working class, poor, and oppressed.

The leading candidates in the mayoral race are all, in differing ways, representatives of the ruling class – the corporate interests that dominate city politics would be delighted if any of them won. By flooding the candidates with money and packing the race full of their representatives, the ruling class is able to exercise hegemonic power over the politics of New York.

Their grip over the Democratic party is so tight that there is no point in attempting to take over the party to reform it into a vehicle that can fight for the working class. Any attempt to do so will eventually either be blocked and cast out of the party entirely, or assimilated and co-opted by the establishment. AOC and Salazar endorsing a de Blasio liberal in Wiley is a sad testament to the strength of the Democratic party cage.

The only way to topple the ruling elite that controls politics in New York is to take them on from the outside. The example of Kshama Sawant in Seattle points the way forward for the left all across the country. Sawant, an SA member, has won three straight council elections by running bold, independent socialist campaigns that are backed by the strength of the movement generally, and of Socialist Alternative’s strategy and tactics specifically.

Changing the political dynamic in New York will require fighting on many fronts to break the stranglehold of the Democratic party.

It will mean working within the labor movement in the city to build truly democratic unions – not unions controlled by ossified bureaucracies that are tied to the existing establishment. It will mean building power neighborhood by neighborhood by bringing working people into struggle to wrest control of their city from a ruling class that exists only to exploit them. And it will mean building a new type of political party that is by, of, and for the working people, youth, and oppressed of New York.