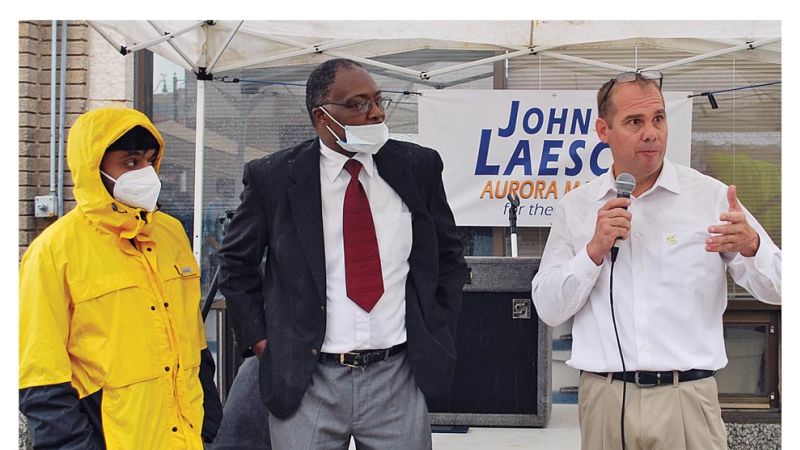 Last summer the BLM movement brought mass protests to all fifty states. Suburbs and small towns held weeks of sustained actions demanding racial justice and systemic change in the wake of George Floyd’s murder, in the middle of a pandemic and global economic crisis. In one of the far western suburbs of Chicago, Aurora, the BLM movement featured clashes between protesters and police as explosive as anything we saw in major cities. There were multiple days of protest in front of the police station, and the response included tear gassing protesters and violent crackdowns.

Aurora is Illinois’ second biggest city, with a population just under 200,000. A deindustrialized small city, twice the size of Flint, MI, Aurora is home to large Black and Latino communities. It is heavily working class, and home to a significant number of warehouses and trucking companies.

The summer BLM protests forced Republican Mayor Richard Irvin, the first Black mayor of Aurora, along with the city council to create a civilian review board for the police department. This new board is an unelected body with no hiring and firing powers, a hollow concession reminiscent of those made in Democratic-led cities across the country.

Going into Illinois’ local elections in the spring, a real question emerged about the impact BLM would have on the local races. A small number of progressive candidates were slated to run, and the Republican party was looking to cash in on the distrust sewn at the national level about the election results and Trump’s takeover of the party. In order to avoid a wave of reaction sweeping the Fox Valley area, working-class candidates running on a clear program linked to the BLM movement over the summer were urgently needed in these races in order to mobilize the workers and youth that were in the streets last summer to vote in these local elections.

Fighting for a Working Class Alternative in the Suburbs

Broadly, suburban and small town elections are low visibility, low turnout affairs, often run on a non-partisan basis (meaning no political party affiliations appear on the ballot). The ruling class has set up a gerrymandered, confusing, overly bureaucratic process precisely to make it as difficult as possible for working people to take part. In Aurora, this has resulted in voter turnout failing to reach 10% in consecutive election cycles (2017, 2021).

In this context, John Laesch launched a campaign for mayor. Laesch is a construction worker and working class activist that served on Aurora’s school board, and ran for Congress in 2008. Running his campaign out of his house, he pledged to be an activist in city hall and ran primarily on a local Green New Deal.

Laesch however didn’t have a platform on race and police brutality, partly due to the recent passage of the civilian review board, partly because local BLM activists requested he not speak on these issues as a white candidate. We openly criticized this approach, because overcoming systemic racism can only be achieved by multiracial working class solidarity, which requires left leaders of all races to speak openly and boldly against horrific police murders and violent racism that is baked into the capitalist system. Despite this weakness, as the Laesch campaign progressed, Fox Valley Socialist Alternative endorsed, pointing out that it would take building a mass movement to win this campaign, a Green New Deal, and an end to racism and police brutality in Aurora.

The challenge the campaign posed to the establishment meant that they were going to go out of their way to discredit and derail Laesch, and the movement was going to have to go all out to win.

Because of Socialist Alternative’s national experience of working with socialist and progressive candidates who are running as Democrats and independents alike, and the clear conclusions we’ve drawn about the need for a new party of the working class, we thought that in Aurora it was vital to fight for this campaign as the only working-class alternative in the race. We called on Laesch to run as an independent and help take steps to form a new party. With John’s connection to a network of activists in the Chicago suburbs, his break from the Democrats could have sent shockwaves through the local left. Along the way we attempted to explain the weaknesses of the campaign to the workers and young people around us at the time, in particular the challenges of running in the Democratic Party and the lack of a program around racism.

The Laesch Campaign on the Ground

Over the course of the election cycle, a small layer of young workers found the campaign as “the political thing” going on, and looked for Laesch to fill the vacuum of working-class leadership. With the number of yard signs going up in February and March, it was clear that Laesch and the demand of a Green New Deal for Aurora had broad, albeit passive support.

Because of the non-partisan character of the elections, the confusion in the political situation, the blurred lines between Mayor Irvin and the other candidate in the race, Judd Lofchie (a longtime alderman and conservative Democrat), it was even more important that John Laesch be crystal clear about his political affiliations and his program. But this wasn’t the approach of the campaign. Despite the race being non-partisan, Laesch chose to run as a Democrat, in an effort to make the “broadest possible appeal” by leaning on the assumption that they could mobilize even wealthy, more conservative Democrats who vote in local politics around the idea of fighting corruption and cleaning up downtown.

In reality, this narrowed the scope of the campaign. Laesch spent more time talking about “good government” and hyper-local issues than talking directly to the working class about the need for a mass movement to win a Green New Deal and community control of the police. At the doors, Laesch would almost exclusively identify as the Democratic candidate for mayor, and raise vague promises about “fighting corruption.” The more progressive aspects of the campaign were de-emphasised. While there is no question that both sides of the aisle have issues with the way Richard Irvin has given untold amounts of Aurora’s money to businesses owned by his friends and relatives, what was needed in this race was to speak to the needs of working people, that no one in the Aurora race seemed capable of facing up to and providing real answers, neither on questions of the pandemic or policing.

This strategy is essentially a concession to play the game by the ruling class’ rules. A key task for the left in any election campaign is turning out new voters. Reluctant or first-time voters are most likely to turnout if they see a candidate running around a clear set of bold demands, posing an alternative to the political establishment , and waging an aggressive grassroots canvassing campaign. Other campaigns, like Bernie’s or AOC’s, were able to learn this lesson. Future left working-class campaigns should learn from the mistake of the Laesch team to rely on a conservative strategy that was out of step with the demands of the campaign.

Learning From Defeats and Building a New Fightback

Because of the objective barriers in local politics, including impossibly low turnout, low visibility, and the timing of non-partisan elections happening six months after the presidential election, John Laesch ended up losing in Aurora, coming in third. The challenges for working people to find an echo in a rigged system are immense. The establishment took full advantage of the low turnout, and conservative candidates swept not just Aurora, but elections up and down the Fox Valley at the city and township level.

What was needed in this race was for the Laesch campaign to go much further in directly reaching out to working-class people. With a bold, movement-building approach, by going into working-class neighborhoods and apartment complexes and knocking on every door, they could have registered people to vote months in advance in an effort to raise voter turnout. John Laesch could’ve been in the streets last summer marching for Black Lives Matter, making the connection between his race in the spring and the immediate struggle for racial justice.

Going forward, John Laesch still has a role to play in the working-class movement in Aurora. With reports of atrocities committed by one officer beginning to surface, the movement to bring the police into community control could re-emerge this summer. John Laesch and his new organization, People for Aurora, remain best positioned to put forward a clear political program for the movement, and lead a decisive struggle that could win real gains. Victories in small cities across the U.S. on issues of policing, climate, and housing could point the way forward for the bigger cities and nationally. Fox Valley Socialist Alternative will work in this movement every step of the way, putting forward a class-struggle approach and a socialist program for the struggle. We have a world to win!