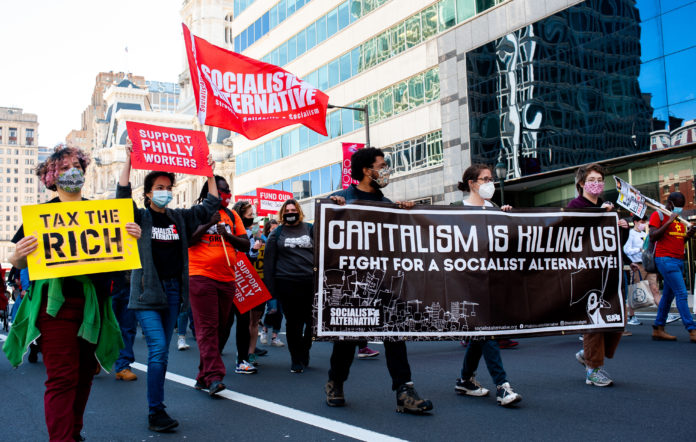 Capitalism is killing us: it’s destroying our health, our happiness, and our planet. It created the crises of the past year and then profited off of them, with U.S. billionaires pocketing an additional $1.2 trillion during the pandemic while millions got sick, lost their jobs, lost their homes, and went hungry.

The hoarding of vaccines by wealthy countries has created a “vaccine apartheid” that is devastating the neocolonial world. While it may seem hard to think of a more naked example of the cruelty of capitalism than cutting off vaccine access to billions of people to protect the profits of pharmaceutical corporations, approximately nine million people die from hunger every year even though enough food is produced to feed the world 1.5 times over.

Already, over 3.5 million people have died from the coronavirus pandemic worldwide, and according to new studies the real count could be dramatically higher at an estimated 7 million deaths. The pandemic has underscored something that’s common sense to the majority of Americans who support Medicare for All — for-profit healthcare is making us sick.

While many of us have spent the past year focusing on the global health crisis, another global crisis has continued to play out. 2020 closed out the hottest decade on record. We’re already seeing some of the devastating impacts of climate change, including a new normal of unnatural natural disasters: supercharged hurricanes, choking wildfires, powerful flash floods, and more.

With just 100 corporations responsible for over 70% of global climate emissions, the solution to impending climate catastrophe is not individual lifestyle choices, population control, or nihilism. It is the same as the solution to our failing healthcare system, our housing crisis, and our ever-growing inequality: socialism.

In a socialist society, instead of a small minority of capitalists dictating the economy, decisions would be made democratically by working people. This does not just mean voting every few years for candidates representing one of the two parties of big business, but democratically planning the economy and society as a whole to benefit the needs of the many, not the profits of a few.

Due to the sheer scale of the historic COVID crisis, the political establishment was forced to cough up unemployment benefits and modest direct stimulus checks. The situation has now seesawed, with job openings at a 20 year high as low-wage workers realize that they no longer have to settle for crumbs. Due to the illogical, chaotic nature of the capitalist system, at the same time that unemployment soared to record highs, overwork is literally killing us, with an estimated three quarters of a million people dying each year due to overwork.

Socialism would not just redistribute the existing wealth on our massively unequal planet. A socialist society would guarantee employment for all those able to work, shortening the work week with no loss in pay or benefits. Getting rid of the wasteful, unnecessary sectors which exist solely for the benefit of capitalism, from advertising to the military industrial complex, and implementing wide-scale planning, cooperation, and automation would make it possible for humanity to meet the challenges of the future.

Under socialism, housing, food, healthcare, and education would be guaranteed for all. But as the saying goes, we fight for not just bread, but roses too. Capitalism is making us miserable. We are forced to work long hours at terrible jobs and endure extreme stress. Capitalism has created a mental health crisis so extreme that suicide has risen to the 2nd leading cause of death for Americans aged 10-34. A socialist society would not only provide free, accessible mental health services for all, but it would also address the capitalist roots of the crisis, replacing the alienation, precarity, and isolation of capitalism with democratic control, stability, and working-class solidarity.

The Fight for Socialism

Capitalism uses racism, sexism, transphobia, xenophobia, and other forms of oppression as tools to divide working people, but the most powerful force in society is an organized, unified working class. As teachers, nurses, tech workers, grocery store clerks, logistics workers, construction workers, etc, we are the only ones capable of shutting down and transforming society, because we are the ones that make society run.

While socialist forces are growing, they are small. But as a new generation comes of age in an era where capitalism’s rotten nature becomes ever more clear, powerful mass movements can win huge changes in society. This will inevitably lead many more to draw socialist and revolutionary conclusions.

In Socialist Alternative, we used our experience in labor organizing to support the union drive at an Amazon warehouse in Bessemer, Alabama, sending our members from across the country who spent months on the ground working with leading workers and union organizers. During the George Floyd uprising last summer, our members in the Amalgamated Transit Union in Minneapolis refused to transport arrested protesters, providing an example of the role the labor movement can play in the fight against racism.

In Seattle, we have gone head to head with the corporate Goliath Amazon and won — twice — with a re-election victory for Socialist Alternative City Councilmember Kshama Sawant despite Amazon’s record-breaking $1.5 million spending, and a subsequent victory to Tax Amazon. We are now embroiled in a battle to defend Kshama’s seat and the right to protest against a right-wing, billionaire-backed Recall Campaign.

As hundreds of thousands of Palestinians across Israel and occupied territories mounted a general strike, the largest unified demonstration in many years, we are proud to stand in political solidarity, as part of International Socialist Alternative (ISA), with our sister organization in Israel/Palestine that consistently fights against capitalism and for liberation from national oppression.

To fight a global capitalist system, we need revolutionary internationalism, and the ISA is a global fighting organization with a presence in over 30 countries and on all continents. Join us.