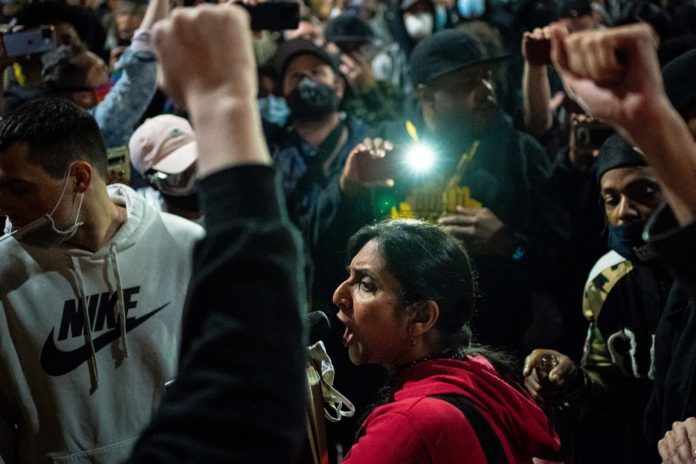 On April 1, in a major development in the recall effort against Seattle City Councilmember and Socialist Alternative member Kshama Sawant, the Washington Supreme Court sided with the right-wing recall campaign. The court’s decision to uphold the recall charges functions as the final stamp of approval for the recall campaign to move forward with its signature collection to get a recall vote on an upcoming ballot. This ruling is politically charged and completely unjust. In essence, it is a bald attempt to criminalize protest, which sets an incredibly dangerous precedent.

Big business and the right wing are attempting to remove Kshama for her role in leading movements to win historic victories for working people and marginalized communities. Kshama spearheaded the successful fights to make Seattle the first major city to pass a $15 minimum wage, the first-in-the-nation ban on teargas, rubber bullets, and other “crowd control weapons,” landmark renters’ rights laws like tenant right to counsel, and the Amazon Tax to fund affordable housing and Green New Deal programs. It’s precisely because Councilmember Sawant has fought consistently and unambiguously for working and oppressed people throughout her seven years in office that the billionaires, the right wing, and the political establishment want to remove her by any means necessary.

All three of the charges upheld by the Supreme Court attack Kshama for supporting protest movements – the Black Lives Matter and Tax Amazon movements – which is exactly what Seattle voters elected her to do.

The first recall charge attacks Kshama for attending a protest in the neighborhood where Mayor Jenny Durkan lives, at the invitation of families of the victims of police violence. The march was organized in response to the brutal crackdown against protesters during the BLM movement overseen by Durkan, and lack of justice for the 28 people killed by Seattle police since 2011. Kshama did not “lead” the protest, as is dishonestly claimed, but spoke there in solidarity.

The second charge falsely claims that Kshama broke the law when she helped to organize a masked, hour-long Black Lives Matter rally at Seattle City Hall during last summer’s historic movement. This rally set the stage for passing the first-in-nation ban on tear gas and other “crowd-control weapons” the following week. Stunningly, the court ruled on the basis that this anti-racist rally was “not city business.”

Finally, the third recall charge relates to Kshama’s leadership in building the fight for the historic Amazon Tax. The recall campaign alleges that Kshama improperly used city resources by co-hosting a mass democratic Tax Amazon meeting in January which discussed, among other things, launching a ballot initiative to tax big business. Tax Amazon didn’t file the initiative until two months later and ultimately the question never even went to the ballot because the movement created enough pressure to force the city council to pass legislation in July 2020. This ruling sets an extremely dangerous precedent and effectively criminalizes the act of elected representatives helping to build movements.

The recall campaign, in putting forward these charges, falsely claims that all of these actions that Kshama took to help build the Black Lives Matter and Tax Amazon movements were illegal. In an overtly racist attack on the movement, the recall has also claimed that Kshama’s support for BLM “promoted lawlessness.” Kshama has not broken any laws, but Washington state’s recall law does not require that the charges even be proven true. It also never allowed Kshama to defend herself in court against the dishonest charges.

Building movements and speaking at protests aren’t crimes, but the powers that be want to change that, including by attempting to drive the most progressive elected official in the country out of office. At the same time, 81 bills have been introduced across the country attempting to criminalize protest.

While the court’s decision is totally unjust, it should come as no surprise. As with the police, the legal system under capitalism has always been used by the capitalist class to retain their power. Laws under capitalism are written by and for the very wealthy, and enforced on a political basis. To the extent that the law ever favors the interests of working people, it is the result of organized struggle to better our conditions.

We see this reality on full display when looking at the way that, by and large, victims of police brutality never see justice under the legal system. George Floyd’s murderer Derek Chauvin was just found guilty on all charges brought against him because of the biggest protest movement in U.S. history. Without the pressure of a mass movement, the political establishment likely would have acquitted Chauvin to maintain their narrative that he’s just one “bad apple” rather than a symptom of a deeply racist system.

The Supreme Court’s ruling in favor of the recall campaign sets a dangerous precedent because it is an attack on the vital right to protest. If this recall is successful, it will open the floodgates for increased repression of our movements.

It’s no coincidence that this recall comes as a brewing era of revolt is beginning to emerge worldwide. In response to the deepening crisis of capitalism, working people are getting organized. Last year the world ignited in anger at the brutal murder of George Floyd and protesters across over 60 countries on all seven continents took to the streets to demand an end to racist police brutality. In recent years we’ve seen struggles against austerity, repression, gender violence, climate change, and much more explode across countries including Chile, India, Lebanon, Hong Kong, Ecuador, Russia and Myanmar, and countless other places.

Workers here in the U.S. are beginning to rebuild a labor movement that was systematically dismantled decades ago. Amazon workers in Bessemer, Alabama just boldly attempted to unionize a warehouse owned by the richest man in the world! In this context, the billionaires and the right are desperate to squash any working-class fightback before it escalates, by recalling the nation’s only Marxist elected official and opening the door for increased repression of our movements.

It’s critical that working people, not just in Seattle but nationally, take a stand and join the movement to defend Kshama Sawant from this right-wing recall. As workers are seeking out  solutions to the misery imposed by the COVID-19 crisis, the recession, climate change, and so many other problems that are created by the capitalist system, we cannot afford to lose one of the most effective fighters in the struggle for a better world.

As we saw in the fight to re-elect Kshama Sawant in 2019, the wealthy elite are again throwing in their immense financial support to unseat the socialist. Corporate donors broke local fundraising records in 2019 by flooding the Seattle elections with over $4 million in PAC money, with $1 million coming from Amazon alone in a single day. The recall campaign relies on steady support from ultra-rich donors, including from members of three of the five Washington State billionaire “dynasties” identified by Forbes magazine.

We’ll never out-spend the billionaires, but we can defeat their attempts to remove Kshama by building a powerful grassroots campaign, just like we did when we re-elected Kshama in 2019. Our movements can stand toe-to-toe with the billionaires and win because when working people get together, we outnumber the rich and the powerful. When we get organized, we can overcome the PAC money, the corporate media attacks, the paid canvassers, and the lies. One incredibly important way to build our movement is to donate to the Kshama Solidarity Campaign to help ensure that we reach voters across Kshama’s district. Donate online today at www.kshamasolidarity.org/donate!