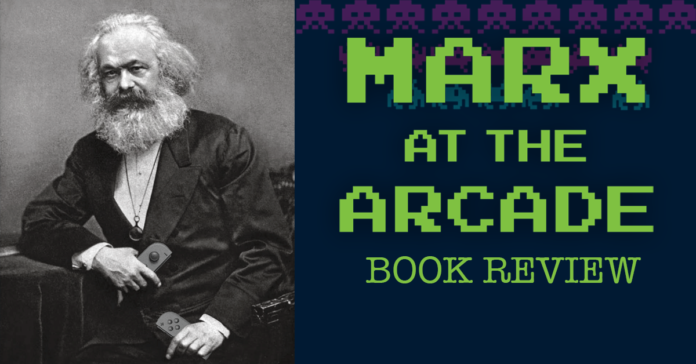 Video games can be light entertainment or serious art, but they’re also big business. 2013’s Grand Theft Auto V currently stands as the most financially successful entertainment product in history. In recent years, the video game industry has come under increasing scrutiny for its predatory monetization practices and atrocious workplace conditions. Ubisoft faced a major scandal for its large-scale cover-up of workplace sexual harassment. Several companies have come under fire for their extensive crunch periods. In response, video game workers are making their first attempts at unionization.

These circumstances lend particular relevance to books like Jamie Woodcock’s Marx at the Arcade: Consoles, Controllers, and Class Struggle. Woodcock is a researcher at Oxford University who has previously written about call center work and the gig economy through a Marxist lens. And he’s a gamer. Written in 2019, Marx at the Arcade looks at the political economy of the video game industry and its cultural impact. Woodcock argues “that Marxists should be interested in videogames . . . and that videogame players can benefit from adopting a Marxist analysis.”

Woodcock’s goal is laudable, but his execution is inconsistent. His genuine Marxist insights in uncovering the social relations in the video game industry are constantly at war with obscurantist distortions of Marxism coming from his academic background. An understanding of the video game industry, however, can be aided by separating Woodcock’s insights from these distortions.

The first half of Woodcock’s book examines the actual labor processes behind making video games. When sitting down to play a video game, “rarely do we consider the labor and logistics that bring us to this moment” (p. 44). Considering this labor and logistics is precisely what makes Marxism’s materialist approach so valuable.

Woodcock describes the labor processes across the supply chain that bring video games into existence: from the Chinese factory workers manufacturing consoles, to the retail workers selling the games, to the janitors cleaning developers’ offices. This is coupled with the labor involved in actually designing, programming, and testing video games. All this labor is carried out under capitalist relations and involves ruthless exploitation.

Non-Disclosure Agreements (NDAs) and blacklists against hostile journalists hide the extent of the exploitation. But Woodcock provides a damning indictment of the industry. While video game work is often portrayed as a “dream come to life,” Woodcock reveals that the industry is heavily Taylorized, with jobs partitioned into highly specialized roles analogous to a factory assembly line. The industry is rife with massive over-work and low job security. Nominally permanent employees are routinely laid off once a game is done and forced to re-apply for work when development starts for a new game. During intense crunch periods when a game is being worked on, employees are pressured into 85-hour work weeks without overtime or compensation.

Industry apologists defend crunch as necessary to provide the high-quality games that consumers demand. But Woodcock points to studies showing that crunch actually makes video games worse. Here Woodcock shows the value of a Marxist framework, with its understanding of capitalism’s drive to maximize absolute surplus value. “In view of this framework,” he argues, “it is clear that crunch is therefore a deliberate managerial strategy, not some sort of mistake or aberration.”

While Woodcock provides important insights into the workings of the video game industry, he undermines his own contributions when he deviates from Marxism’s materialist approach. He comes from a tradition called “autonomist Marxism,” relying on the work of Nick Dyer-Whiteford, a professor of information and media studies at the University of Western Ontario. “Autonomist Marxism” is known for its impenetrable jargon, as well as its acceptance of neoliberal propaganda about the alleged obsolescence of workplace struggles. Dyer-Whiteford argues that, in the post-Fordist era, the traditional Marxist struggle between labor and capital is now “represented as a conflict between communication and information… Information is centralized, vertical and hierarchic; communication is distributed, transverse, dialogic” (Nick Dyer-Whiteford, Cyber-Marx, p. 86).

Woodcock is more grounded in reality than Dyer-Whiteford, but the influence shows. He claims video game work is something called “immaterial labor,” which makes video game workers part of something called the “cyber-proletariat” or the “cognitariat,” which is apparently part of “cognitive capitalism.” He doesn’t define any of these terms. The implication is that there’s something fundamentally “immaterial” about technology that sets tech workers apart from the rest of the working class. He even implies this unites tech workers with their managers, who Woodcock also describes as engaging in “immaterial labor.” This only obscures the class relations Woodcock is trying to expose.

The notion that tech work is “immaterial” has less to do with Marxism and more to do with neoliberal propaganda. Treating information like some immaterial entity living in a magic cloud makes it harder for people to “consider the labor and logistics” that brings technology into existence. “Autonomist Marxists” may try to give these ideas radical spin, but Woodcock’s own research points in the opposite direction, revealing video game workers as every bit as material as the rest of the working class. Video game workers face exploitative conditions entirely relatable to other sectors of the workforce. Workers at Amazon and Starbucks face intense productivity metrics and overwork comparable to crunch in the video game industry. Artificially separating video game workers as a distinct “immaterial labor” hides those commonalities.

Even more problematic are the references to “anti-work.” This comes from the “autonomist Marxist” approach that places more value on envisioning life beyond work than on actually engaging in workplace struggles, because the latter allegedly reinforce the wage-slave ideology. The idea of freeing yourself from work can have a certain appeal to people beaten down by capitalism, but actually changing things requires fighting as workers. In practice, “anti-work” ideas are useless in challenging exploitation and can even be used to justify it. Capitalists, especially in the video game industry, use anti-work ideas to paper over their abusive practices. For instance, Microsoft executive Alex St. John famously defended crunch culture by insisting that “making games is not a job—it’s an art,” while accusing opponents of adopting a “wage-slave attitude.” Woodcock naïvely sees anti-work ideas as radical and often finds himself highly under-critical of certain corporations.

For instance he praises Atari because it “promised ‘play as work’ as an alternative to the restrictive conditions of industrial or office-based Fordism” and insists they only went bad when they “sold out to the decidedly non-anti-work Warner Communications” (p. 31). Elsewhere he holds up the example of people who make a living streaming video games on Twitch, a subsidiary of Amazon, as “the anti-work appropriation of gamification on workers’ terms” (p. 165).

Woodcock’s book is constantly at war with itself. Through his journalistic work he lifts the veil of the video game industry exposing the hidden class relations. But, once he starts citing his favorite academics, he pulls the veil back down again.

The second half of the book is strongest, as Woodcock shifts his focus to cultural criticism. He relies more here on the Trotskyist Terry Eagleton than on Dyer-Whiteford. He looks at how the socio-political circumstances of video games’ development influences their artistic content. This includes the explicit political influence coming from military funding in the first-person shooter market. It also includes the implicit biases that appear when developing supposedly neutral systems for RPGs and simulation games, like how Sid Meier’s Civilization games bake a pro-capitalist worldview into their game design.

The question of political influence in video games became especially important in 2014, when the right-wing #GamerGate movement broke out, harassing feminist comentators for supposedly “forcing politics into video games.” Woodcock points out that “whether or not videogames were deliberately gendered . . . the general sexism in society still operated in the production process” (p. 171). He also draws attention to the connection between #GamerGate and the alt-right. In particular the figure of Steve Bannon who built a career out of hiring people to grind for in-game currency in World of Warcraft which he then sold to others.

Most importantly, he links his cultural criticism back to the role of labor in the video game industry. This connection has strengthened since the book was published, as the sexual harassment scandal at Ubisoft revealed the interlinking of institutional sexism and workplace abuse. In Woodcock’s discussions with video game workers, he discovered that fighting institutional sexism in the industry was a significant motive behind organizing drives, not just crunch. This parallels developments outside of the video game industry, such as fast food and hospitality, where workers have used strike action to fight against sexism.

The video game industry, like the tech industry in general, is almost entirely non-union, which helps the industry get away with its abusive practices. But workers are starting to organize and Woodcock documents those developments. In 2016, video game voice actors went on strike, organized under SAG-AFTRA. In 2018, there was a strike at the French video game studio Eugen System, organized under the “Syndicat des Travailleurs de Jeu Vidéo” (STJV). Both of these unions covered broader sections of the workforce – actors and French tech workers, respectively – that had overlap in the video game industry. Since the book was written, there has also been a successful strike of visual novel writers at Voltage.

These early steps show the potential to organize the video game industry as a whole. Woodcock highlights the example of Game Workers Unite (GWU), which began when the 2018 Game Developers Conference (GDC), the world’s largest professional games industry event, held an anti-union panel. The group formed as pro-union developers organized to disrupt the panel and publicly expose the anti-union propaganda. Since then GWU has made inroads into becoming more of a proper union, although it’s still in the early stages.

Unfortunately Woodcock, still held back by his academic upbringing, over-emphasizes what he calls “the method of workers’ inquiry.” This references Marx’s attempts in 1880 to survey the French working class about their workplace conditions, since the French bourgeoisie refused to conduct anything analogous to the British factory reports Marx used in his research for Capital. But Woodcock presents it as if surveying workers is the defining feature of Marxism, when in fact real Marxism is a guide to action. So when Woodcock discusses the unionization attempts in the video game industry, he doesn’t rely on the rich history of the labor movement to understand how unorganized workers can become organized. Instead he draws attention to the geeky T-shirts worn at GWU meetings to highlight the allegedly unique context in which video game workers operate.

The results of Woodcock’s “workers’ inquiries” nonetheless reveal an industry ripe for unionization. Behind all the academic jargon, we see a ruthlessly exploitive industry with a toxic work environment that spills out into the culture around it. And we see a proletariat, no “cyber” prefix necessary, eager to fight back.