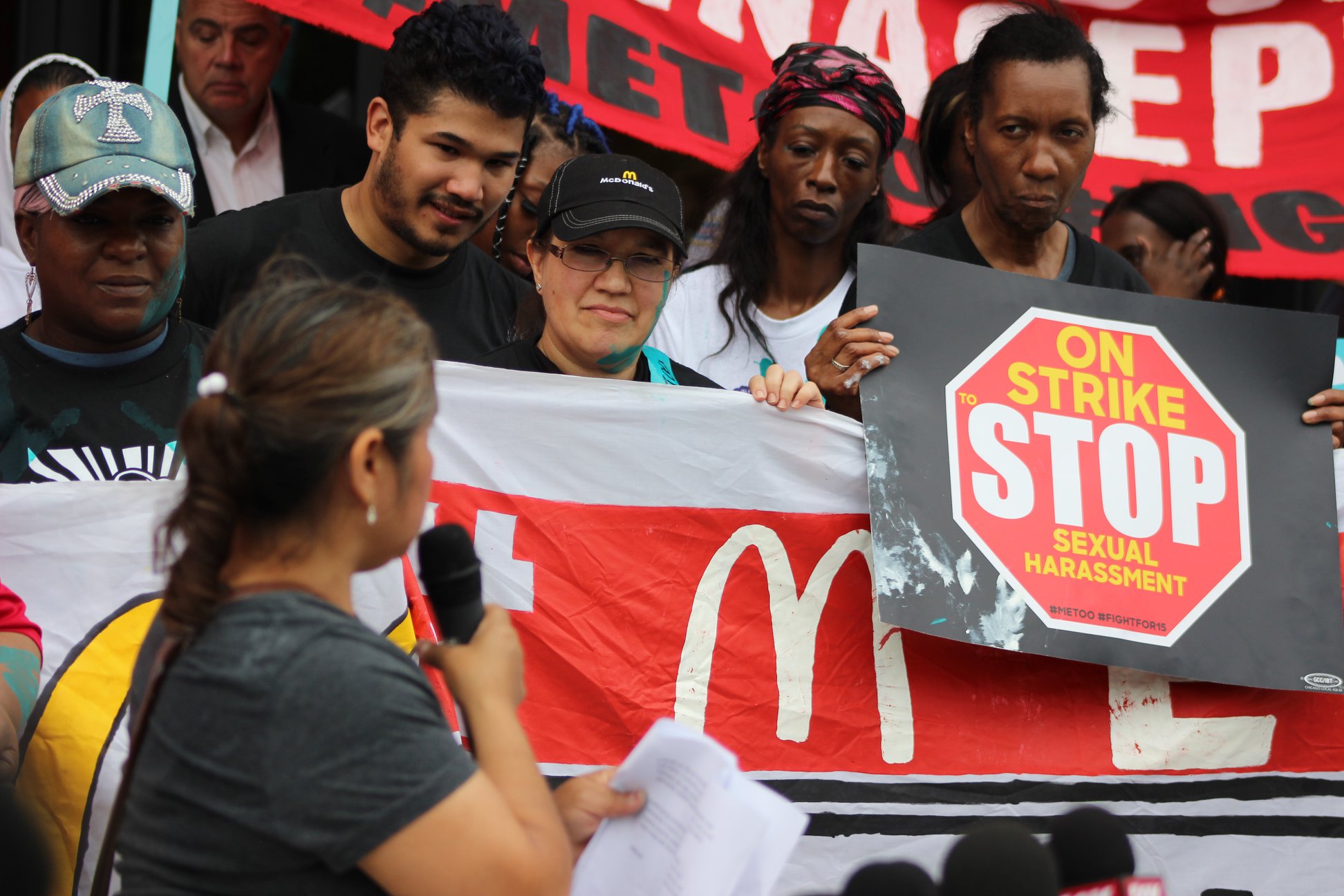 On September 18, 2018, McDonald’s workers, who have also been fighting for $15 an hour, went on strike against sexual harassment in 10 cities across the U.S. including Chicago, San Francisco, L.A., and New Orleans. This walkout, backed by the Service Employees International Union (SEIU),  is historic as the first ever nation-wide strike explicitly against sexual harassment. Building on the #MeToo phenomenon from the past year, it was led not by the super elites of Hollywood or D.C., but working class women, and especially women of color.

Back in May, ten McDonald’s employees, after multiple incidents of sexual harassment, bravely spoke up and filed a federal complaint against the company and their unwillingness to address issues of sexism and sexual harassment. But after months and months, nothing was done to address the problem, so workers decided to walk off the job to force the company to take their complaints seriously. Hundreds of workers participated in the powerful lunch-hour walkout.

With home-made signs displaying slogans like “Time’s up Clown,” “sexual harassment: not lovin it,” and “1 big mac, extra cheese, hold the sexual harassment,” McDonald’s workers showed the company that they must pay more than lip service to issues of sexual harassment in their restaurants.

McDonald’s has responded by saying they will be “partnering with Rape, Abuse and Incest National Network, RAINN, and the legal-compliance firm Seyfarth Shaw at Work” to address the demands by their workers. Seyfarth Shaw is the firm that has been contracted to defend Harvey Weinstein from prosecution. Quite rightly, workers also demand that McDonald’s drops relations with this firm. The company’s response shows that ultimately we can only rely on organized and activated workers, not management that just want to avoid legal battles, to stop sexual harassment.

Fast food workers organized by SEIU were at the forefront of the fight for a $15 minimum wage several years ago that led to victories in Seattle, Minneapolis, and other cities. This time the workers organizing this McDonald’s strike are taking action as part of an existing movement, not only against sexual harassment but also a broader resurgence in the labor movement. Starting with the 2016 elections and Trump’s inauguration, an upsurge of radical political and strike action started in sectors of labor traditionally dominated by women.

Who’s been lifting labor back up? Teachers, nurses, hotel workers, and now fast-food workers. National Nurses United (NNU) didn’t just endorse Bernie Sanders but rank and file members organized themselves energetically for his campaign. And recently, NNU became the first union to openly oppose Brett Kavanaugh in a public letter. This past spring the West Virginia teachers set off a wave of teacher strikes across the country, exposing the reality of teachers holding three jobs to stay a float, and being crippled by student debt and health-care premiums. In an industry notorious for sexual harassment, hospitality workers rose up and won panic buttons for housekeeping staff that experience harassment and assault from guests.

#MeToo gained its biggest audience highlighting the horrific treatment of women in the wealthier sectors of society, bringing down powerful men in politics and entertainment. But the McDonald’s strike reminds us that it’s time for #MeToo to hit the streets, our classrooms, and our workplaces, in solidarity with low-wage women and trans* workers, the most likely to experience sexual harassment at work.

Ordinary people cannot rely on the same huge public platform famous actors have to support them in standing up to harassment. For working people, a strong union willing to back them up with legal fees and protection from retaliation makes coming forward more possible. Before #MeToo, in the case of French politician Dominique Strauss Kahn’s assault of hotel worker Nafissatou Diallo, it was her union membership that allowed her to pursue a case against him and win.

Although most workers in the U.S. are non-unionized, interest in unions has increased tremendously. Existing unions should boldly take up this opportunity so that no woman has to be afraid of retaliation from their boss. The fight against sexism and sexual harassment in the workplace needs the combined strength of public campaigns by labor, emerging independent political organizations like DSA, and women’s organizations at the federal, state, and local levels. The McDonald’s strike, as well as strikes by teachers and hotel workers, are an exciting step in this direction.