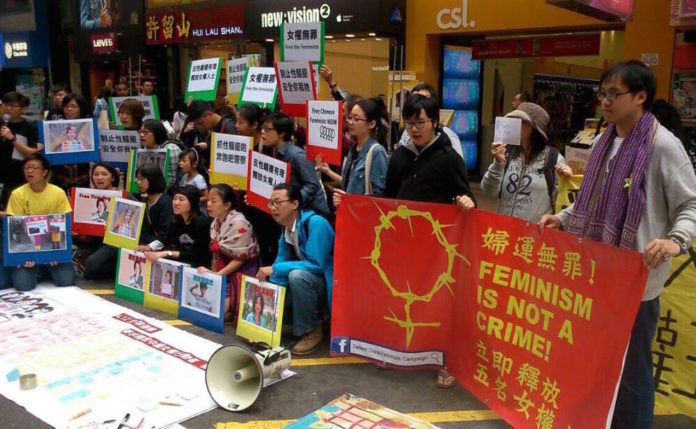 Declaration by Solidarity Against Repression in China and Hong Kong

Women’s rights activists in China are again under attack. The Chinese dictatorship (CCP) feels threatened by growing radicalization among women, part of a wider trend of radicalization in society and among young people.

The attacks follow a similar pattern. Firstly, feminists are being viciously hounded by nationalistic pro-CCP internet trolls in a coordinated campaign. A wave of hysterical online anti-feminism is being encouraged by the state. Secondly, the social media accounts and group pages of prominent spokeswomen are being shut down. They are vilified as enemies of the state and then silenced!

At the end of March an attack took place in a restaurant in the southwestern city of Chengdu. Two women were assaulted by a male diner after they complained about his smoking. The enraged smoker threw hot liquid over the two women who captured the attack on video and posted it on Weibo, China’s equivalent of Twitter. His remark that, “men who do not smoke are not real men,” didn’t help his case.

The two women were Xiao Meili and Zheng Churan, who are well known feminist activists. Zheng was one of the Feminist Five, who were arrested and detained for one month on the eve of International Women’s Day (March 8) in 2015. ISA in Hong Kong organized protest actions to demand the release of the five, as part of a global defense campaign.

Xiao’s post about the Chengdu restaurant assault went viral on the internet, drawing overwhelmingly supportive comments including from some official government-linked accounts. The following day the Weibo account of a prominent nationalist group launched an attack on the women, posting “historic” photos of Xiao from 2014 in which she expressed solidarity with the Hong Kong Umbrella Movement. The trolls claimed inaccurately that she supported “Hong Kong independence” (that is not what the Umbrella Movement was about, but this label is used by Chinese nationalists to attack anyone who supports or shows sympathy with the democracy struggle in Hong Kong). A deluge of online attacks followed (in China this can involve 100,000s or millions of posts).

Zheng was shown in another old photo wearing a yellow ribbon, a symbol of the Hong Kong democracy protests. She was accused of being a “Taiwan independence supporter” (another taboo topic under CCP rule). The two women and other feminists were subjected to violent threats and accusations like “xenocentric”, “anti-China”, and “CIA spy”. Shortly afterwards, Xiao’s Weibo account was closed down by the company, which caused celebrations by the trolling machine.

The attacks fit a familiar pattern combining misogyny with nationalism. The right wing nationalist forces behind these trolling attacks are de facto auxiliaries of the CCP-state and enjoy its protection. Their core issues are nationalism, but also social conservatism — hence feminism is anathema. They accuse feminists of being “corrupted” by foreign values. Everything is a plot by the West to destroy China. The nationalists support dictatorship, a strong China (imperialism), and Han supremacy. They incite racism against minorities like Muslims. Some of these layers are developing towards fascism. In addition to this “unofficial” online army, the CCP-state directly employs two million full time internet police and 20 million part timers.

More than 20 accounts of feminists and women’s rights groups have since been shuttered by Weibo with the explanation that their content is “harmful”, “illegal” or could “incite antagonism”. “We were collectively silenced by an internet-wide crackdown that hit like a tsunami,” one of the women told CNN. It is clear that the CCP-state is behind this crackdown. The question is why?

In a separate but connected development, more than ten feminist groups were removed from Douban, another online platform. Douban is a book and movie review site that serves as a message board for different groups of mostly young people. One of the feminist discussion groups shut down in this crackdown had 40,000 members.

The groups targeted were mainly adherents of radical “6B4T” culture, still very much a fringe layer within the growing tide of Chinese feminism, which advocates a boycott or “strike” from relationships with men, marriage, and having children. The “6B4T” movement began in South Korea — like China, a Confucian society, where capitalism is deeply patriarchal and the oppression of women assumes stark forms.

That the message of “6B4T” would attract a layer of mainly young women followers in China is actually not hard to comprehend under such a hardline totalitarian capitalist regime, where no form of collective protest, organization, or politics is allowed and many sections of society feel an acute sense of powerlessness. The CCP has resurrected many patriarchal control structures that partly disappeared or were pushed into the background during the revolutionary era of the 1950s-70s, before capitalist restoration began.

Today’s CCP views increased rights for women as an obstacle to its rule and its great power mission. This dynamic is reinforced as the Cold War with US imperialism intensifies. Rather than open up and become more democratic, and more tolerant of various protest currents, Xi’s regime continues to become more and more repressive. The regime’s attitude towards the nascent women’s movement and feminist consciousness is conflicted. This has become a major trend reflected in the attention garnered by China’s own #MeToo movement, despite the authorities’ attempts to limit it. The latest example is the dismissal, on April 15, of an associate professor at Wuhan University who sexually harassed at least 18 female students. The case has attracted nationwide attention on social media because the women stood up against their abuser and refused to let the issue be covered up.

The regime is afraid to directly launch a sweeping crackdown with arrests and mass persecution of feminists because this would bring it into collision with a very sizable layer of public opinion, which is dissatisfied with women’s conditions today. But at the same time the CCP fears the growing support for feminism, as it fears all social processes outside its control. Even when a movement is not an organized force, as it was not in Hong Kong in 2019, once ideas enter the mass consciousness they become a threat to any ruling elite, as in this case with the Chinese dictatorship.

Another key factor that explains the attacks on China’s feminists is the catastrophic fall in China’s birth rate, which is the lowest since 1949 and fell by a further 15 percent last year. The number of births could slip below 10 million annually in the next five years according to Dong Yuzheng, director at the Guangdong Academy of Population Development. This compares to 25 million births in 1987 (seven years after the one-child limit was imposed).

China’s population is entering a phase of decline, which becomes even more troublesome for Xi Jinping in the context of historic US-China rivalry. The size of the work force in the “world’s factory” has fallen for eight straight years. The causes of China’s demographic malaise are complex, partly a legacy of the one-child policy, which was lifted in 2016 without however reversing the decline in births. This is even more due to the punitive cost of having a child in China, with education, housing and healthcare all extremely expensive.

Having re-adopted an out-dated Confucian outlook, Xi’s regime promotes heterosexual marriage and “family harmony” as an important control unit to assure political and social “stability”. Accordingly, women — much like non-Han national minorities and democracy-hungry Hong Kongers — must be controlled. The CCP, when it was a revolutionary force, was militantly anti-Confucian, an ideology that stresses obedience to authority, of citizens to the government, and women to men. The restoration of brutal capitalism in China has undermined the position of women at work and school and revived even pre-capitalist reactionary ideas and social structures.

Young people in China live high pressure, financially precarious lifestyles, with soaring household debt levels especially linked to the cost of housing. This is becoming an ever bigger disincentive to marrying and having children. According to official statistics the number getting married dropped 41 per cent to 13.9 million in 2019 from 23.8 million in 2013. The legacy of the one-child policy, and the illegal but widespread practice of gender-selective abortions, has resulted in men outnumbering women by 30 million. Trafficking of imported “brides” to China from poorer countries such as Myanmar, Cambodia, and even Ukraine, now number thousands every year. In recent years the regime is also looking at more aggressive campaigns to convince women to have more babies.

The government is planning a pension reform as part of the latest five-year plan (2021–25) which will confer “equality” by raising women’s retirement age by five years (confiscating earned pension entitlements). Last year it adopted a new divorce law, which imposes a compulsory 30-day “cooling off” period — a policy widely criticized by feminists and the left. The policy makes divorce more difficult because if one party decides to back out during the 30-day period, the process must start again with a new application.

At the time of writing the blocking of the feminist platforms continues. The nationalist witch-hunt against feminism is not subsiding. Some even speculate this campaign can have another motive: That Xi’s regime wants to divert attention as he tries to defuse tensions with the US (not a popular step among Chinese nationalists).

The attacks on feminist social media accounts has attracted large-scale attention. Xianzi, a high-profile feminist who filed a sexual assault case in 2018 against a television celebrity, declared her solidarity with the sisters of Douban. The hashtag “Women Unite” in protest at the closures sprang up on Weibo and was viewed 50 million times.

The suppression of feminist groupings is also a warning that Xi’s regime is moving to widen its crackdown on all potential opposition layers. This can lead to new attacks on workers’ struggles, on leftist youth, ethnic minorities, investigative journalists, and others. For Xi, next year’s 20th CCP Congress, and his coronation for a historic third term (he hopes for more), are the overriding priorities and his fear of social and political unrest grows even bigger. The linking together of women’s struggle, and the defense of ethnic minority rights, with the building of an independent workers’ movement is the key to changing the situation. Not as “single issues” but as a united movement of the oppressed against capitalism, patriarchy and totalitarianism.

Solidarity Against Repression in China and Hong Kong and International Socialist Alternative protests the attacks against feminists in China. We urge our supporters and readers to take action. Share this article widely and translate it, especially to alert the women’s movement in your country. Please also show your support with pictures and videos using these placards, which you can download here.