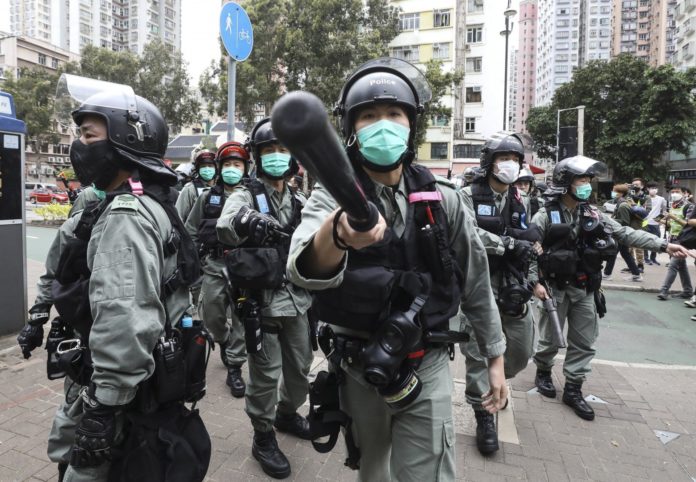 In June 2020 Xi Jinping imposed a national security law in Hong Kong with draconian penalties. Charges of “subversion” and “separatism” can be punished by life imprisonment or even extradition to the mainland where the death penalty still applies for such offenses. Xi’s regime is simultaneously presiding over the most severe crackdown in China since the Tiananmen Square protests of 1989.

A crucial part of this solidarity work is to highlight the case of Hong Kong’s imprisoned former legislator “Long Hair” Leung Kwok-hung. Along with forty other candidates for the city’s now disbanded Legislative Council (LegCo) he is being held in prison charged with subversion under the dictatorship’s national security law.

“Long Hair” is the only representative of the left among the most prominent leaders of the democracy movement. He has actively supported workers’ causes in China, Hong Kong, and internationally. He has also supported women’s, LGBTQ, and refugee rights, and opposed U.S. imperialism.

On the mainland, the campaign has taken up the cause of feminists, such as Xiao Meili and Zheng Churan, who have been hounded by pro-CCP internet trolls. While the CCP regime has allowed the right-wing, misogynist harassment campaign to go unchallenged, the feminists have had their Weibo (China’s equivalent of Twitter) accounts suspended. This case highlights both the growing radicalization in Chinese society and the Xi regime’s moves to widen its crackdown on all potential opposition.

In the coming months Solidarity Against Repression in China and Hong Kong plans to coordinate a series of online meetings around the world. They’re in the process of producing a pack with leaflets, model trade union resolutions, and other campaign tools to build for solidarity actions.

The campaign seeks to build awareness of what’s really happening in Hong Kong. This is based on our interaction with workers, young socialists, and activists in China and Hong Kong. The campaign will fight for freedom for all political prisoners, but will draw attention to those who fight for workers’ rights and link the democratic struggle to a fight against capitalism and imperialism.