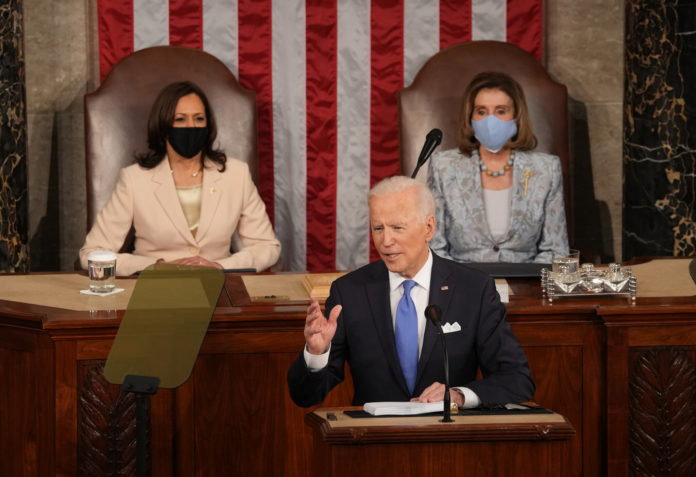 We are 100 days into Biden’s presidency and his approval rating sits at 54%. His major legislative victory, the March stimulus bill, had over 60% approval among ordinary people, including widespread support among Republican voters. Suffice it to say Biden has created a nice honeymoon for himself and has won the favor of millions of working-class people who finally see the government “working.”

Is this the same Biden who, on the campaign trail, soothed big business concerns by saying “nothing would fundamentally change”? The same Biden who was the architect of racist system of mass incarceration in the nineties? Who fought to slash social security in the eighties? Yes, it is most certainly the same Biden. What has changed is the scale of the crisis facing his system.

Everything that has been achieved in the first 100 days of Biden’s presidency needs to be viewed through a very specific lens: What is the ruling class willing to do to defend against total economic collapse?

Biden’s early achievements — the dramatic acceleration of vaccinations, the $1.9 trillion COVID relief bill, the introduction of the American Jobs Plan and American Families Plan — broadly represent the American ruling class throwing out the neoliberal playbook which they have relied on for forty years.

The response of the Bush administration to the Great Recession in 2008–9, which was later continued by Obama, was to bail out big banks by pumping money into the markets and keeping interest rates low while drowning the American working class in underwater mortgages and layoffs. The pivot in approach currently being carried out by Western capitalist powers is an attempt to undo the pitfalls of the 2008 strategy in the context of an even deeper crisis which was also not amenable to the same tools. If the same treatment were followed this time, we would right now be facing Great Depression–like conditions of mass destitution. This time, the ruling class had no choice but to bail out working people, not just banks and corporations.

Over the past several decades, and especially since the Great Recession, the gulf between the super rich and the working class has tremendously widened. Between 1980 and 2017 the earnings of the top 0.1% grew fifteen times faster than that of the bottom 90%. Three-quarters of jobs created since 2008 have been low-wage jobs, many of which have been lost this past year amid the ongoing COVID pandemic. Seventy-eight percent of American workers were already living paycheck to paycheck — and then the pandemic hit.

Over 20 million jobs were lost. Forty-six million Americans wiped out their emergency savings. Rental debt accumulated and alongside it, civil unrest. The dramatic Justice for George Floyd rebellions last summer was correctly seen by the ruling class as a revolt against a system that had failed us. This, alongside international upheaval in places like Belarus, Myanmar, and Lebanon, signaled the danger that widespread revolt may be on the horizon if the situation was not contained.

This is the context for Biden’s first 100 days in office.

Getting the pandemic under control was the primary task assigned to Biden when he took office, and a narrow look at the pace of vaccinations would signal that he’s succeeded in this. His administration managed at one stage to ramp up vaccinations to a pace of more than three million shots per day. This is no doubt an astonishing escalation; however, the pace of vaccinations has now slowed as health officials are finding it harder to administer shots to the hesitant. All of this in addition to the spread of dangerous variants shows that COVID is not in the rearview mirror even if the overall situation in the U.S. is improving.

The infection rate is again falling, but very slowly. The Biden administration’s view of vaccines as a silver bullet and the total de-emphasis on lockdowns or social-distancing measures has meant tens of thousands more needless deaths. Additionally, Biden’s administration seems to be ignoring the inherent danger of an “America First” approach to containing the virus. Biden has continued the Trump policy of vaccine hoarding and has done nothing to ensure equitable access to the vaccine globally. This is setting the world up for a nightmare scenario wherein new variants — some that will likely illude vaccines — are able to spread.

The biggest accomplishment of Biden’s administration thus far is the passage of his $1.9 trillion stimulus package. The package, which had widespread bipartisan support among ordinary people, gave millions of Americans a needed shot in the arm. Alongside extending the moratorium on evictions and student-debt collection, it sent thousands of dollars to working people in the form of stimulus checks, unemployment top-ups, and child tax credits. According to the Organization for Economic Cooperation and Development (OECD), this stimulus spending alone will boost world GDP by 1.1%. This is the starkest evidence to date that the ruling class has abandoned a strict neoliberal approach.

The stimulus bill, alongside pent-up demand from months of limited spending — particularly by that section of the population which kept its jobs and worked from home — will no doubt usher in a temporary economic rebound in the U.S. However, beyond an immediate cash bump, the final stimulus package contained no lasting gains for working people, contributing to the fragility of any economic rebound. The only component of the bill that would’ve had long-term consequences was the $15 minimum wage, which was willfully dropped by the establishment and not fought for by progressives.

Biden has refused to take up popular demands like student-debt cancellation or Medicare for All (or even lowering the Medicare eligibility age to 60, which he promised during the campaign). All of these demands would provide real, long-lasting benefits to working people. Rather than abolishing the archaic filibuster in order to pass a flurry of pro-worker legislation like the PRO Act, a $15 minimum wage, and Medicare for All, Biden has hid behind calls for bipartisanship.

While the Biden administration seeks to extend some components of the stimulus package like the popular child tax credit, it appears the extent of his ambition is to extend it only for two years. Similarly, despite platitudes that $15 minimum wage is not off the table, we’ve yet to see it reintroduced in any capacity.

The Next Big Moves

The Biden administration is preparing to make the climate a certain focus over the next several months as his new infrastructure bill goes to Congress (see page 3). To kick off this effort, Biden convened a global climate summit in late April, along with forty other world leaders. Diplomatic as it may have seemed, the climate summit was somewhat of a trojan horse through which Biden could reassert the authority of American capitalism on a global scale.

A main feature of the summit was the Biden administration’s assertion that domestic climate legislation would be aimed at strengthening American competitiveness. In this vein, Biden plans to continue Trump-era policies aimed at weakening the Chinese economy and incentivizing corporations to move production back to the U.S.

Another notable feature of the climate summit was Biden’s outsized emphasis on fighting authoritarianism. This is part of Biden’s “democracy offensive” aimed at undercutting Chinese power. As we wrote in early March, it’s crucial to remember that the American ruling class “are only committed to democracy, really a democracy for the rich, insofar as it serves to maintain capitalist rule inside the U.S. and as a cover for the assertion of their economic and strategic interests globally.”

Additionally, one of Biden’s stated priorities over the coming months will be the “American Families Plan,” which is billed as an overall plan to revive the social safety net in the U.S. While details of the plan have yet to be released, it appears the focus will be on childcare and education. Troublingly, it will not include desperately needed healthcare reforms.

Notably, and further evidence that the ruling class is turning its back on neoliberalism, Biden proposes paying for these new plans with taxes on the rich and corporations. Positive as it is that the rich are being asked to foot the bill, Biden’s loftiest suggestion is that the corporate tax rate be raised to 28%, which is still well below what the rate was when Trump took office. And before even reaching the steps of Congress, Biden and the rest of the establishment are already moving the goal post: they now say they’re willing to settle for just 25%.

A dramatic failure of the Biden administration in its early days has been their continuation of brutal conditions for immigrants and refugees at the southern border of the U.S. AOC has provided left cover for Biden by suggesting conditions at the border are better than they were under Trump. On a generous day this is barely true. Hundreds of minors remain crammed in cages, and more than 302,000 people have been deported just in Biden’s first 100 days. Biden has also proudly continued the Trump tradition of denying stimulus checks and COVID aid to the 10 million undocumented immigrants in the U.S.

The immense crisis facing American capitalism has forced Biden and the Democratic establishment to be much bolder in their promises to ordinary people. However, none of the Hail Marys they are currently throwing can solve the underlying rot in their system.

Short-term spending cannot resolve the mountains of personal debt people are on the hook for: as much as $70 billion in rental debt, over $80 billion in medical debt, and over $800 billion in credit card debt. It cannot resolve the tendency of capitalists to pour money into the out-of-control financial casino rather than productively invest, driving growth in low-wage, unproductive industries. It cannot resolve the mass closure of small businesses, which is accelerating even further the “Amazonization” of the economy. Nearly 100,000 businesses that closed down during the pandemic have now been shuttered entirely.

In an attempt to create some semblance of an economic rebound, the Biden administration  has massively increased the federal debt in order to deliver cash infusions to ordinary people. However, with little prospect for an extended period of growth on the horizon, the bill for all this debt will inevitably be presented to working people at some point in the next period. If Biden were truly concerned with the needs of working people, he would spend his next 100 days fighting for Medicare for All, eliminating the filibuster to pass the PRO Act in full, increasing the corporate tax rate well above pre-Trump levels, eliminating student, rental, and medical debt for ordinary people, and introducing a genuine Green New Deal that includes taking polluting industries into public ownership.

But as a servant of capitalism above all else, Biden won’t do any of this. The diseased capitalist system will continue to be wracked by bigger and bigger crises, and socialists need to diligently prepare for the tremendous revolts against inequality, oppression, and climate catastrophe on the horizon.