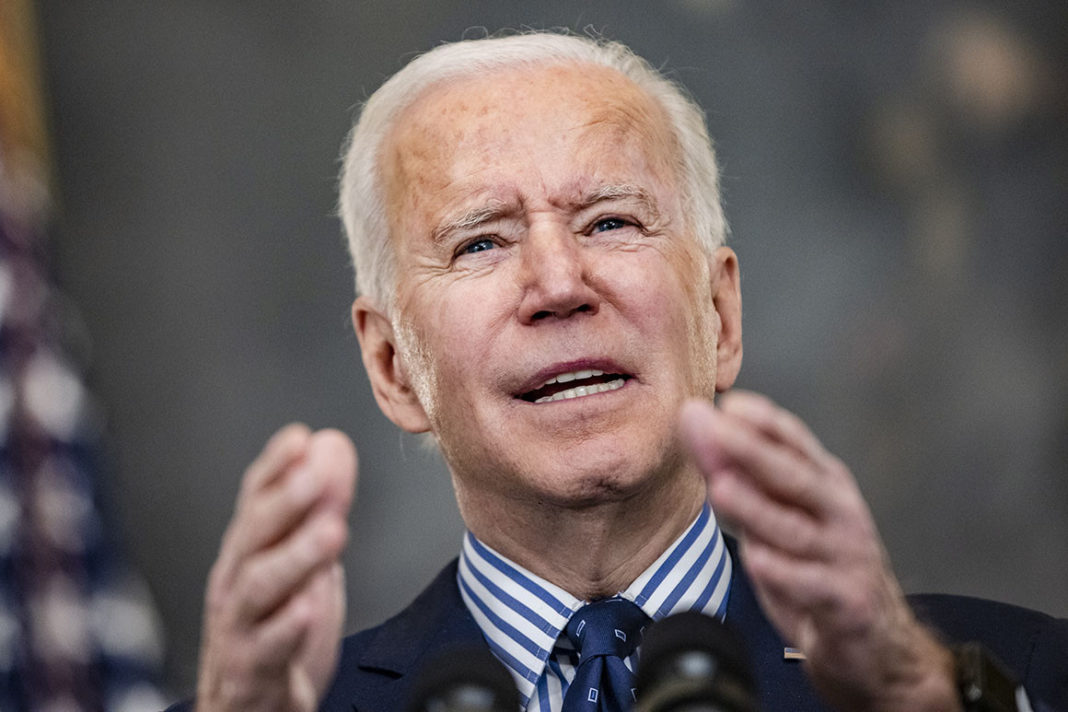 Biden’s $1.9 trillion stimulus package is all but law. This will be his administration’s first major legislative victory and it’s being lauded by Democratic leaders as a historic step forward. There is no doubt that it will have a significant short term effect in helping people devastated by the economic collapse triggered by the pandemic but at the same time it includes no long term gains for working people.

The package is the second largest stimulus bill in U.S. history, following the March 2020 CARES Act, and is packed with direct payments to ordinary people in the form of stimulus checks, unemployment benefits, and childcare credits. It also marks the first major payment to the states since the pandemic began, ostensibly allowing them to rehire laid off government workers and fill in gaping holes in state budgets. This is a marked contrast to last year’s stimulus which was largely a bailout for corporate America.

To illustrate the scope of the aid: With this bill signed into law, a two parent household with two kids will be eligible for $5,600 in direct stimulus payments. With expanded child tax credits, which will now be sent out in the form of monthly payments, families can receive between $250-$300 per child every month for a year. Additionally, families can now claim larger refunds to offset the mounting cost of childcare. It is claimed that the bill will temporarily halve child poverty in the U.S. Of course, once these measures expire in 2022, all that aid will dry up.

Looking at these spending measures in a U.S. context, it’s undeniable that it marks a shift in the approach of the American government especially compared to 2008-9. An approach that for decades has been marked by neoliberal austerity, frugal spending, and big business bailouts. The administration and the Federal Reserve have both said that fears of inflation, which were used in the past as one of the key reasons to limit aid packages, should no longer be the key consideration. At the same time, we must remember that the Democrats voted for every penny of the hundreds of billions shoveled into corporate pockets last year as well as the vast sums used to backstop financial markets. And when the bill comes due, they will not hesitate to put this on the shoulders of the working class.

What’s Beneath This Shift?

Biden is being celebrated for this move not just by the corporate media, who have dubbed him as some kind of Robinhood figure, but also by American capitalists themselves. In fact, 73% of CEOs support the package. Biden assembled an extremely powerful coalition of big business leaders to back his COVID relief bill. This includes JPMorgan CEO Jamie Dimon, Walmart CEO Doug McMillon, and unnamed higher ups at American Airlines, General Motors, Ernst & Young, and more. Their consensus on stimulus spending was, broadly, “nothing is too big.”

This is a stark illustration of the scale of the crisis facing American capitalism and the ruling class’ desperation for a bold solution. The massive stimulus passed last year — which was bipartisan unlike this bill — literally prevented a complete economic collapse. But while these measures have been seen by the ruling class as a whole as necessary temporary measures, they in no way address the underlying causes of the 2008-9 and 2020 economic crises including low productivity growth and the lack of investment in the economy by the capitalists. The scale of stimulus based solely on borrowing is made possible because of historically low interest rates and the position of the U.S. as still the most powerful economy with the world’s reserve currency. But debt levels not seen since World War II are not sustainable in the long run.

And it’s not just federal debts. Despite the fact that many Americans have increased their savings during the pandemic, and spending on goods has increased, consumer debt is at an all time high.

Biden’s stimulus measures are so widely supported by the American ruling class because they, alongside the increasing pace of vaccinations, will give a shot in the arm to the economy and could usher in a temporary boom. In fact the economy is already on an upturn driven by states reopening and online consumer spending. One major obstacle is that the pandemic is still far from contained despite the big drop in daily case numbers since January. There is a real possibility of a fourth wave caused by new variants of the virus which can be made worse by the reckless approach to reopening the economy. As long as the vaccines work, the trendline will still be towards a “return to normal” but this could be made a lot slower depending on how rapidly the more dangerous variants spread.

What’s Below the Surface

What lies beneath this economic rebound is also an unprecedented level of precarity facing the vast majority of American workers for whom even the boldest temporary measures and one-time-checks can’t resolve.

Almost 20% of renters are behind on rent payments, each of them owing an average of $5,600. In December rental debt stood at $70 billion. This number has grown with every month of missed payments. Biden’s stimulus plan includes only $21.5 billion in rent relief, less than a third of outstanding debt. A one time $1,400 check may help you make rent this month, but what about next month? What happens when the eviction moratorium expires in September?

Student loan debt has climbed to $1.7 trillion. The number of people defaulting on their student loans has dramatically slowed because of the temporary suspension of payments, but what happens when that suspension elapses in September? What do you do once you’re on the hook for, on average, nearly $400 a month in student loan payments?

While the scale of stimulus will have an immediate impact on millions of ordinary Americans and will provide a temporary boost to the economy, it is simply kicking the inevitability of a far bigger crisis slightly down the road. This will likely take the form of a major financial crisis caused by the implosion of the stock market bubble, or the corporate debt bubble, or internationally by a number of poorer countries defaulting on their debt. Any idea that capitalism can regain even the kind of stability it had at the beginning of this century is essentially a fantasy.

Again the fundamental problem with the stimulus bill, despite its enormous size and the positive short term effect it can have, is that it contains literally no lasting gains for working people. This tells us all we need to know about the leadership of the Democratic Party who serve corporate interests.

Progressives in Congress have never been in a better position to force their priorities onto the agenda. With such a slim Democratic majority in both the House and the Senate, progressives essentially hold the balance of power. In the House, the six core Squad members alone can delay any single piece of legislation until their demands are met. In the Senate, Bernie Sanders alone can do this.

Had they wielded this power the way conservative Democrats like Joe Manchin did, they could have won a stimulus bill with actual long-term gains for working people. With functional veto power on a “must-pass” bill like this, they could have at the very least demanded the undoing of the lowered eligibility for stimulus checks and the reduction in unemployment benefits. Joe Manchin won those two concessions without even really fighting for them.

In a broader sense, they could have called Biden’s bluff on the $15/hr minimum wage. Rather than politely asking Biden and Kamala to overrule the completely powerless Senate Parliamentarian, they could have withheld support for any bill that didn’t include a $15. With the Chamber of Commerce pressuring Biden to drop $15, it was clear to many that the invocation of the parliamentarian was a complete smokescreen. Exposing this and forcing $15 back into the bill would have lifted the pay of 32 million Americans and been a tremendous victory for the working class.

Instead, their tactics were limited to hundreds of “we must” tweets. We must pass $15. We must send out $2,000 checks. We must cancel student debt. AOC alone sent out 45 of these tweets since Joe Biden was inaugurated. Unfortunately, all these proclamations about what “we must” do were not accompanied by a strategy for how we do them. Bernie, to his credit, did force a vote on $15 which was very useful in exposing the cracks in the Democratic Party itself — but much more could have been done.

There will always be a reasonable excuse for holding back. “It’s not strategic,” “an easier battle is coming,” “now’s not the time.” But these excuses are almost always, in reality, cover for a lack of political courage and fear of conflict with the establishment. Had the Squad and Bernie coordinated a real struggle to demand $15, there would have been an important section of society prepared to back them up. They could have mobilized their millions of supporters to take action, and we could have won.

The coming two years will be a massive test for the left. Are “democratic socialist” and “progressives” representatives in the halls of power prepared to go to the mat for working people? If not, are organizations like the DSA prepared to break with an approach of blanket support for them?

Socialist Alternative will fight for clarity around these questions within the broader socialist and workers movement. The scale of the crisis facing working people demands that our representatives do absolutely everything they can to propel the movement forward, rather than holding it back.

A politically courageous strategy that can win real gains for working people will ultimately find itself in head on conflict with the Democratic Party. The weaknesses of Bernie Sanders and the Squad are tied to their desire to remain tolerable within the Democratic Party to its leadership.  Ultimately, winning the decisive battles ahead requires the creation of a new, truly democratic, political party for working people in the U.S.