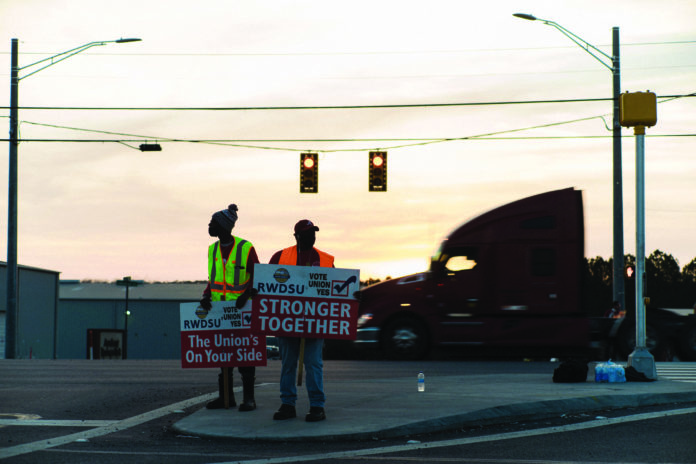 The union drive at the Amazon warehouse in Bessemer, Alabama is one of the most significant events in the labor movement in decades. The 5,800 workers at Amazon’s BHM1 facility have set a powerful example of courage and solidarity that will be felt for years to come, inspiring other warehouse workers and beyond to get organized, form unions, and fight back against corporate giants like Amazon.

The eyes of the country have been on Bessemer for weeks now, and the drive has attracted an enormous amount of media attention as well as support from well-known figures from Danny Glover to Bernie Sanders. More important is the outpouring of support that has been shown by ordinary workers and unions who understand that a victory there could put the labor movement as a whole back in a fighting position after decades of defeat and decline. Our movement needs to go all out to support this drive and get geared up to unionize Amazon warehouses and other unorganized workplaces across the country.

Essential Workers Are Not Disposable

Amazon’s astronomical profits come from the work of its hundreds of thousands of employees who package, move, and distribute products around the globe. Under COVID-19, more people were forced to rely on Amazon to deliver essential goods, meaning more workers were hired, production was ramped up, and Amazon founder Jeff Bezos pocketed an extra $80 billion in wealth during the last year alone. This number reflects the astronomical rise in income inequality in recent decades, which has skyrocketed under COVID-19 conditions. As one example, the world’s 10 richest people gained enough during the pandemic to both buy everyone in the world a vaccine and guarantee no one went into poverty.

Soaring inequality is strongly linked with the decimation of unions in the U.S. Union membership fell from a high of 30% in 1950 to around 11% today and just 6% in the private sector. Unions are the most effective way for workers to fight for better wages and working conditions, and that is why they’ve been attacked by the bosses and billionaires for as long as they’ve existed.

The logistics industry has grown enormously in recent decades and has emerged as an absolutely central part of the American economy. If the millions of workers employed in places like Amazon warehouses stop working, the economy literally stops functioning. This is even more true now during the pandemic with the huge increase in online shopping. But while tens of millions of workers in logistics and other industries have suddenly been deemed “essential workers,” they’re still treated in large part as disposable. We don’t need to look any further than Amazon’s disastrous response to the coronavirus and total failure to adequately protect the health and safety of its workers, who were not given hazard pay past June, not provided sufficient paid time-off, and not given proper PPE. The raised confidence of workers regarding their essential role in society is coming into sharp contradiction with their mistreatment in the workplace and beyond while the billionaires brazenly get rich off their backs.

Why Bessemer, Why Now?

It was only a matter of time before a union drive would come directly to Amazon’s door. However, few people predicted that it would start in Alabama, which has some of the most restrictive anti-union laws in the country. Scratch beneath the surface though and it’s easy to see why.

Workers at the Bessemer warehouse came together late last year and started organizing with the Retail, Wholesale, and Department Store Union (RWDSU), a union with deep roots in Alabama and which recently unionized local poultry plant workers. For months on end during the fall and winter, workers and union organizers were posted 24 hours a day at the gates of the warehouse, talking to workers coming and going from their 10 to 12-hour shifts of picking, packing, and shipping Amazon products. They eventually collected nearly 3,000 union authorization cards, more than enough to trigger the election that wrapped up on March 29.

Despite the weakness of the unions in the South relative to much of the rest of the country, there is an impressive history of labor and socialist organizing in the Birmingham area in particular. The Amazon warehouse itself is built on land that was sold to it by U.S. Steel, who operated a number of facilities in the area and whose workers were organized into a powerful union as part of the Congress of Industrial Organizations (CIO) starting in the 1930s and 40s.

The CIO during those decades had a powerful record of fighting racism. Black Lives Matter has emerged as one of the most important struggles in recent years, whose impact has been felt in the labor movement in the present day as well. The vast majority of the workers at the Amazon warehouse are Black, as are a majority of the population of Bessemer and Birmingham. The Black Lives Matter uprising of last summer has had an impact on the campaign as well, inspiring workers who are fed up with the extreme exploitation they face to bring the movement into the workplace. Black workers experience particularly brutal exploitation and oppression under capitalism. Racism is a key tool that the capitalists use to hyper-exploit Black and brown labor and sow divisions in the working class to keep their system going. The BAmazon union drive has built on the anger expressed in BLM while pointing to the exploitation of all Amazon workers.

The bosses at Amazon and other big corporations only care about profit, workers’ lives and well-being be damned. There is nothing fundamentally different, though, about the working conditions in the Bessemer warehouse from any other Amazon facility: breaks for some workers are non-existent because it can take 15 minutes to walk from one side of a giant facility to another, injury rates are up to three times the average rate for warehouses of all kinds, and there is constant, invasive surveillance and monitoring to force workers to keep up with backbreaking quotas.

Amazon’s rabid union-busting campaign has used every dirty trick in the book. This amounts to nothing less than an attempt to suppress the vote of a majority-Black workforce in the deep South, which the ruling class in the region of course has a long history of doing.

Amazon’s anti-union messaging is relentless in targeting the economic fears and anxieties of workers, like threats saying that Amazon would be forced to close the warehouse and relocate, a ridiculous claim given its size and strategic location. There are also lies  and dishonest claims about how a first contract would jeopardize already-existing wages and benefits.

Alabama is one of 28 “right-to-work” states, meaning that workers are not required to pay union dues in unionized workplaces. In reality, these laws are a naked attack on the rights of workers to form strong unions that can collectively bargain and win strong contracts to improve wages, working conditions, and rights on the job. Unions should strongly challenge the logic of “right-to-work” at every turn and defend the importance of everyone contributing to the union financially and otherwise to ensure that the maximum unity among workers is achieved. A successful union drive in Alabama, built around clear demands, would mean a huge leap forward in the confidence of workers in the South in particular who have suffered from the terrible ramifications of right-to-work laws and weak unions for decades.

This is especially important for beating an enemy as strong and powerful as Amazon, with its immense wealth and resources. Winning workers over to the union will require putting a strong economic program forward with clear demands like a $20-an-hour minimum wage, overtime pay for shifts longer than eight hours, longer break time, shorter shifts, and doing away with “Time Off Task” (TOT). And actually winning those demands themselves in a first contract will require a strong base and organized groups of workers in the union who are working to carry out that fight directly on the shop floor. Amazon will resist even the smallest gains, and all options will need to be on the table to force them to give anything up, including actions like rallies, slowdowns, walk-outs, and even strikes.

A victory in Bessemer would send shockwaves nationally and internationally, providing a huge boost of confidence to Amazon and logistics workers and the labor movement as a whole. Even with a loss or drawn out legal battle, an economic upswing due to the stimulus and increased vaccination could create a favorable situation for the labor movement as workers typically move into struggle more when there’s less fear of unemployment and more economic stability under their feet. If the PRO Act passes in Congress, which would make union organizing dramatically easier, it would also be an absolute sea change for the labor movement. But getting it passed in its full form will require mass pressure from below as well.

The raw anger and determination are present today to create a widespread Amazon unionization wave. A win in Bessemer could set off that raw kindling. A loss would be a major setback, but the genie is now out of the bottle — workers can come together and fight a strong campaign against Amazon even in the deep South.

Already there are thousands of Amazon workers around the country reaching out to RWDSU and other unions about organizing their warehouses. The powerful example set by this union drive is going to continue to capture the imagination of workers for years to come, and even with a loss there will undoubtedly be a second Bessemer somewhere down the line. The “Red State Revolt” of education workers that began in West Virginia three years ago has kicked off a resurgence of the labor movement, which continues now in deep-red Alabama. We all need to study and learn the lessons of this incredible campaign and continue to rebuild a fighting labor movement that can unionize Amazon everywhere. Socialist Alternative will be doing everything we can to help make this a reality.