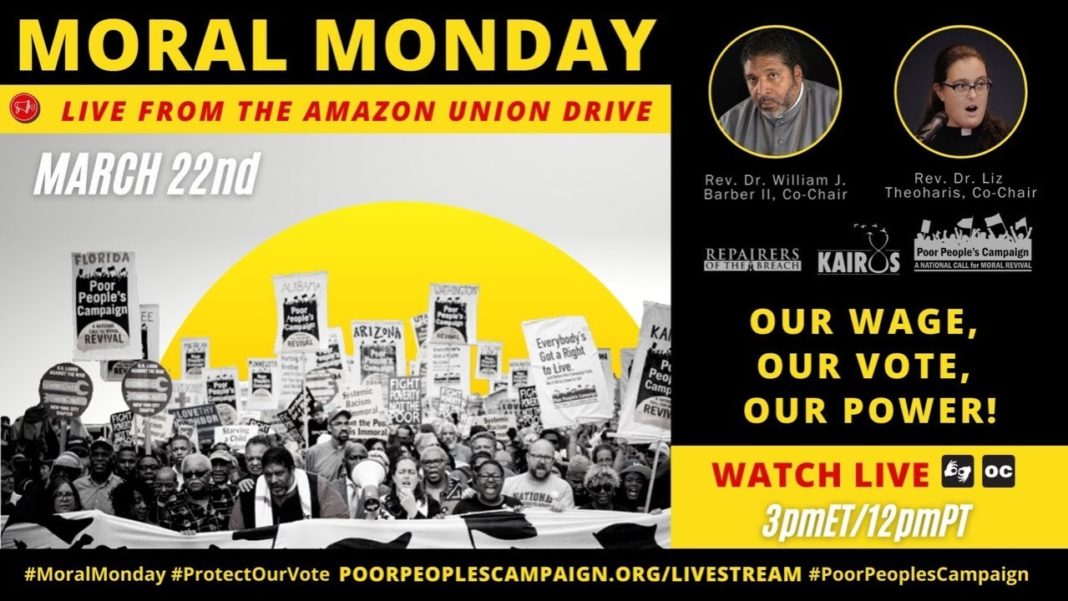 We Told Jeff Clark to Call off the Dogs on Selma. We Need You to Call off These Union-Busting Dogs in Bessemer.

Reverend Barber invoked the legacy of racial division in the South that helps explain the extreme concentration of poverty, the ubiquitousness of right to work laws, and fractured labor movement. It is in this context that workers in Bessemer are coming up against the same voter repression and intimidation tactics that the ruling elite have always used in the South, and in Alabama in particular.

To take on Amazon in Bessemer and warehouses across the country will require rock solid solidarity between workers of all races fighting for union recognition, better wages, and liveable working conditions. To fight racism more broadly will require a multi-racial working-class movement, the glimmers of which we saw over the summer, that can link up with the labor movement to challenge racist policing and segregation. Ultimately, capitalism has racism encoded in its DNA. From the Atlantic Slave Trade to the Bessemer union drive today, the ruling class has weaponized racism as a tool of division to line their pockets with profits. We need a new, socialist society, based on solidarity and equality.

And what we wanna be clear is the reason we’re here today – and this is a press rally, it’s COVID-safe, that’s why you don’t see the parking lot full – but what you’ve got, for the members of the media, are tens and tens and tens of thousands of people from all over the world and all over the country. You have major leaders from labor, from SEIU, representative from the AFL-CIO Richard Trumka, you got AFSCME, you have CWA, you have the commercial food workers, it’s a large number of folks, they’ll be speaking in a minute to the nation.

But folks have decided that it’s time to nationalize Bessemer. See, we don’t believe change comes from DC down; change comes from Birmingham up. Change comes from Bessemer up. Change comes from Alabama up. That’s the move, and it’s time to nationalize this movement and help folks understand how this is their fight, but it’s our fight! And it’s a fight for some very huge things. […] I call you all the Bessemer 6,000. Right? The Bessemer 6,000. And there’s some things I want to make sure the media understands. I’m glad this is a virtual rally – we didn’t want everybody to come out here for safety, but you better believe there are thousands and thousands of people [in support] and there’s media from all over the country.

And I want you all to know that we come here in a context in Alabama. Over 900,000 people are poor and low wealth. Nine hundred thousand! The seventh highest in the nation.[…] I want you to know, national media and local media even, 450,000 people in Alabama don’t have healthcare. Because Alabama’s been one of those states that’s refused to do something as simple as expand Medicaid. Alabama has the worst voting laws. In fact, it was the Shelby case that started here that gutted the Voting Rights Act. It’s important that we understand the context.

But I also want you to know that we know this, this is something we know: that strengthening the labor movement in the South is critical to any effort to transform this country. You cannot transform America and bring healing to America until you transform labor in the South, and unions are essential for poor and low-wealth working people to build and demonstrate power.

In his book The Strange Career of Jim Crow the historian C. Van Woodward noted that segregation – let me teach you a little history coming to this moment – was really, segregation was a political strategy employed by the wealthy interests of the south to keep the southern masses of black and white folk divided so that they could keep the labor cheap. There wasn’t just segregation because you don’t like black people.

Ta-Nehisi Coates teaches us that race is the child of racism; racism comes first. And what racism is at its core is not just a hatred for black people, but it’s a hatred of humanity and it is an economic strategy to keep people divided so that a few can have all they want. You gotta understand, you cannot have a conversation about racial justice without talking about economic justice. You can’t have a conversation about stopping voter suppression without stopping union-busting. Because they come from the same core.

That’s why 56 years ago this week – this week 56 years ago – at the end of the Selma to Montgomery march, guess what? Dr. King connected the fight for voting rights and the fight for labor rights. Now a lot of people don’t talk about it; they think Selma was just about voting rights. But when Dr. King got to Montgomery, stood on those steps, this is what he said: “The threat of the free exercise of the ballot by the negro and white masses is what created a segregated society.” This is what happened when the negro and white masses of the South threatened to unite and build a great society, a society where greed and poverty would be done away with. The battle to suppress the vote, and the battle to suppress labor rights, has been the tactic used by the southern white aristocracy to hold on to their money. And it’s still true. The same money that’s behind voter suppression is behind blocking labor rights. And we need to understand that.

And so this is the first viable attempt to form a union at Amazon in the United States. You all are first, just like those folks were first to cross that bridge. This is not just Bessemer, this is the world. Bessemer is now our Selma. This is the first attempt in Amazon in the United States to unionize. And 6,000 of you have been called to mail in your ballots, and the national labor relations board said this has to happen, they can’t block it. They’re trying to suppress it, but the only way they can block it is you don’t vote. The only way! And I wanna thank the Retail, Wholesale, and Department Store Union and all of you who are here.

Now, here’s what’s at stake. All the workers at the Amazon plant (and any plant that’s not unionized, but let’s talk about this one) are at-will employees. Means they can be fired at the will of the boss, no just cause. But if you have a union, you become just cause employees. You shift – right now, you are at will, but win the union, it becomes just cause. They have to have a just cause in order to fire them. Furthermore, you can call on the union to help mediate and file charges on behalf of the worker.

Now Amazon said last year – I gotta talk about this ‘cause some folks not gonna like it (but you know, so what, I’m too old to lie now). Bezos last year said he was concerned about black lives matter. That’s what he said. And to show his concern, he said he was gonna give ten million dollars to black organizations. Chump change! And he was gonna… give millions of dollars to organizations. I wanna say today that Amazon doesn’t care about black lives; if you give chump change to black organizations but then block union and labor rights for the workers right here in Bessemer. Don’t play with us like that! In fact, every national organization that is taking money from Jeff Bezos oughta give it back until he stops the attack on these workers.

Now, we have a phrase for that, I’m a preacher but we have a phrase for that, and Jesus used the word so I can use it: “that’s a damn shame!” The same thing Jesus said to that fig tree was putting on like it was a fig tree but it wasn’t producing any figs. Jesus said “I damn you,” cause you’re putting on. To say you care about folk and 20,000 of your employees catch COVID, and then you give them a little bit of hazard pay and then as soon as folks not watching you take it back, while at the same time you’re increasing their work, and that would’ve never happened if you had the union!

But not only that, Amazon has tried to do everything they could. They send mass text messages out. Y’all need to know this in the nation, you know, we mad about what trump did with text messages, I see what Amazon do. They send messages out with lies, claim it’s gonna cost jobs, then they make their workers go to classes, and then the instructors try to scare the workers, and then when the workers know the truth and stand up and say “nah that’s not true” they call them to the front of the class and take a picture of their badge, their workers. That’s what’s happening right here in Alabama! And Alabama already knows that, that’s the kind of foolishness they did back in the days of the civil rights movement: intimidation.

And then lastly, 19 workers, as I said, have died. The workers need a union and a contract. The movement doesn’t end with March 29, the movement gets another spark! Truth of the matter is, you win this battle here, it opens up the whole South. You are gonna win, and your win here is gonna be just as big as when they won going across that bridge, ‘cause it’s gonna open up the whole conversation again and the whole action around connecting the battle against racism and the battle against denying people labor rights again.

So you are here today as part of a movement that Dr. King foresaw 56 years ago. When he said it, he said it on those steps, that whenever we figure out that the whole goal of racism is to keep the poor white masses and the poor black masses and brown masses separate, and if we figure out, as you are doing here, that we aren’t gonna be separated anymore, and you win, this is the kind of fusion coalition that can change the south. It did it before, and it can do it again. What you are doing here is showing the nation how to wield the kind of power that’s necessary to raise the $140 million poor and low wealth people out of poverty, for real for real. And to get the 87 million people healthcare.

This is a part of America’s third reconstruction. You are not just workers in a small plant in Bessemer. Nobody really knew the name of Selma 56 years ago. Nobody didn’t really know it. But when God got through, when the people got through, when they organized Black and white and brown together – and they wouldn’t let anything turn them back – and they won; ever since then and until the end of time forever and a day people know the name Selma. You winning, people will know the name Bessemer, and the Bessemer 6,000. And your name will give people courage to fight all over this country. And if when we change the south, we change the nation. You want healing to come? Establish justice in the South. And then we can be assured of domestic tranquility.