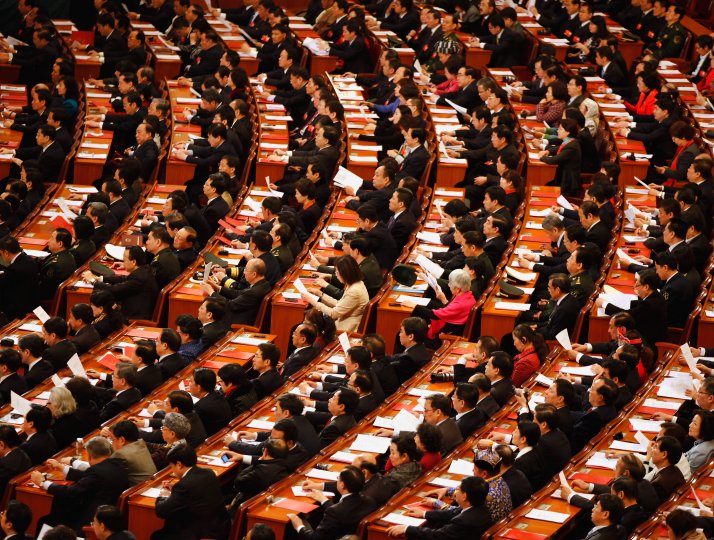 China’s “twin sessions” or Lianghui, the annual gatherings of the Chinese People’s Political Consultative Conference (CPPCC) and the National People’s Congress (NPC), got underway in Beijing on Thursday, March 4.

Neither body has any real power. They are merely decorative adornments for the dictatorial regime of the so-called Communist Party (CCP), which has increasingly become a one-man dictatorship under supreme leader Xi Jinping. The NPC and CPPCC are closely watched mainly because important new policies are announced here, worked out long in advance by Xi and his top advisors, with the 5,000-plus delegates applauding wildly.

In the past two decades the incredible wealth of the Chinese capitalists who double as delegates to the Lianghui has been the focus of much attention. This year a new record has been set. The wealthiest capitalists attending the Lianghui have seen their fortunes grow by an average of 68 percent over the past twelve months according to a list of top billionaires published by the Shanghai-based Hurun Report. These delegates are worth a combined US$391 billion which is more than Hong Kong’s GDP in 2020 (US$349 billion).

Last year, despite the pandemic and crippling lockdowns earlier in the year, China created five new billionaires every week. China “pulls away from the USA” reported Hurun, with 1,058 Chinese billionaires to America’s 696. The CCP’s 100th anniversary, which falls on July 23, will see Xi’s regime performing political contortions to obscure the reality that the class character and politics of the 1920s Communists were the polar opposite of today’s capitalist CCP oligarchy.

The NPC will after all adopt a GDP target for 2021, although many commentators believed the practice would be abandoned as it was last year. This year’s target will be “above six percent” which most observers consider conservative and a synch to achieve. The average forecast for China’s 2021 growth among economists surveyed by Bloomberg was 8.4 percent.

China has the distinction of being the only major economy to grow in 2020, albeit at the weakest rate since 1976. As is always the case some statistical manipulation has been used. Still, going by the official numbers, China’s economy grew by 2.3 percent last year while Germany’s contracted by 5 percent and the US by 3.5 percent. While GDP growth of 8 percent or more would be eye-catching, this year’s growth will be flattered by the low base effect from 2020. If we combine the two years 2020 and 2021, notwithstanding such a rebound, the general trend is one of continued slowdown from the lofty double-digit growth rates of a decade ago.

Workers are not gaining from this “recovery”. For the first time since 2009, not a single Chinese province increased the minimum wage last year. All the indications are that this wage freeze will be extended in 2021. The government is also preparing to launch a major attack on pension rights – attacking women workers as a first step by raising the female retirement age from 55 to 60 to achieve “equality” with men. This is because China faces a demographic time bomb of falling birth rates and a shrinking labor force.

Government pension funds are already running low. Nearly half of China’s 32 provinces and regions are expected to report shortfalls in their pension funds by 2022, compared to six in 2015, according to a report by the China Academy of Social Sciences. But this issue can spark major unrest. A survey in 2013 showed 95 percent of respondents were against raising the retirement age.

In 2027, India is tipped to overtake China as the world’s most populous country. The decline in China’s labor force – projected to fall from 759 million to 661 million between 2017 and 2037 – has serious implications for the economy and the CCP’s plans to overtake the US as the world’s number one economy and military superpower.

Another crisis-in-the-making concerns galloping debt levels. China’s combined public sector, corporate and household debt rose to 280 percent of GDP in 2020, up from 255 percent of GDP in 2019, according to the People’s Bank of China (central bank). This rises to about 295 percent of GDP when foreign debt (which the PBoC estimates to be 14.5 percent of GDP) is included. It follows that China’s modest 2.3 percent growth in 2020 was achieved by its biggest ever increase in debt. This is not sustainable.

The most important feature of this year’s twin sessions will not be the headline policy “decisions” but the push by Xi Jinping’s ruling faction to further consolidate his power. There is an ongoing power struggle within the CCP-state. Xi is pushing hard to seal his control, preparing the way for him to win a third term in office at a key leadership meeting next year, positioning himself to become ruler for life.

Xi’s ever greater concentration of power and his abandonment of the internal limits and checks introduced by Deng Xiaoping’s regime in the 1980s, to establish a more “collective” authoritarian system, is a sign of serious crisis. Xi’s policies are stoking huge pressures in society as repression increases exponentially (as shown by crackdowns in Inner Mongolia and Hong Kong in the past year) and discontent among the working class is growing as real wages fall. This is especially true of migrant workers who make up two-thirds of China’s blue-collar labor force.

Drivers at food delivery company Meituan have called a strike on Monday, March 8, demanding increased pay and improved conditions. This follows the arrest last month of Xiong Yan, a driver at rival delivery platform Ele.me. Xiong is accused of forming an unofficial trade union for delivery workers. The Chinese dictatorship has a zero tolerance policy towards independent trade unions.

The twin sessions will endorse a new political system for Hong Kong, which will mark the final nail in the coffin for the city’s limited parliamentary democracy or more accurately “semi-democracy”. Hardened authoritarian rule is the CCP plan for the city’s future. The jailing this week under Xi’s National Security Law of over 40 pro-democracy politicians pending trial for “subversion” in May was clearly staged for the benefit of the NPC and CPPCC meetings in Beijing. Chaotic and brutal court scenes in Hong Kong – with several defendants fainting from exhaustion as the proceedings took four days without a break – are designed to show the power of Xi’s regime, its defiance of US and Western “meddling”, and to send a warning to all who would challenge Xi. This applies to workers in China trying to organize for basic rights and Xi’s factional rivals in the CCP who are growing uneasy over the direction the state has taken.

The latest crackdown removes and imprisons the entire field of opposition candidates for Hong Kong’s sham parliament, the Legislative Council (Legco). A report submitted to the twin sessions on March 4 made no mention of “one country, two systems” or “Hong Kong people ruling Hong Kong”, two previously key phrases to describe the limited autonomy that was offered in the past when the city transitioned from British colonial rule to rule by China. This terminology has been discarded by Beijing in favor of stressing “China’s sovereignty” and “only patriots can rule Hong Kong” – the latter means CCP supporters only, and disqualifies anyone suspected of democratic inclinations.

The NPC is expected to approve a new voting system for Hong Kong, which further removes any possibility for the dictatorship to lose control of the Legco or be forced to accommodate representatives of the democracy struggle. The Legco elections which were supposed to be held last September are postponed until 2022 and the elitist pro-CCP Election Committee which elects the Chief Executive every five years will be further rigged in favor of pro-CCP forces and given new powers to nominate or veto Legco candidates.

There are signs that Xi will not stop at nullifying the democratic opposition in Hong Kong, but will also push to reconstitute and purge the pro-government camp. In Beijing’s eyes the existing pro-CCP parties are incompetent and have failed to rule Hong Kong in its interests. Hong Kong’s traditional business tycoons may also lose some of their political privileges as they too are seen as insufficiently zealous in speaking up for Beijing. A full takeover by the CCP and its business cronies, with Hong Kong’s limited autonomy annulled, is proceeding rapidly under Xi’s guidance.

In keeping with Xi’s policies in other areas, repression and hardline rule replace compromise and bridge building. The prospects for Hong Kong’s fragile democratic rights look extremely bleak, but at the same time Xi’s policies are stoking mass anger and political radicalization, which cannot indefinitely be suppressed by police measures.

By continually doubling down on hardline repressive policies, while an unsustainable debt-driven economic policy inflicts more and more economic pain on the working class, Xi’s regime is creating an explosive future.