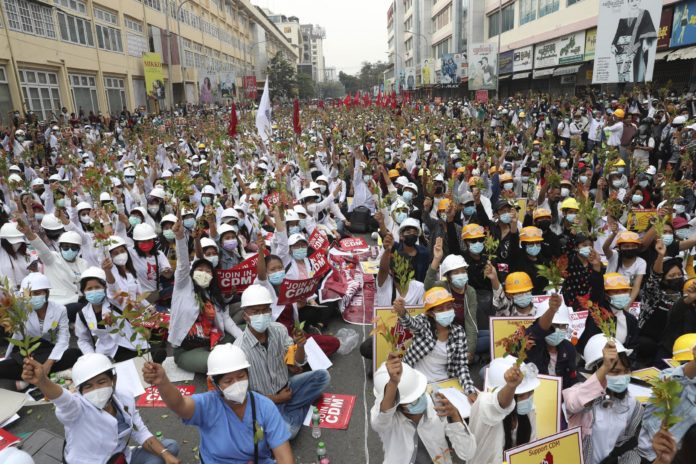 Myanmar’s military (the Tatmadaw) staged a coup on February 1, the day before a newly elected parliament was to take office. A state of emergency was declared and State Counsellor (prime minister) Aung San Suu Kyi was arrested.

Hundreds  of thousands of protesters took to the streets, joined after a few days by medical workers who launched strike action from over 80 hospitals. This inspired civil servants from the Ministry of Energy, copper miners, and even members of the police force to join.

The military cracked down on the protests with brutality, at first using tear gas and rubber bullets, and shutting down internet communications and social media. On the weekend of February 20-21, snipers were stationed on roofs, barricades and fleets of vehicles were deployed, and multiple protesters were shot and killed by state security officers with live ammunition.

Instead of intimidating people into submission, millions took to the streets on February 22 in the biggest wave of mass protests yet, with hundreds of thousands of workers participating in a general strike. Civil servants, bank workers, doctors, supermarket cashiers, telecom operators, food service workers, and oil rig operators marched, effectively shutting down the entire country’s economy and financial system.

The military leadership, which controlled the country since the 1960s, was forced in the past decade to allow elements of democratization, partly because the move opened many doors internationally for the ruling class and partly because a wave of protests in 2007 threatened internal stability. In 2011, the military gave way to the country’s main political opposition party, the National League for Democracy (NLD) led by Aung San Suu Kyi.

Those who took part in protests against the military in past years pinned their hopes on the NLD when they entered government. However, the NLD from the outset opted for loyal cooperation with the army leadership.

The coup itself demonstrates the failure of this approach. There has been growing discontent with the policies and direction of the NLD in recent years. The NLD offers nothing to the various ethnic groups in Myanmar in areas like the Shan or Kachin states, and in fact Aung San Suu Kyi has denied the horrifying persecution of Rohingya Muslims in front of world leaders.

Change will not be achieved by governing with the military or by accepting their conditions. Democratic reforms are also insufficient to change the living standards of the majority. There is a need for a program of socialist change and the building of a revolutionary organization that popularizes this need in organized and coordinated strike committees.

These committees should be set up in all workplaces and neighborhoods, with coordination to lay the basis for a constituent assembly. The movement in Myanmar needs to draw in workers, including those exploited by joint venture companies in special economic zones, and develop solid ties with the oppressed masses across the entire Asian continent.

Read the full length article, and more international news at internationalsocialist.net, the website of International Socialist Alternative, which we are in solidarity with.