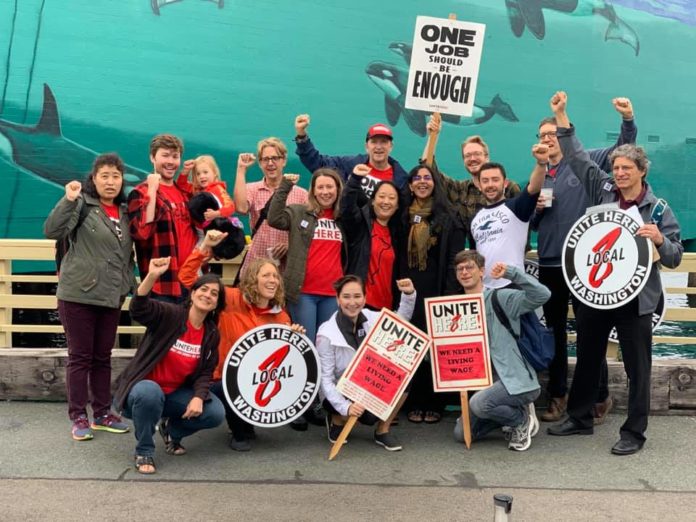 As the billionaire-backed, right-wing recall continues in Seattle against socialist Councilmember Kshama Sawant, more labor unions are responding to the calls of rank-and-file union members and endorsing the Kshama Solidarity Campaign.

UNITE HERE Local 8, which represents around 5,000 hospitality workers in Washington and Oregon, is among the latest additions to the growing list of unions that have endorsed Kshama Sawant against the recall.

This reflects a growing understanding, among both union members and many leaders, that the right-wing recall is not only an attack on Kshama, but an attack on the entire workers’ movement.

Since Kshama’s first election campaign for City Council in 2013, she made it clear that her office was going to unambiguously fight for and alongside unions, the working class, and marginalized communities. As a member of AFT Local 1789 herself, Kshama has always understood that the power of her office comes not from her as an individual, but from working people getting collectively organized. Rank-and-file union members have always been at the heart of the movement behind her. Labor activists have played a key role in our movement’s victories in Seattle, including the 15 NOW movement, which made Seattle the first major city to pass a $15 minimum wage, and last year’s Tax Amazon victory.

Over 400 rank-and-file union members have signed the Labor for Kshama Solidarity petition, standing with Kshama against the right-wing recall and calling on their unions to do the same. Among the signatories are members of more than 70 union locals, including more than 100 union stewards or other elected leaders. If you haven’t signed, add your name now!

This support was on display earlier this month as rank-and-file members of one of the largest unions in Washington state brought a motion to the quarterly membership meeting, urging the union’s Executive Board to endorse the Kshama Solidarity Campaign as soon as possible. The motion passed with a clear majority.

Over 150 union members have provided quotes explaining why it is important for union members and the labor movement to defend Kshama. While we don’t have space to reproduce all of those quotes, we want to provide a few to highlight the depth of support for Kshama among rank-and-file workers:

“The political forces that want to remove Kshama are the same ones that will break my union, take my medical coverage, and take away my freedoms of speech. We have followed Kshama’s leadership.  She has consistently from her position of leadership as a Seattle City Council member promoted a pro-labor, pro-working class agenda. We must not lose Kshama’s essential influence and voice in the council.” – rank-and-file electrician, IBEW Local 46

“As a frontline grocery worker, I support Councilmember Kshama Sawant against attacks from the right wing and from bosses like Amazon and Kroger who are making runaway profits during the pandemic and pay next to nothing in taxes. We need more militants and socialists like Kshama in elected office and in the labor movement to protect essential workers, especially women, people of color, immigrants, and queers who are hit hardest by the virus and the financial crisis.” -rank-and-file grocery worker & union steward, UFCW Local 21

“Kshama has always fought for the working class; now we need to fight for her.” -rank-and-file driver, Teamsters Local 117

“Kshama is our voice in this city, she stands with union workers and stands up to corporate greed, we need more people like her in politics, she is the voice of the working class in Seattle. Solidarity Forever.” – rank-and-file carpenter, Carpenters Local 30

“Kshama Sawant represents a denial of the status quo of corporate corruption in our local politics. Kshama represents all of us in organized labor, and I full-heartedly endorse Kshama’s work and politics.” – rank-and-file healthcare worker, SEIU 1199NW

“Kshama is the only political ally I have ever personally seen stand with the working class employees and tell the employer (UW) to treat us fairly. I have seen her at rallies standing with us for better pay. She cares about people and that is why the right-wing wants her gone. We need more people like her, we can’t allow this.” – rank-and-file education worker & lead steward, SEIU Local 925

Left and Labor Under Threat

These quotes (and dozens more) demonstrate that union members understand the importance of keeping fighters like Kshama in office.

While Democrats continuously fail to address workers’ needs during this pandemic, Kshama and the socialist movement in Seattle are fighting for real COVID relief for working people: an extension of the eviction moratorium to the end of 2021, the right to legal counsel for renters facing evictions, the cancellation of rent & mortgage payments for the duration of the pandemic, and a Green New Deal union jobs program. The working class needs more independent fighters like Kshama, and we need a political party of our own to fight for what we need.

If the recall campaign against Kshama succeeds, it will embolden big business and the right wing to go after all the victories we have won. Already, Washington State Democratic politicians are making plans to repeal or reduce our historic Amazon Tax victory, even though they have decisive majorities in both the House and the Senate, and control the Governor’s mansion.

If big business succeeds in this recall, they will attempt to turn the Seattle Council into a rubber stamp for the corporate establishment. At the same time, they will work even harder to isolate and undermine organized labor.

A quick look at the Recall Sawant donor list should be enough for unions to answer the question “Which side are you on?” The recall campaign is funded by people like Martin Selig, the billionaire Trump supporter and real-estate developer who has fought against every progressive victory in Seattle. Also on the list is Jeannie Nordstrom, a member of the billionaire Nordstrom family, owners of the anti-union Nordstrom retail chain, which fought successfully against workers’ and UFCW’s attempt to unionize Nordstrom in Seattle in the 1990s.

Even major capitalists outside Seattle have donated to the recall campaign. This includes people like Eric Mendelsohn, a nursing home real estate magnate from Tennessee. Mendelsohn’s company, National Health Investors, is part of the rapacious for-profit nursing home industry, whose profit-driven response to COVID-19 is responsible for the deaths of thousands of nursing home workers and residents. Why do corporate ghouls like Mendelsohn, who live thousands of miles away, have a stake in removing Kshama from office? Because they understand that our victories in Seattle, like the $15 minimum wage or the Amazon Tax, inspire workers to fight for and win similar victories across the country.

It is urgent that all unions not only endorse the Kshama Solidarity Campaign, but get active in it. Three unions, WFSE 1488, WFSE 843, and the Seattle Education Association, have already made financial contributions to the campaign from their political funds. Other unions, like UAW 4121, have called and texted their members and collected dozens of signatures for our labor solidarity petition. More unions should follow their lead.

Kshama represents workers and is accountable to us. That means it’s up to us and our organizations to defend her–with our time, our voices, and our money. We won’t get any help from big business or the political establishment.

Bringing unions into this fight is about more than defending Kshama; it’s about rebuilding a fighting and independent labor movement. For too long, too many union leaders have “gone along to get along,” relying on backroom deals with bosses and the Democratic establishment. Likewise in our union contracts, many labor leaders have allowed concession after concession to the bosses, accelerating the decline of workplace standards and undermining organized worker power.
We need to regenerate the labor movement from the ground up, with organized involvement by rank-and-file members. Urging our unions to endorse the Kshama Solidarity Campaign can and should be part of this effort. If you are a union member and want to help, join the fight by signing our Labor for Kshama Solidarity petition and reach out by email at [email protected].