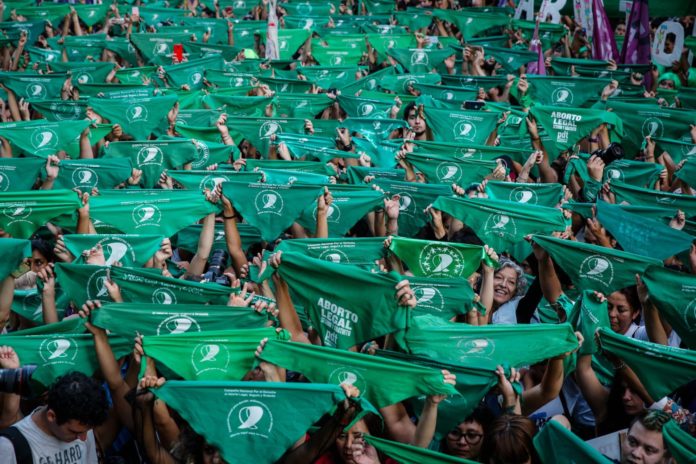 In a historic day, the morning of December 30 and after 12 hours of debate, the archaic Argentine Senate approved the Voluntary Interruption of Pregnancy Act (IVE) by 38 votes in against 29.

When the result of the vote was announced, the thousands of Green Tide’ activists — the mass feminist movement which has fought for abortion rights for years — who were attending a vigil outside the Congress and in more than 120 plazas (squares) in all the provinces of the country, as if they were one person, amid celebrations, tears and hugs, burst into a joyful chorus: “it’s [the right to abortion] law!”

Condensed in that moment were decades of struggle by the feminist movement for the recognition of the elementary human right to be able to decide about one’s own body This struggle passed an important milestone in 2005, with the creation of the National Campaign for Safe and Free Legal Abortion (La Campaña) as a space for coordination of the majority of feminist organizations in the country. But the real explosion came in 2018, when the issue was debated in congress and in the whole of society. This saw the entrance onto the scene of a whole generation of teenage women: the “pibas” who are now the engine of this huge movement. The use of the green handkerchief as a symbol of the struggle for legal abortion and as a tribute to the handkerchief of the “Mothers of the Plaza de Mayo”, who are fighting for the 30,000 people who “disappeared” during the military dictatorship, became popular among the protests — which became known as “big handkerchiefs”.

This victory is the product of the collective struggle of three feminist generations that give life to the Green Tide. The movement will continue to spread because there remains the struggle for the effective implementation of the law against the limitations that the legal text itself contains and against the obstacles that the reactionary sectors opposed to women’s rights will attempt to put in place.

Furthermore, this huge triumph not only impacts every corner of Argentina but also the rest of Latin America, as has already been seen in Chile where the Congress will start the process of a law decriminalizing abortion. Thus, it will be important to organize protests in support of the struggle of women in all of Latin America, until the feminist movement shakes the entire continent

Major Defeat for the Catholic Church

Throughout Latin America, religion — and particularly in Argentina, the Catholic Church, strongly linked to the State — has a great power. It receives millions in state funding. With our taxes we pay the salaries of priests and subsidize their private schools. All while they themselves are exempt from taxes! This church historically opposed all rights. It was against the law that prohibited slavery, against the law of compulsory schooling, against the law on women voting, divorce, marriage for same-sex couples, against sex education, and now all its sectors, from the most reactionary to the progressive “priests for the poor”, are opposed to the legalization of abortion. With the Argentine Pope Francis at their head, they lobbied strongly against it and were defeated.

But it was also the other churches, especially the evangelical ones, which were defeated. Particularly following the terrible pedophilic acts of Catholic priests, these churches have gained a lot of influence, especially among the poorest sectors.

This victory strengthens us for the next struggle we have before us: the separation of the church from the state.

Concessions to the Reactionaries

Celebrating this triumph should not make us lose sight of the fact that the approved law is not the one that was collectively drafted by ”La Campaña”, but one drawn up by President Alberto Fernandez which contains several negative aspects that were deepened at each stage of the bill’s passage.

In the face of the massive Green Tide, with the population increasingly in favor of abortion rights and his opponent for the presidency, Mauricio Macri, against it, Alberto Fernandez took a position, and had to include legal abortion in his campaign promises. This was a promise he tried to break all the way through 2020. First, he cast aside the bill drafted by “La Campaña”, and produced his own. To reassure the reactionaries, he presented together with the right to abortion, a law for the “protection of maternity” by which the State will subsidize for a thousand days any mother who decides to have her child.

With the advent of the pandemic, he used it as an excuse to avoid discussing the bill in Congress because, according to him, there were other more important issues. Once the quarantine was decreed, he said that it could not be processed because this issue generates discord and we, the Argentines, must be united against the virus. And besides, thousands of people would mobilize, breaking the quarantine. In the middle of the year and when the quarantine was being relaxed, his new excuse was that the health system was not prepared. Finally he said that in 2020 there was no time to deal with the project. But, as December approached, and with the need to vote on the pension adjustment requested by the IMF, he decided to allow the abortion law to be discussed at the same time as the pension adjustment law. The focus of the debate thus shifted from something regressive to something progressive.

Once the bill was presented, more negative modifications were made to it, the most serious being to facilitate “conscientious objection”; allowing social workers, clinics and private health institutions to refuse to carry out the termination of a pregnancy if all their professionals, protected by their religious beliefs, declare themselves to be objectors. This is very serious, especially in the villages in the interior of the country where there is a shortage of doctors. This is already being used by anti-choice groups to refuse to comply with the law, as happened recently in the province of San Juan, where one of the two largest public hospitals said they would not perform terminations because all of their gynecologists are conscientious objectors. The original project of “La Campaña” not only did not include conscientious objection but prohibited it.

On the other hand, the approved law penalizes with prison sentences of 3 months to one year, any pregnant person who performs an abortion after the 14th week of gestation. The “La Campaña” project did not include any penalizations.

Then, at the last moment and when no more modifications could be made, the President committed himself to remove from Article 4(b) the “integral health” of the pregnant person as a cause for abortion. This casts aside, for example, psychological or social health and violates the concept of integral health established by the WHO and ratified by Argentina in the international conventions on human rights.

Unfortunately, the leadership of “La Campaña”, politically connected to the ruling Frente de Todos party, let all these setbacks pass by without calling for mobilization throughout the year. Mobilization was necessary to put pressure on the government and, with the proper social distancing and in compliance with health protocols, it was possible, as demonstrated by other sectors that took to the streets for their rights. In this way, the government, only feeling the active pressure of the anti-choice sectors, with the excuse that concessions were necessary to obtain the votes in Congress, gave in more and more. This is a false argument anyway, since the Frente de Todos has a majority in the Senate. If they really had political will they could have voted on the full “La Campaña” bill and en bloc, as they did on the pension adjustment law to obey the IMF!

For the law to be valid it must be approved by the President and enshrined in legislation. This stage of regulation is important because only then will we know exactly how the law will be implemented — whether free access will be guaranteed in the public system, the obligatory referral of patients by private clinics that are “objectors”, how the process of declaring “objectors” will be done, etc. We can expect that more negative modifications will be incorporated, already requested by some senators.

We need Organization and Socialist Feminism

Regardless of the limitations of the law which was passed, this triumph strengthens the Green Tide that continues to spread and is gaining the support of more people who were previously against abortion and now have changed their position. This was demonstrated by the small numbers of people who have been mobilized by the anti-abortion sector, and even in the provinces where the church has the most weight, these sectors are increasingly in retreat.

The base of the movement is aware that this victory is not a gift from the government, but a result of mobilization and the struggle and that the fight for the effective implementation of the right to legal, safe and free abortion must continue. We must fight every time a hospital refuses to perform a procedure, or every time a judge wants to put a prisoner in jail for abortions performed after the 14th week.

To continue to move forward, it is also necessary to organize politically in a consistent feminist movement, that does not fall into Kirchnerist Peronist (the political tradition which Alberto Fernandez belongs to) opportunism, or sectarian petit bourgeois feminism that does not see the need for mass struggle. While these feminist currents have influence, the great vanguard that emerged in the fight for legal abortion naturally overlaps with those of us in the working class movement, who have for decades upheld these rights in our program.

This new generation of young activists joins the struggle without political prejudices, free of the ties and rigid discipline imposed by Peronist and other bureaucracies. They are quickly turning to the left and are part of other struggles like that against climate change. As the daughters of the working class and the increasingly impoverished middle class. they will also be fighting in the streets to ensure that the economic crisis will not be paid for by the workers.

The limitations of the Left Front (an electoral alliance of left organizations with representation in parliament) due to not intervening in a unitary manner and with a common policy prevents it from taking full advantage of the new space which has opened up. This great political space is conducive to the emergence of a feminist, socialist and internationalist organization like ROSA — the international socialist feminist initiative launched by ISA. That is why we invite you to get active with us to build large feminist and socialist organizations in Argentina and in the rest of the world for the colossal task we have: to throw out this capitalist and patriarchal system. To build a socialist society in which, as Rosa Luxemburg said, we are socially equal, humanly different and totally free.