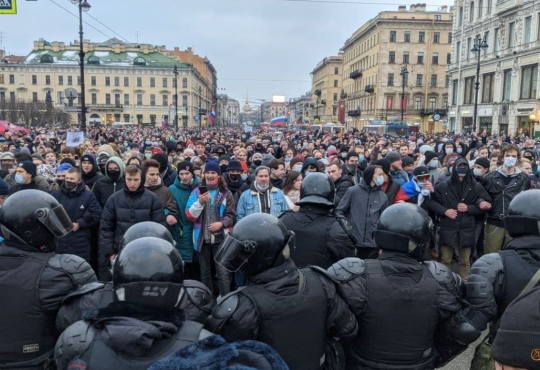 The report below was written on the first day of mass protests on January 23 by members of Sotsialisticheskaya Alternativa, Socialist Alternative’s sister section in Russia.

Over 100 cities across nine time zones, including regions where the temperature was fifty degrees below zero, were shaken by protests today. Some involved hundreds of people, more often thousands. According to Reuters, there were forty thousand out in Moscow. This is likely the biggest day of protest in post-Soviet Russia.

The protest was called by Alexey Navalny, Vladimir Putin’s leading opponent, who had been poisoned by agents of the Kremlin in August. He had spent five months being treated in Germany before announcing he would return to Moscow.

Last Sunday, Navalny was arrested shortly after landing at passport control, taken to a local police station where a kangaroo court with no lawyer sent him to prison for thirty days. He faces  a possible thirteen-year prison sentence. On the next day, Navalny released a long film about corruption in Putin’s family. Within an hour the film had been seen by over a million people, by the end of the week, fifty million views had been recorded.

As the call to protest began to spread, university and school administrators issued warnings to students not to participate. The state TV stations carried warnings from the Moscow mayor and head of police about the consequences of taking part in an illegal protest. As calls circulated on TikTok and other channels, the Consumer Protection Agency threatened to close them down. One report showed a group of members of the right-wing reactionary Party “For Truth” being briefed by police to act as provocateurs and then escorted into the crowd.

Protesters chanted “Free Navalny,” “Free all political prisoners,” “Putin is a thief,” and “Down with the Tsar.”

Streets across the country were filled with “Cosmonauts” — police dressed in riot gear ready to lay into the protests. Police violence was widespread. At the time of writing over 3,000 arrests have been made. This includes, according to the Trade Union of Journalists and Media Workers, over 50 journalists.

Challenges for the Movement

The biggest weakness of the protests is that there is no significant left force with a sufficiently strong organization capable of giving a lead. The protests were announced by Navalny’s office, but there is no organized structure that can reflect the wishes of those who participate. Although many are consciously protesting to demand the release of Alexey Navalny and other political prisoners, and there is clearly a mood against the current regime and corruption, so far the protests demonstrate an increasingly strong mood for change without demonstrating an understanding of exactly what change is needed.

Navalny is a businessman who started his political trajectory as a right-wing liberal. But he took an interesting turn in the last few years. Although he is mainly known as a campaigner against the corruption of Russia’s ruling elite, he reflects a leftward shift in the consciousness of Russian youth, who are fed up with high education costs, precarious wages, and the general stagnant and reactionary political position of the ruling elite and the so-called “systematic parties” including the Communist Party, which keeps Putin in power. When Navalny declared earlier last year that he supported Bernie Sanders, the remainder of the liberal opposition rounded on him in horror.

Even though Navalny has evolved “leftwards,” he remains a liberal, pro-capitalist politician and does not have a real program to offer to resolve the problems of Russian society. The Kremlin has made it clear more than once that it is prepared to use extreme measures to deal with opposition. The attempt to poison Navalny six months ago demonstrates that we need a movement that has a wide elected leadership, no longer dependent on one person.

Only a struggle against capitalism can offer a way ahead. So it is necessary for socialists to intervene energetically with a clear programme in this movement.

Sotsialisticheskaya Alternativa (ISA in Russia) argues that first of all we need to establish a firm base for this movement by setting up action committees that can decide strategy and demands for the movement. Although the main support for this movement currently comes from school students and youth in the universities and in precarious jobs, it is necessary to establish a firm link with the wider working class. Our demand for 300 rubles an hour minimum wage, and for free health care and education will be of critical importance here. Of course we also argue for a constituent assembly in which all layers of the working class are represented so that we can ensure the complete dismantling of the Putin regime and its replacement by a genuinely free and democratic socialist society.