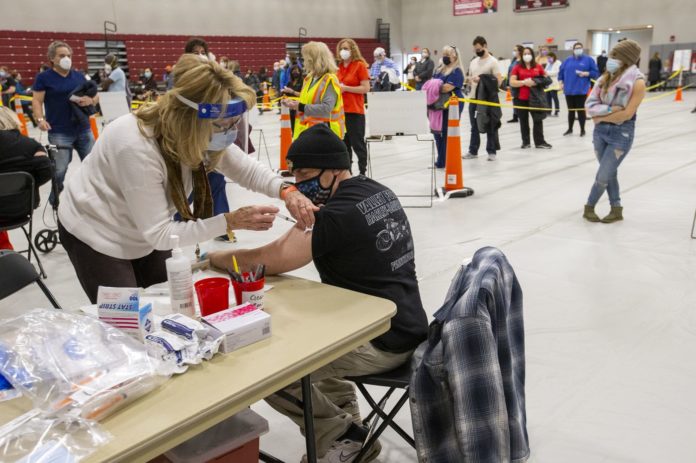 Trump made big promises at the end of his presidency, including that 20 million Americans would get their first vaccine dose by the start of January. In reality, as the new year rolled in, less than three million doses had been administered. Of course the pace has picked up, with more than 18 million doses administered, but this is still extremely sluggish. Supply shortages led to production hiccups, and already cash-strapped healthcare systems scrambled to pull together an administration plan. The end product of all this chaos was shelves full of spoiled vaccines and thousands more dead each day.

The news that Joe Biden would “move heaven and earth” to administer 100 million vaccines within his first 100 days in office was music to the ears of millions of Americans. The vaccine infrastructure as Joe Biden entered the White House was abysmal, sloppy, and unfunded. He has big plans to ramp it up and bring about an end to the nearly year long COVID nightmare. Will it be enough? Big promises beget big hopes.

As we warned in an early December article “From the Lab to Your Upper Arm: Challenges Ahead for the COVID Vaccine”:

“One tremendous challenge we now face is getting the vaccine from the lab’s loading dock to your upper arm. This is no easy feat, especially on the basis of capitalism where logical planning is thrown out the window in the pursuit of maximizing profits.”

And indeed logical planning was thrown out the window. When the gun went off and the Pfizer and Moderna vaccines were approved by the U.S. Food and Drug Administration (FDA), the CDC had yet to release vaccine guidelines, no money had been sent to the states to build up vaccine infrastructure, and COVID cases continued to dramatically climb.

It’s impossible to understate the mammoth pressures that have been put on healthcare workers in this crisis. COVID cases piled up while hospital workers made makeshift ICUs in ambulance bays with dangerous patient-staff ratios. And then the vaccine arrived. With no additional staff, training, or funding, they were expected to administer thousands of vaccine doses to yet unidentified priority groups. This has contributed immensely to the expiration of many of the vaccine doses that get shipped out. Even in the states performing the absolute best at administering vaccines, around 30% are still going to waste.

Contributing to the chaos has been the complete lack of guidance from the federal government. The CDC released a tiered plan for prioritization on December 20. But before that, no two states had the same priority groups or timing estimates for distributing the vaccine. Because the CDC guidelines were just that, guidelines with no mandate, states generally stuck to their original plans and operated under a patchwork of different rules.

The coordination between federal and state governments has been a total joke. Throughout the pandemic, governors have reported a “wild west” scenario where states compete against one another on the market for PPE and other needed supplies. This chaos has been replicated in many ways with the vaccine campaign.

Manufacturers have consistently shipped around 4.3 million doses per week, but the federal government only tells states their vaccine allotment for the week on Tuesdays. The states then have two days to place orders and develop plans to distribute those orders. Some weeks, states will get more doses than expected and scramble to find more people to vaccinate and other weeks they’ll receive less than expected and are forced to cancel appointments.

In New York in mid-January, a rumor circulated on social media that there were extra vaccine doses available at the Brooklyn Army Terminal. What looked like thousands of New Yorkers flocked to the site, jumping over one another to get the extra shot only to find out there were none.

Where some people jump at the mere whisper of an extra dose, others are refusing the vaccine altogether. While the levels of vaccine skepticism have dropped since October, there is still a significant number of Americans, even healthcare workers, who are refusing to get the shot.

It is not a surprise that such a high percentage of Americans are skeptical considering how criminally mishandled this pandemic has been. In the early days of this public health crisis, when the ins and outs of the virus were unknown, it was understandable that advice from healthcare professionals would change day to day. Where masks first seemed unnecessary to many experts, they are now acknowledged as crucial. But, we are now more than a year into the global outbreak and the chaos never resolved. In that context, some level of skepticism is understandable.

This is especially true for Black Americans who have a specific disdain for a healthcare system that has routinely neglected — or worse, abused — them. Harriet Washington, author of “Medical Apartheid” said of campaigns to encourage Black people to take the COVID vaccine: “it’s not a substitute for reforming the health care system. If we don’t reform the system, if we don’t make real, large steps toward addressing the inequities that cultivate distrust, then we’re going to have to do this every time we have a new health initiative. That’s a complete waste.”

We agree. Anything less than a top to bottom overhaul of our healthcare system is insufficient. We need an urgent transition to Medicare for All and the entire ecosystem of parasitic insurance companies, big pharma, and for-profit hospital chains need to be brought into democratic public ownership.

Joe Biden was inaugurated on January 20 and has declared a “wartime effort” to bring COVID under control. While some components of this plan are seriously lacking, his vaccine plan is very ambitious compared to what we’ve come to expect. His goal is to get 100 million Americans their first dose by his 100th day in office. Even this ambitious promise puts off herd immunity until at least next year, demonstrating the scale of spending and intervention we need to dig ourselves out of this crisis.

So what is couched in Biden’s vaccination plan? Use the Defense Production Act to speed up manufacturing, give billions in direct aid to states to build up their infrastructure, launch a public health jobs program and hire hundreds of thousands of healthcare workers, expand vaccination sites, and launch a public education campaign about the benefits of the COVID vaccine.

All of the proposals housed in Biden’s “wartime effort” are completely within reach for the Democrats who now control both houses of Congress. They can abandon calls for “bipartisan unity” and drive through desperately needed aid using budget reconciliation or abolishing the undemocratic filibuster rules. However, it is Democrats themselves standing in the way. If just one Democratic senator refuses to support Biden’s $1.9 trillion plan, it’s dead in the water.

If they’re going to pass the scale of spending needed to get even the vaccination infrastructure off the ground — let alone the rest of the aid package — it will require a tremendous amount of pressure being brought to bear on the Democrats.

It’s important to be clear from the outset that the scale of Biden’s proposals has nothing to do with his benevolence. This scale of spending and intervention is in service of big business who are desperate to get people back to work and restart their profit making machines. It’s for this exact same reason big business is stepping into the vacuum to drive vaccination efforts in states across the country.

In North Carolina, Honeywell International, Atrium Health, and Tepper Sports & Entertainment are combining their vast networks to launch a big business driven vaccination pilot program. They are turning the Charlotte Motor Speedway into a privately run and operated drive-through vaccination site. In Washington State, Starbucks is stepping into the game. And at the national level, Amazon’s vice president of world-wide operations sent a letter to Biden offering the corporation’s “operations, information technology, and communications capabilities” to the national vaccination effort.

Biden has already signaled enthusiasm about private sector intervention. This is the opposite of what we need. When big business supplements itself for public institutions, the end result is a race to the bottom. The logic of privatization is that profits have to be paid out to shareholders rather than invested in expanding and improving service. So not only does privatization diminish the quality of a service, it also undermines and erodes public institutions. We need to take the vast resources of these major corporations, like Amazon, into democratic public ownership and integrate them to build a high quality, transparent public healthcare system. The profits of billionaires like Jeff Bezos have no place in our COVID escape route.

This crisis presents an opportunity to take dramatic steps in the direction of a fundamentally different healthcare system in this country. One where big pharma price gouging and fragile employer-based insurance are a thing of the past. One where logical planning takes precedence over the profit-driven vampirism of billionaires. This is a future the Democratic Party establishment is fundamentally opposed to, and fighting for it will require taking them on as well.