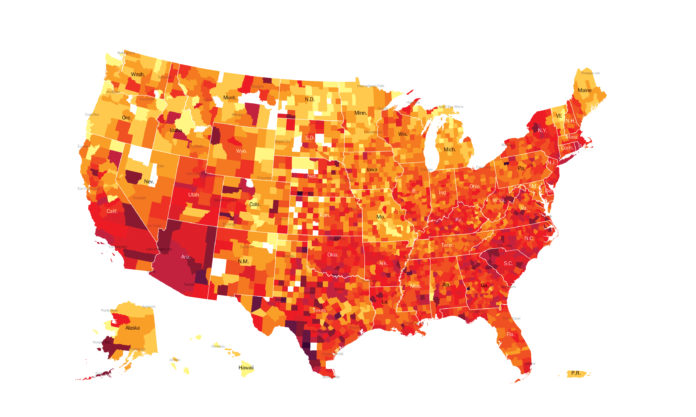 As Joe Biden takes office, the state-by-state heat map of COVID transmission is a sea of red. The sheer depth of the crisis is prompting him to propose bold measures on the issue of the pandemic. No less of a factor, big business and the ruling class are anxious to get the virus under control and resume profit making-as-usual.

Biden is pledging to administer 150 million doses of the vaccine in his first 100 days alongside ramping up testing. He’s proposing unemployment benefits be extended to people who quit their jobs because they feel unsafe. This is on top of the proposed $1.9 trillion stimulus package with needed emergency aid to states.

The stimulus, and Biden’s proposed measures, if passed, would be  a step in the right direction, but there is a serious question over which components of this proposal the Democrats are willing to fight for and which are just disposable bargaining chips.

With new COVID variants spreading throughout the country, nonessential businesses are mostly open in two-thirds of states. Malls are open in 13 states, offices in 16, casinos in 21, and bars in 34. Gyms are open in 48 states. Only seven states currently have stay-at-home advisories.

There are roughly 70,000 contact tracers in the U.S., while new cases regularly exceed 200,000 daily. Five states started promoting “DIY” contact tracing, asking those who test positive to do their own tracing. Overwhelmed contact tracers have reported that their calls often turn into conversations on what it would take for the individual to actually self isolate – with food and housing as key obstacles. Not only have new cases increased, but instances of contact for infected people have risen dramatically. No longer just members of the household or “COVID bubble,” but now entire workplaces, classrooms, bars and gyms full of strangers must be factored in when a person tests positive.

States and localities have had to work out their own guidelines for COVID response and haphazardly tweak restrictions as they go, while the federal government has at best played catch up, at worst provided ever-changing, contradictory advice.

Biden promises increased emergency funding is on the way to state and local governments, a crucial measure to address deep budget crises. However, over the last year, problems have emerged around mismanagement of earlier “flexible” relief grants. In Iowa, $29 million in COVID relief funds were misappropriated to purchase new cloud-based accounting software. Pennsylvania received $175 million from the federal government for rent and mortgage relief, but the majority was left unspent because the distribution programs were too hard for ordinary people to access. The remaining $105 million was handed over to the Department of Corrections.

Throwing money at the problem, without a clear plan alongside it, won’t solve the COVID crisis.

What Ever Happened to Flattening the Curve?

Researchers from the University of Kentucky and the University of Louisville studied the effects of lockdown policies between March 1 and April 27. They found that as many as 35 million cases were prevented by stay-at-home orders, closing bars and restaurants, bans on large gatherings, and school closures. A similar study published in Science found that “closing all educational institutions, limiting gatherings to 10 people or less, and closing face-to-face businesses each reduced transmission considerably.”

Biden’s COVID advisor Dr. Michael Osterholm argued in favor of a four-to-six week lockdown, with aid for business and individuals, as the best way to reduce infection rates, but then insisted this was not something he would recommend to the president.

Joe Biden was elected by voters who saw the pandemic as the most pressing issue facing the country, and who were more confident in Biden than Trump to adequately handle it. It is stunning that his robust pandemic plan includes few concrete measures to reduce the spread, including a painful absence of any discussion of lockdowns.

A study from Columbia University warns that without restrictions in place to stop the spread, even vaccinating millions of people will still not be enough to avoid millions of new infections and thousands of deaths.

While ensuring the vaccine is free and accessible to all should be a top priority, Biden’s singular focus on vaccination has the potential to be very damaging as other measures fall by the wayside.

Biden has already announced the death toll will surpass half a million next month and cases will continue to mount. In a recent press conference, he said “there is nothing we can do to change the trajectory of the pandemic in the next several months.” These premature declarations are alarming while thousands are dying every day. More deaths are preventable with swift action. Unfortunately for Biden, taking action of this kind would require going against the interests of profit.

What Would It Take to Stop the Spread?

Biden’s avoidance of the question of closing non-essential business exposes his key limitation: he is not willing to interrupt profits for the sake of public health.

Bernie Sanders and the Squad should not be afraid to call out the dangerous gaps in Biden’s plan and point to the measures we truly need. This could be the focal point of a true mass movement for public health centered around Medicare For All and taking Big Pharma into public ownership.

At the very least, we need a renewed “Phase I” lockdown in COVID hot spots to halt transmission. This means closing schools and nonessential business, with aid to keep small businesses afloat and 100% of lost wages paid out. We need a federal mask mandate for all Americans (not just on federal property and airlines as Biden has implemented). The duration of this lockdown must be used to revive contact tracing by hiring and training thousands of new workers, and to rapidly expand testing infrastructure so it is free and available to all.

Pandemic-fatigued Americans need to be paid to stay at home. This should be in the form of monthly stimulus payments directly into peoples’ bank accounts and mailboxes, not through opaque relief programs. Cancelling rent, rental debt, student debt, and medical debt would allow families to shelter in place without worrying about how to pay the bills. This ought to be paired with a reversal of Trump’s 2017 tax cuts and new taxes on corporations and the rich who have profited off the pandemic at the expense of workers. This would be a path to fund a dramatic intervention to truly stamp out COVID.

The pandemic is exponentially worse than it was in March. The stakes are higher as new strains threaten a new wave of deaths, which left to spread could weaken the efficacy of vaccines. The situation of working people is worse as we’ve borne the brunt of an economic downturn while continuing to be exposed against our will. U.S. life expectancy has seen its sharpest decline in 40 years. We must demand better than the old normal, and aggressively work to combat the inequality and exploitation created by capitalism which have been highlighted and worsened by the pandemic.