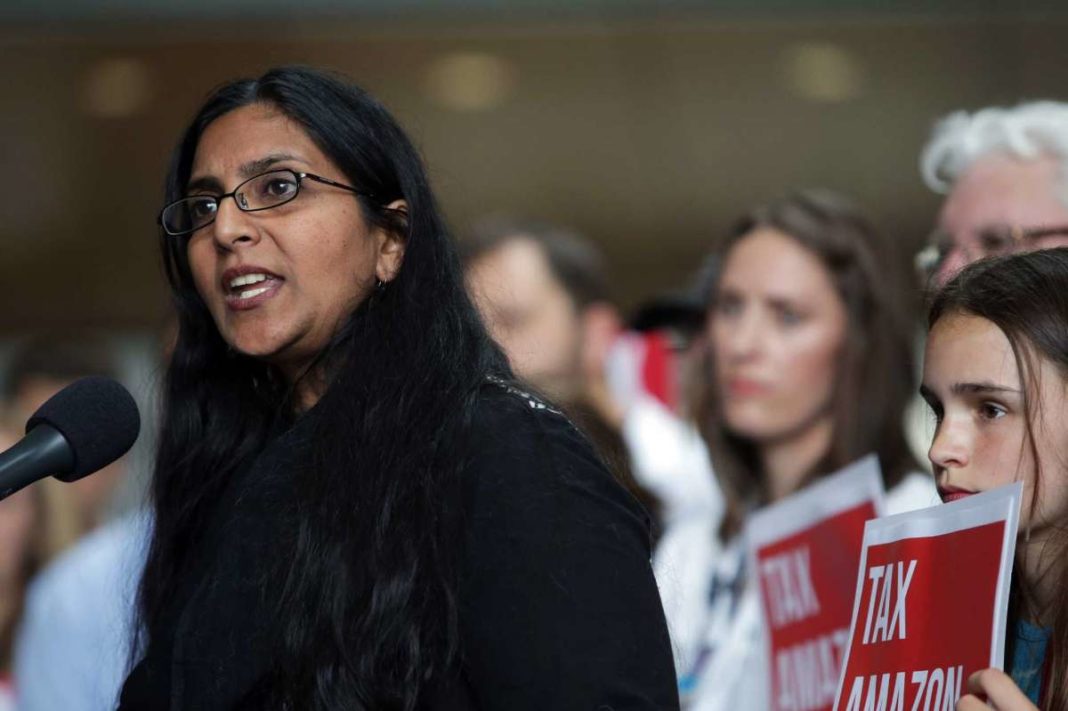 On Saturday, January 9, 2,000 working people and progressive activists tuned in to an online rally to reject the right wing and big business backed recall attack against Seattle City Councilmember Kshama Sawant. There, an inspiring program of community activists, socialist elected officials, DSA members, and labor leaders from around the world spoke to the urgent need to build a fighting grassroots movement that can defend against this attack on all working people.

The livestream chat was filled with greetings and messages of solidarity from working people in Seattle and around the world, eager to get organized and fight back in the midst of a historic pandemic-induced economic recession that has seen billionaire profits soar as ordinary people face a historic crisis of joblessness, evictions, and debt.

It is no accident that big business and the right wing are targeting Councilmember Sawant. The historic victories won by grassroots movements in Seattle, spearheaded by Kshama’s socialist council office, have served as an inspiration to working people around the U.S. and beyond. Furious about the impact of socialist politics and social movements in Seattle, the recall campaign — backed by corporate donors with limitless dollars — is now attempting an undemocratic do-over of Kshama’s 2019 re-election.

At a time of massive crisis, on the heels of the largest and most diverse protest movement in U.S. history, and with a new generation looking toward socialist ideas, the ruling class fears the impact that even one elected socialist who fights unambiguously for working people can have on a growing layer of society fed up with corporate politics and questioning capitalism itself.

Big Business on the Attack

Big business reaction is already on the offensive, working overtime with establishment politicians to roll back the hard-fought progressive gains of working people and oppressed communities and steer Seattle politics to the right. Less than a year after it was passed, Seattle City Council Democrats are now attempting to overturn the first-in-the-nation chemical weapons ban won at the height of the Black Lives Matter protests. And Democrats in the Washington State Legislature have recently reintroduced a proposal to dismantle the Amazon Tax through a statewide ban on municipal big business taxes. Kshama Sawant announced at the rally a new Tax Amazon Action Conference on February 6 to launch the fightback.

By targeting left elected leaders like Councilmember Sawant, as Indian American Community Organizer Khan Hassan explained, big business and the right wing are seeking to “clip the wings of the movement” and open up space to undermine it’s victories. And several elected socialists at the rally emphasized that this attack on Kshama’s socialist office, if it succeeds, won’t be confined to Seattle.

As Vancouver City Councilmember Jean Swanson stated, “The same forces that are fighting all of us — the big developers, big oil, big banks, politicians who claim they support our interests but abandon us when it matters most — they know that if they can defeat Kshama in Seattle, they will then come to my city and other cities and attack our movements. We can’t let that happen.”

As the pandemic induced economic crisis continues to deepen, with big business increasingly on the offensive, defending Kshama Sawant and the precedent-setting victories of social movements in Seattle is a crucial fight for all socialists and working people.

No Faith in the Courts

The crucial solidarity rally was organized as the Washington State Supreme Court continues to deliberate the final ruling on whether the recall attack against Councilmember Sawant is allowed to go forward. If approved, the right-wing can immediately begin collecting signatures to get the recall on the ballot. Unfortunately, working people can not have any faith in a fair ruling. Like the police, the courts belong to the state apparatus which, far from being a neutral arbiter, primarily serves the interests of the ruling class.

Castill Hightower, community activist for police accountability, powerfully outlined the double standard facing genuine movement leaders who dare to challenge systemic injustice when she said, “Kshama was the only one who didn’t break her promises to the Black Lives Matter movement. Yet, Kshama has been singled out for punishment by the political establishment. Not Breonna Taylor’s killers, not Jacob Blake’s killers, and not my brother’s killer.”

Just last week, this hypocrisy was on display to millions of working people, who witnessed the same police that had spent all summer terrorizing mass, peaceful Black Lives Matter protests with teargas and mass arrests actually allowing armed far-right protesters to walk unhindered into the U.S. Capitol building.

As Councilmember Sawant said, “We know that what our movements win has everything to do with our own organized strength, and we should have no illusions in the institutions of capitalism. We cannot rely on the courts for justice, just as we cannot rely on the police.” Defending against the unfounded recall against Councilmember Sawant, just like defending against the wider growth of the far-right, will take organizing in our unions, workplaces, schools, and communities.

Building a United Movement to Defeat the Right Wing Recall

In the crucial fight to defend Councilmember Sawant from big business and right wing reaction, Chicago Alderman and DSA member Byron Singo-Lopez emphasized that working people need to look to the successful example of movements in countries like Bolivia, which through mass mobilization succeeded in shutting down the right-wing coup against Movement for Socialism President Evo Morales.

Grassroots organizing power was on full display at Saturday’s rally when the Kshama Solidarity movement raised an astonishing $27,000 to defend Kshama against the unfounded recall! Over 50 new people signed up to volunteer — in addition to the over 200 working people who have already volunteered with the Solidarity Campaign — and hundreds more joined the Kshama Solidarity Facebook Action Group to continue getting organized.

But with the big-business backed recall campaign preparing to drop the over $220,000 they’ve amassed in dark money from corporate CEOs and anonymous right wing donors, our movement can’t afford to slow down. To win, it will be absolutely necessary to continue growing the movement by organizing working people around a “Decline to Sign” campaign against the right wing recall, by linking the fight to the defense of the historic Amazon Tax, and by broadening the fight by going on the offensive for working people in the midst of a historic economic and public health crisis.

As Councilmember Sawant stated, closing out her powerful speech, “The left has the responsibility to address the urgent needs of the working class – and that means, as a starting point, fighting tooth and nail for Medicare for All, comprehensive COVID relief, a socialist Green New Deal, and preparing the ground to launch a new party. This is a crucial juncture in history, and we cannot accept a false unity with the corrupt Democratic establishment. We instead need to build the powerful unity of millions of working people and the oppressed to fight for a different kind of society.”

The momentum coming out of Saturday’s powerful rally will be a critical launching-pad for what is bound to be an all-out fight with Seattle’s ruling class for the future growth of independent left and socialist politics nationally and internationally. The incredible solidarity that was on display will be crucial in the defense of Kshama Sawant’s socialist office and for the larger fightback against crushing austerity, racist oppression, and the system of capitalism itself.