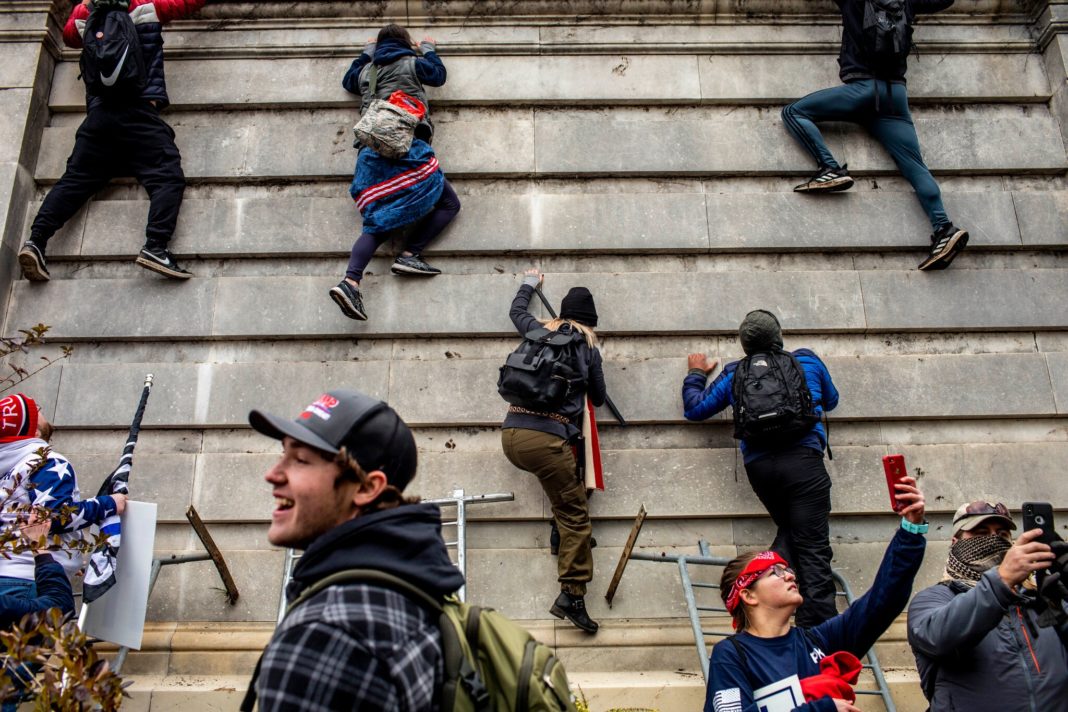 First came the notification: “Pro Trump mob breaks into Capitol building.” Then, “Congressmen being told to hide beneath their chairs,” followed by, “They’ve shot into the chambers.”

The storming of the Capitol shocked hundreds of millions across the U.S. and around the world. The chaos that took place inside one of the pillars of American power is in many ways an embodiment of the multi-faceted crises that have engulfed the country. For hours the Capitol was under occupation by a mob, led by far right and fascist elements, determined to overturn the results of November’s election.

Shortly after the Capitol was breached, Members of Congress were moved to a “secure location” as the far right stormed the House and Senate chambers. They wandered through the halls of Congress, stealing Nancy Pelosi’s mail, tearing down paintings. One man even walked out the front door holding an entire podium.

The complete unpreparedness of the Capitol Police for the assault on the Capitol stood in stark contrast to the way the police responded to Black Lives Matter protests this past summer. Thousands of National Guards were mobilized to “protect the Capitol” during protests on June 1 while brutal tactics were used in city after city. It has been revealed that the far right was openly planning this operation on social media for weeks, and even that did not trigger a law enforcement response.

In the weeks and months leading up to “the insurrection”, Trump made no attempt to hide his ambitions of a coup. (Remember, “Proud Boys stand back and stand by”?) Up until last night, he has repeatedly stated that he will not concede or respect the results of the election. He set the stage for yesterday’s events throughout his 2020 campaign. He warned about widespread voter fraud and mail-in ballot scams. Trump made absolutely clear that anything less than a blowout victory for his campaign might as well be a stolen election.

After the election, Trump, besides filing 60 lawsuits, sought to coerce Republican officials in key states into overturning the results. Most recently, he sought to intimidate the Georgia Secretary of State, Brad Raffensperger, to “find” 11,000 votes on a call which was leaked. He has engaged in discussions with conspiracy theorists about declaring martial law. Finally he tried to get the vice president, Mike Pence, to agree to unilaterally overturn the election results during the Congressional certification.

Before marching to The Capitol yesterday, Trump held a “Save America” rally where he decried disloyal Republicans like Mike Pence and Mitch McConnell, who were moving ahead with certifying Joe Biden’s victory. Trump called on his supporters to march to The Capitol and target “weak Republicans.”

At a December pro-Trump rally in D.C. to “stop the steal,” Nick Fuentes, a far right figurehead and avowed white supremacist, shouted: “We promised that if the GOP would not do everything in their power to keep Trump in office, then we would destroy the GOP.” This was followed by an enthusiastic chant from the crowd: “Destroy the GOP!” Trump himself has called for jailing the Republican governor of Georgia and denounced Republicans who opposed him as “RINOs” (Repubican in Name Only).

As we have consistently warned, despite Trump’s election loss and the likelihood that his attempts to overturn the election would fail because of the opposition of the corporate elite and key parts of the state apparatus, the far right is not going anywhere. In fact, under a Biden administration and the ongoing capitalist crisis, they are poised to grow even further.

While the actual fascist and quasi-fascist groups still remain relatively small, it is quite possible that we are now witnessing are the early stages of a split in the Republican Party and the development of a new right populist party made up of Trump’s hardcore.

The lines of division in the Republican Party were starkly illustrated in the debates in Congress yesterday. When the Senate reconvened after the far right forces were finally cleared out, most Republicans who were going to support the “objections” to the results backed down.

The debate reflected how shaken the establishment and the ruling class — which the Senate more accurately reflects — were by yesterday’s events. Particular emphasis was laid on the damage this would cause to U.S. “standing in the world” (i.e. to the ability of imperialism to use its “democratic” credentials to protect its interests). The votes on the objections to state certifications in the Senate were 96 to 3 and 93 to 6. In the House of the other hand, the majority of the Republicans (over 120) refused to back down even in the face of scathing attacks including from a minority of Republicans Congressmen.

Overall, yesterday’s events were a defeat for Trump, forcing him to formally concede in the face of enormous ruling class pressure. This was something he had no intention of doing at the start of the day. It is of course possible that he will change course again in the coming days but the political establishment as a whole, including key elements of the Republican leadership, are preparing to evict him from the White House if he tries to stay after January 20.

Republican divisions were also a key reason why Republican incumbents lost their Georgia Senate seats. Part of Trump’s base refused to vote for Loeffler and Purdue, in part because of the  general sense among Trump’s supporters that the election would be rigged. Former Trump lawyer Lin Wood spoke at a number of MAGA rallies discouraging Georgia’s Trump supporters from voting for Loeffler or Perdue because they’ve been insufficiently loyal to Trump. He said: “They have not earned your vote. Don’t you give it to them.”

As the dust starts to settle on yesterday’s events, millions are wondering: what the hell comes next?

The political establishment in both parties are running their mouths about the need to recapture the soul of the American people. Play-nice-politics and returns-to-normal. Biden has urged “simple decency.” He also has a long history of prizing “bi-partisanship” with reactionary Republicans. Biden may see McConnell’s pivot away from Trump as a signal to go further down this path. Many people see through these hollow platitudes and are wondering, “ok but really, what next?”

Amid the fear about the growth of far-right forces, the left and labor movement is presented with an urgent task. History teaches us that the only real defense we have against the threat of the far right which is a product of the decay of capitalism is a united, mass, multi-racial, movement of working class people. We saw this just a few years ago in Boston where 40,000 marched against the far right in the wake of Charlottesville and put them on the back foot for a whole period.

However, rather than taking this opportunity to call for mass action to shut down this attempted coup, left leaders like Alexandria Ocasio-Cortez are facing the wrong direction. Rather than issuing a call for mass demonstrations, or even vaguely urging the left and labor movement to get organized, she tweeted: “Impeach.” This has been followed by a hurried effort among squad members to draw up new articles of impeachment. In a similar vein, Cori Bush, newly elected squad member, is introducing a resolution to expel the Congressmen who “incited this domestic terror attack.”

These tactics would be fine as a side dish to a much larger strategy to mobilize working people, but that is not what these left leaders are doing. They are going no further than establishment Democrats like Chuck Schumer who is calling on the Cabinet to invoke the 25th Amendment and remove Trump from office.

AOC and the squad should be calling for mass demonstrations and sustained organizing against the far right. They should be pointing out that it is precisely the neoliberal agenda pursued by both corporate parties that has fertilized the soil for the far right. They should be highlighting the robust set of reforms needed to undercut this rightward polarization including $2,000 stimulus checks, Medicare for All, a Green New Deal, and a major tax on the rich.

The further development of these right wing ideas is very dangerous for working people, oppressed people, and the entire left. We need decisive and bold leadership on the left to meet this task.

In the middle of yesterday’s madness, the AP called the two Georgia races for the Democrats — giving them control of both Houses of Congress and the White House.

Many Americans with rent due and bills piling up, will be happy to see the back of Mitch McConnell who blocked $2,000 stimulus checks which even Trump supported.

There will be tremendous relief that both Trump and Mitch McConnell have been removed as immediate obstacles in resolving this crisis. This is all the more true now in the context of yesterday’s events. The Democrats will likely be forced to send out $2,000 stimulus checks and provide substantial relief to the states. Biden may be prepared to take decisive steps to ramp up vaccine infrastructure like using the Defense Production Act to boost production of vaccination equipment.

While this may well deliver Biden and the Democrats a temporary honeymoon, their win in Georgia is in other ways bad news for the establishment. It means they have no excuses and no Republican boogeyman to blame when they refuse to deliver Medicare for All, a Green New Deal, a tax on the rich and big business.

The next two years will likely clarify for millions of people that the Democrats are broadly not to be trusted when it comes to fighting for working people. This will put squarely on the table the need for working class political independence from the Democrats.

The establishment will resolutely oppose widely popular progressive measures like Medicare for All which are anathema to their corporate paymasters. Without a Republican to blame, they will be forced to explain their hostility to progressive politics. How the squad and Bernie Sanders relate to this in the next two years will have dramatic consequences for the left.

Beat Back the Right, Build the Left

We have no faith that the Democratic establishment or the state itself can or will neutralize this threat, and it is crucial that the left and labor movement takes the lead in organizing mass demonstrations to shut down the far right and unite the multiracial working class around a program for real change. Wherever they try to carve out space for themselves, we have to meet them with a massive display of working class unity. Labor and left leaders have a huge role to play in popularizing this message but we also need to lay the ground rapidly for an independent party which represents the interests of working people and the oppressed.

We need to break from the hollow “decency” politics of the establishment and organize now to defeat the right and to win crucially necessary reforms for working people, on the road to ending the capitalist system which breeds inequality, racism, sexism and fascism.