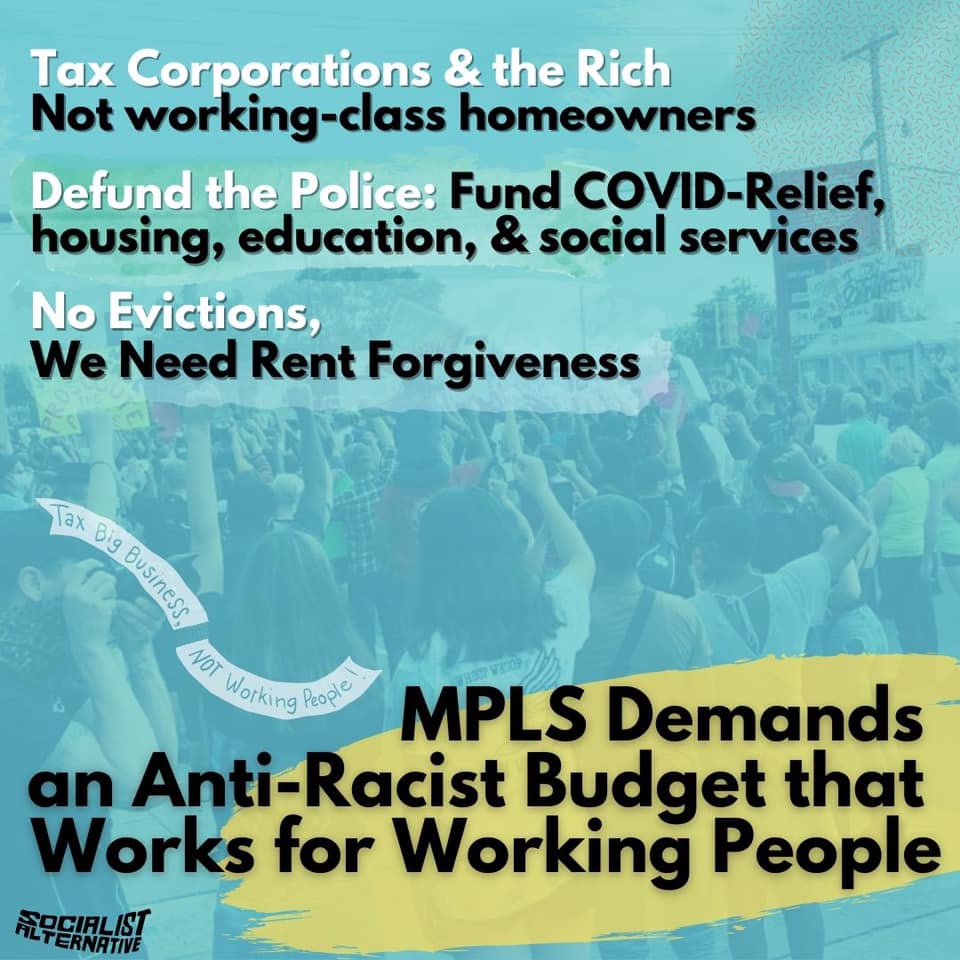 Democratic Party-run cities across the country are passing local budgets for 2021 in the middle of the coronavirus pandemic and after a summer of historic Black Lives Matter protests where “defund the police, fund communities” emerged as a key demand. In response to George Floyd’s murder, the rebellion in Minneapolis forced a majority of the City Council to make bold promises about dismantling the police department (MPD). While the movement won $7.7 million more for the Office of Violence Prevention (up from $2 million in 2020), this is a disappointingly minor step to address racist policing, compared to what was possible at the height of the uprising.

Proposed by three council members as the “Safety for All” plan, the $7.7 million was a far cry from the public promises to dismantle the MPD over the summer which all three Council members participated in. “Safety for All” included support for re-staffing the MPD with new hires and not challenging the number of officer recruitment classes proposed by the police chief. This indicates that their proposals weren’t intended to disrupt the fundamental structure of the MPD and that the council members continue to see police Chief Arradondo as an ally in this process of defunding the department. This is self-defeating: Chief Arradondo and Mayor Frey publicly called even this meagre proposal “irresponsible” when it was first published in the Star Tribune.

Debate over the 2021 budget is only the beginning of a fight over pandemic resources. We now enter an economic depression with 12.6 million unemployed nationally, Democrats and Republicans have been inching at a glacial pace toward stimulus measures that do not go far enough for working people. While the BLM resurgence began in Minneapolis, we can draw lessons from the grassroots mobilizations in cities across the country for useful strategies to strengthen a People’s Budget movement driven by working people.

Tax the Rich and Corporations to fund housing, jobs, and social services

The Minneapolis budget signed by Mayor Jacob Frey is shallow in its commitments to address the underlying crises that led to the police murdering George Floyd, and should serve as a warning to the movement of how hard-working people will have to fight against the logic of austerity.

Frey’s budget includes an increase of 5.75% in the property tax levy, and so a blanket tax on working-class homeowners. Even with a $26 million loss from state funding as a result of the pandemic, not a single council member proposed taxing the rich or any of the 17 Fortune 500 corporations in the Twin Cities. At the very least, the council could publicly demand that the state tax the rich to address homelessness, job loss, and COVID-relief.

Of the total $1.5 billion city budget (a 6% decrease from 2020’s proposal), the MPD allocation decreased from $193 million to $173 million, from a combination of citywide cuts and amendments. The $7.7 million won by the movement goes toward boosting 311 staffing and other programs to deploy mental health professionals rather than police. Also, $11 million of next year’s MPD funding is held in a new reserve fund and requires additional approval from the City Council before it can be released, specifically for hiring new officers or approving overtime.

Hundreds of people commented at the public budget hearings in November and December, with many organized around a People’s Budget that developed in opposition to the establishment’s proposal, put forward by groups made prominent during the movement last summer like Black Visions and Reclaim the Block. This mobilization played a key role in winning the transfer of nearly $7.7 million into mobile mental healthcare responses and violence intervention. Overall the People’s Budget was a positive development that Socialist Alternative MN signed onto, organized under slogans for people over profit, putting health first, defunding the police, and fighting to thrive not survive that mobilized people in Minneapolis beyond the existing activist base.

We support the broad aims of the People’s Budget and continue the fight to go much further at bringing working-class people and a mobilized labor movement into the fight against austerity. For example, the People’s Budget included a small business grant to fund a sex worker co-op strip club, which misses the mark when COVID relief and rent forgiveness would immediately cut into the crisis facing workers whose jobs have been displaced by the pandemic. To best position the multi-racial working class to defeat the real looters in society, we cannot limit ourselves to fighting around the edges for harm-reduction and accept that budget cuts put forward by the establishment are the only reality.

The 2008 crisis kicked off when the housing bubble burst, and foreclosures ripped through working-class Black, Latino, and immigrant communities after they were targeted for predatory loans. Answering the crisis for renters with buyback options that require millions of up-front capital will not prepare working-class communities for the struggles we face now. And while it would be a step forward to have legal representation in housing court, as proposed by the People’s Budget, we can draw lessons from movements like Occupy Homes that built mass campaigns against eviction and foreclosure, pulling in the wider working class into defending our neighbors against law enforcement sent by the big banks to carry out evictions.

Once again, we must prepare for a wave of mass evictions. Our movements must connect our neighborhood organizing with the struggle to win rent forgiveness for all who’ve fallen behind during the pandemic, comprehensive rent control without the loopholes and exceptions that grow big developer profits, and reversing the privatization of public housing by building high-quality, city-owned housing with union labor.

A new report showed that America’s 651 billionaires have gained so much wealth during the coronavirus pandemic that they could fully pay for one-time $3,000 stimulus checks for every person in the United States— and still be better off than they were before the crisis! The movement missed an opportunity to cut across City Hall’s “belt-tightening for all” by not clearly connecting our proposals to a tax on big business, like the movement and Seattle’s socialist Councilmember Kshama Sawant has done with the Amazon Tax victory. Broad support for community-led solutions in the People’s Budget demonstrated the instinctive solidarity in the working class but our movement can’t limit itself to the framework of what’s acceptable to the Democratic establishment.

The Political Establishment Will Always Try to Co-opt Our Movements

A survey in August showed that 72% of registered voters across all demographics and age groups in Minneapolis supported diverting funds from the police budget to non-violent intervention. At the same time, the political establishment aimed to co-opt the space created by the movement’s demands for structural reform by amplifying reports that homicide and violent crimes are increasing in cities across the country. Days after the budget passed, an in-depth profile analyzing thousands of pages of MPD internal reports showed that just 2.7% of complaints of police misconduct have resulted in disciplinary action between 2013 and 2019, and the widespread, dysfunctional culture in the department of rewarding officers with atrociously violent records. It’s completely understandable that working people fear increased violence and it will be incumbent on the movement to answer – however, analysts are admitting these aren’t the result of a single cause but rather the compounding crisis of pandemic, job-loss, distrust of the police, among others. A broader program to address the pandemic and the structural racism inherent to capitalism can take initial, crucial steps to address increased violence related to crimes of poverty.

Building strong movements with clear demands is our best defense against the political establishment watering down movement demands or passing policy riddled with big business carve-outs. Unfortunately, our fights face real obstacles, like the case in Chicago where DSA alderman Andre Vasquez voted for the Mayor’s austerity budget, tragically backed by the labor leadership, and on the basis of horse trading for future access. In the linked opinion piece Watson points out, “[socialists in office] should collaborate with ordinary working people to put forward an alternative to corporate business-as-usual politics and use a movement-building approach to stop attacks and win real victories.” Subsuming our demands to establishment logic gets the socialist left nowhere in its struggle against the billionaire class.

Taking lessons from Seattle, Council member Kshama Sawant’s office is currently under attack by a racist, right-wing recall campaign in retaliation for her seven-year record of fighting for working people, and the grassroots Tax Amazon movement. In Seattle, the yearly People’s Budget Movement isn’t limited to the amendments that her office proposes in the city budget process, although this is a key part of the struggle to strengthen renters rights, win homelessness services, and much more. In solidarity with the Black Lives Matter movement, Sawant was the only councilmember to support defunding the police by 50% to the last vote.

Drawing from these lessons, Socialist Alternative members in Pittsburgh in the Stop the Station coalition came together against the proposed building of a new police precinct. Now the campaign is polarizing on the city establishment’s austerity budget, fighting against the cuts, connected to taxing the big corporations to fund housing, transportation, and social services.

More time wasted by bipartisan bickering over COVID relief, the deeper working people will be pushed into a crisis that will take years for us to claw back from. Using all the necessary pandemic-safe precautions, we need mass community meetings to build the power for a fighting program to answer big business forcing us to pay for their crisis. We’ll need to learn from our victories and defeats to win anti-racist budgets that work for working people. Minneapolis’ City Council and Mayor are up for re-election in 2021. The moment requires movement-based, independent socialist candidates who are prepared to challenge the Democratic establishment and fight tooth and nail for a program that speaks directly to working-class people, and raise the call for a new party that can build these struggles into a memory for the workers and socialist movement to have a deeper, lasting impact.