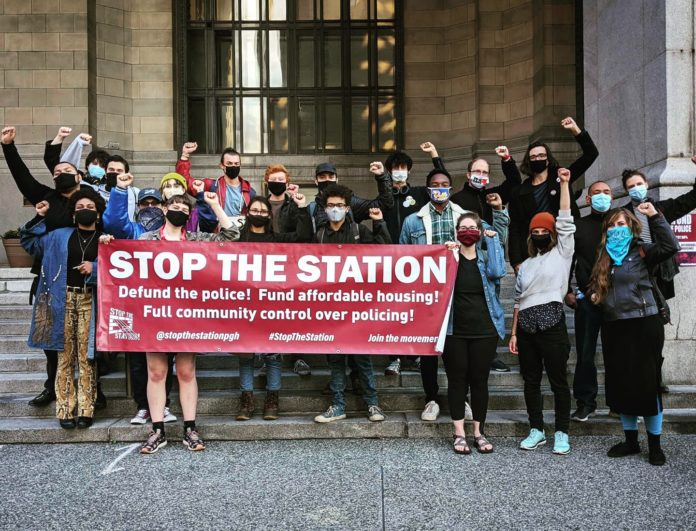 Facing historic budget shortfalls, Democratic leaders of cities across the country are choosing austerity and cuts to essential services even as calls to defund the police and tax big businesses are loud as ever. Pittsburgh’s Democratic mayor, Bill Peduto, is no exception. As Pittsburgh faces a $55 million deficit for 2021, Peduto’s recently proposed budget slashes funding for health, transportation, infrastructure, and social services and threatens over 600 city jobs. The city’s wealthy corporations and big developers remain unscathed.

Outraged that this budget fails to address police brutality, systemic racism, or drastic inequality in our city, the Stop the Station (STS) coalition is leading the fight to cancel the cuts and pass an explicitly anti-racist, pro-worker budget. Community members, members of Socialist Alternative and Penn Plaza Support and Action created the coalition after becoming aware of insidious plans to relocate the Zone 5 police station.

Now, we’re also fighting for other bold transformations needed to create a truly livable city for all. That means taxing big businesses and University of Pittsburgh Medical Center, the local profit-driven healthcare behemoth. It means no more money wasted on expensive police projects, like a $90 million police training facility, or the $3 million police station relocation as part of ongoing efforts to gentrify a historically Black neighborhood that residents and STS have been organizing against. It means divesting from a bloated police budget and using that money on what the community actually needs: permanently affordable housing and social services.

These goals have brought hundreds of community members together to organize and decide the nexts steps for our movement democratically. Socialist Alternative has played a leading role in the STS coalition, constantly making connections between anti-racism and working class movements and bringing in activists like myself and union members.

If working to stop our mayor’s austerity budget is the fight we’re focused on now, achieving full democratic community control of the police is the battle on our horizon. Community members and the Stop the Station coalition are discussing bringing the issue to the ballot. With tens of thousands of signatures required to run a ballot measure in Pittsburgh, this will be a huge undertaking, especially during a pandemic. But the past months have shown me that this community will never hesitate in fighting for Black lives and the working class.

On the day I write this, Allegheny county is reporting over 1,000 new Covid-19 cases in a single day for the first time. Meanwhile, a 17% cut to Emergency Medical Services is being considered in Peduto’s budget. This isn’t just a fight against a police station and budget cuts, it’s a movement to build an anti-racist, pro-worker city, in which every person’s health and wellbeing is prioritized over profits and repression.