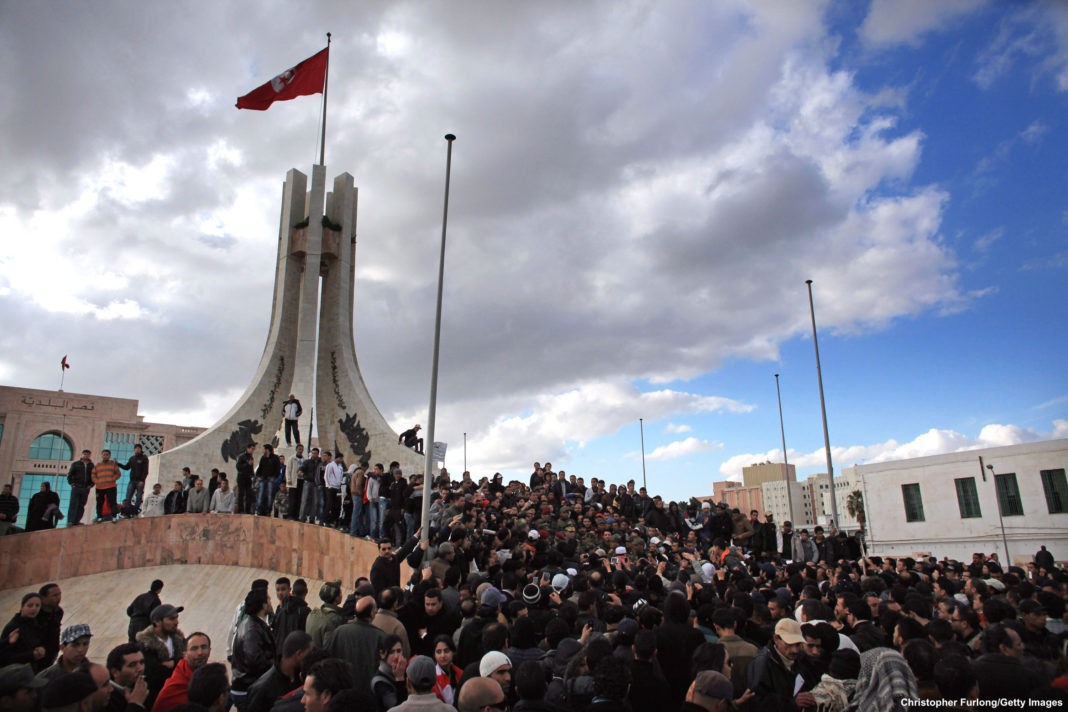 Today is the tenth anniversary of the outbreak of the Tunisian revolution, December 17, 2010 leading to the ousting of Ben Ali on January 14, 2011. It is impossible for us not to go back to these developments and see the important political events that have emerged since the outbreak of this historic event. The differences between then and now are found not only in the changes that have taken place in Tunisia, but also across the world.

It is sufficient to remember that the current government is the tenth government since the Tunisian revolution that swept the corrupt dictator Ben Ali out of office.

If this indicates anything, it is the state of political instability that the country is currently experiencing. We have known three prime ministers in less than 10 months, a sign that clearly shows the state of political chaos, and the accelerating collapse taking place within the “democratic transition” system. For the first time in the country’s political and parliamentary history, a government fell before it even took office, namely that of Habib Jemli, stillborn after the October 2019 election.

Elias Fakhfakh’s government collapsed with a resounding resignation during the summer, after only a few months in office. This was the result of growing political tensions and maneuvers surrounding a conflict of interests involving the Prime Minister, due to his ownership of shares in private companies that had won commercial deals with the state, and by the demands of the other careerist parties to “strengthen the governmental belt” by bringing them into the government. This is crystal-clear evidence of the incomparable rotting away of the whole political situation, so much so that a supposedly non-partisan government of “technocrats”, headed by former Minister of the Interior Hichem Mechichi, finally came out with the promise of putting an end to the state of governmental vacuum the country was in.

Mechichi’s government came to power after the main parliamentary players faced the choice of either finding a way to form a new government or having to face a re-run of the elections, in the state of political paralysis that followed the collapse of the “quadripartite governmental intersection” — the coalition between the Ennahda Movement, the Democratic Current Party, the People’s Movement and the “Long Live Tunisia” Movement.

Considering the mood of huge exasperation and anger against politicians in the streets, the decision to vote for this technocratic government was the only way to guarantee their political survival.

But despite this re-drawing of the map of unprincipled political alliances, with the creation of a new parliamentary front which unifies yesterday’s enemies, Ennahda, the Heart of Tunisia Party, and the Dignity coalition, Mechichi’s government has remained muddled and incapable of political action, as it is too full of political paradoxes.

For three months the government has followed the same political approach as its predecessor in dealing with the Coronavirus pandemic. After a massive wave of infections, it has finally agreed that there is no substitute for a “necessary coexistence with the pandemic”. This improvised decision comes amid an unprecedented deterioration in health sector conditions, and job losses exceeding 170,000. The economy has contracted by 20% and the unemployment rate has officially reached 18%, alarming figures which only serve to indicate that none of these governments has had any desire for real change. Rather, they have been mere puppets of the dictates of the imperialist powers, and of the International Monetary Fund.

It is important to underline that the frequency of social protests has been restored. The government thought it had closed the file of “El Kamour”, an agreement between the government and the protesters of the southwestern town of El Kamour reached after more than a month of negotiations following strong protests and the blocking of oil production sites by local inhabitants. But since then it has faced a new wave of sectoral and regional demands, strikes, sit-ins and social protests that has opened up in recent weeks. In the cities of Le Kef, Kairouan and Jendouba, regional general strikes have taken place, demanding fair development and employment for all, and the opening of cases of corruption against local officials. The Prime Minister has complained about the persistence of these protests, describing them as “anarchy”, and arguing that they must be stopped using the power of the law.

In addition to this policy of threats and state intimidation, which has been a constant feature of all governments in dealing with social demands and movements over the last decade, real difficulties have been evident in the process of the drafting of the finance bill and state budget. These have been made worse by the rotten political climate resulting from populism and the use of diversionary tactics aimed at confusing the public about the core issues at stake. Lately Parliament has been transformed into an arena of physical and verbal violence on a daily basis.

Cynically, this is what some parties try to market as being the disastrous result of the revolution, renewing their nostalgic claims about the extent of the success of the pre-revolutionary Ben Ali regime in providing public security and basic needs for the Tunisian people. This is an easy game to play in a country which, in a recent poll has joined the top 10 of the most “unhappy countries in the world” — along with Afghanistan, Rwanda and Lebanon.

In this atmosphere, statements by the national trade union federation, the General Union of Tunisian Workers (UGTT) are only aimed at resurrecting the so-called “national dialogue with all the components”. In the midst of such explosive political and social events, the trade union bureaucracy is always playing a duplicitous role vis-à-vis its own base, trying to extinguish the spark of the protest movements, having given itself the task of saving the mafia system and the oligarchy from collapse. This political behavior is such that the union bureaucracy has become part of the system’s structures and enjoys a high degree of financial, logistical and service privileges, and does not in that sense differ in essence from that of the system itself.

The attempt at an extraordinary, non-elected union conference to amend Chapter 20 of the union’s rules, which prevents the general secretary and the joint general secretaries from presenting their candidacy for more than two terms, has been the strongest indication yet of the false posture of the union bureaucracy in claiming to struggle to improve the conditions of the working class. The calls for a new round of “national dialogue” are only made by those who sit at the table of this dialogue, and who will never give up even a fraction of their privileges to put themselves at the level of the workers they are supposed to represent.

The social and political forces with which the trade union leaders want this “national dialogue” are not difficult to understand. To give a flavor of the nature of the political establishment, one should have a look, for example, at some of the draft bills that have been defeated by the parliamentary majority, with all its variation and shadings. They include the following:

The rejection of such measures, as limited as they are, only serve to highlight the obviously counter-revolutionary character of the Tunisian political class, and the impossibility to redress the ever-worsening situation facing the working people, the poor and the marginalized layers within the confines of such a rotten, capitalist system.

This follows the rise of populist currents and corrupt right-wing forces in all their different tones and nuances, which has resulted in a situation that can only be described as a theatre of political farce.

This is even more so since the left is now almost completely absent from the political and parliamentary scene, following the disintegration of the “Popular Front” coalition. The Popular Front, which was established in 2012 out of a desire among many workers and youth for a true political break with the old system, could have experienced a different fate and remained more unified on the basis of having worked out a revolutionary path to maintain a healthy separation between those who are friends and those who are enemies of the revolution. Instead, short-term electoral politics became the pivotal axis within that coalition, determining both its relations with the bourgeois political parties and the relations among its various internal components. Eventually it reached the point of no return, bringing the Front to an open split and complete electoral collapse.

The current volatile and unstable political reality facing the Tunisian ruling class should be exploited by the masses to push their demands to the fore and revive the slogans that have animated the revolution since its inception: “work, freedom and national dignity”. Something that the Popular Front never understood is that confronting the mafia system is a revolutionary necessity and not an amenable option within the framework of the “democratic transition”. There is an urgent need for a fighting program that offers a radical socialist alternative to the policies of capitalism and the dictates of the imperialist powers, an alternative to the debt and dependency options that this mafia system forcibly imposes on the masses. This is the most appropriate and only possible way to restore the course of the revolution started in Tunisia ten years ago. And it should be patiently and systematically explained in a way that is adapted to the practical needs of the masses and to their ongoing struggles — so that, as Lenin once said, they draw such conclusions by evaluating their own experiences.